The Baltimore City Board of Elections yesterday assembled for a quick online meeting to certify the July 19 primary election – a formality at this point to most people in the city, but not to all.

Because of the report of 12 missing flash drives containing vote totals on election night, candidate Kimberly Parks-Banks has asked for the certification to be delayed.

Returns from Baltimore’s in-person primary day voting were delayed about 24 hours, into the next day, as election officials searched for missing flash drives containing vote totals from machines at 12 of the city’s 296 precincts.

Although election officials later said all the thumb drives were either found or the data was retrieved from scanners, Parks-Banks said the lapse casts doubt on the security of the voting process, prompting her campaign to ask for a forensic audit to be conducted.

“Now is the time to put an end to this kind of shenanigans. Mr. Jones is not running a tight ship,” said Parks-Banks, an unsuccessful candidate for Clerk of the Baltimore City Circuit Court.

“We don’t know how they went missing. Were they stolen and then returned? Did they fall into a space behind somebody’s desk,” asked Sean Simms, an advisor to the campaign, who spoke to The Brew this week.

“These were errors – mistakes in the process and they need to be taken seriously,” said Simms, who estimates the 12 flash drives represent some 15,000 votes.

Yesterday at the Elections Board meeting, Simms confronted Jones about the missing thumb drives.

He mentioned Jones’ statements in a television news interview in which he said officials were looking for the flash drives.

“We may not know where they are, but they’re accessible by going to look for them,” Jones had told WBAL-TV.

Replying to Simms at the meeting, Jones framed it differently.

“No thumb drives were ever missing from the board of elections custody,” Jones told him, following up with this explanation:

“They were either found in the scanner or in places where it should not have been in. There’s a place – a pencil holder, a stick that’s supposed to be placed in – in some cases they did not put it in that particular area. We found it among the supplies or in the cabinet.”

“We may not know where they are, but they’re accessible by going to look for them,” Election Director Armstead Jones, to WBAL-TV.

As a back-up, “if a drive turns up missing, we run the ballots on a different scanner and put it on a new thumb drive,” Jones explained.

Asked what time the thumb drives were uploaded into the system, Jones said it was at “various times the next morning.”

Asked if the results would be audited, Jones mentioned that the standard automated review would be conducted by Clear Ballot Group Inc.

Simms pressed him on whether a more rigorous “forensic ballot” would be conducted.

“I can’t tell you about something being forensic,” the longtime elections director said, adding that “the election has been certified, so that’s on you to do what you think you need to do.”

“We will,” Simms answered.

Simns has sent letters of protest to the State’s Attorney’s Office, the NAACP,  and the U.S. Justice Department as well as the state Board of Elections in Annapolis.

Deputy Elections Administrator Nikki Charlson told the campaign in an email that the state “will  review the complaint and take the appropriate steps.” 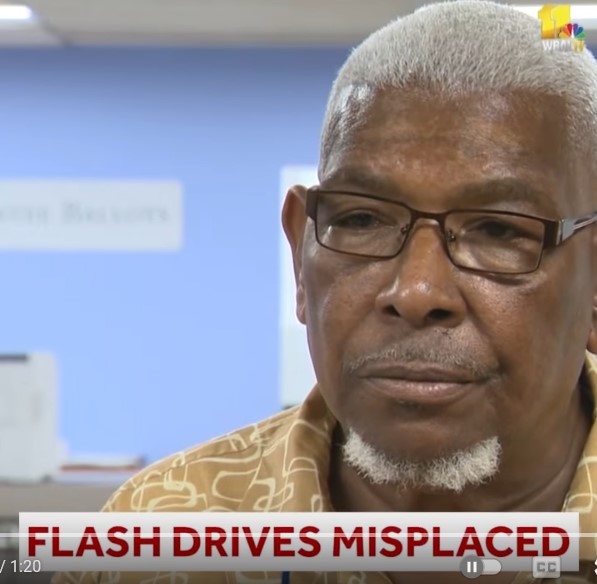 Parks-Banks is not the only candidate questioning the city’s conduct of the election.

Lenora Dawson, another clerk of the court candidate, has formally protested as well, focusing on the top vote getter in the court clerk’s race, 25-year-old Xavier A. Conaway.

Dawson’s campaign has filed a complaint with the state elections board alleging that Conaway did not run under his legal name.

Conaway is the grandson of former Circuit Court Clerk Frank J. Conaway Sr. and the son of Register of Wills Belinda K. Conaway, but his father is Milton D. Washington.

He went by the name Xavier Washington as a child and also during his time as a student at Temple University in Philadelphia, according to a spokesman for the school.

Dawson’s brother, Timothy Dawson, has asked State Prosecutor Charlton T. Howard to investigate, alleging that Conaway “did not change his legal name via a filing in the Maryland State Courts, nor did he submit an affidavit requesting a name change, allegedly committing election fraud.”

Conaway, who had been registered to vote as “Xavier Conaway-Washington” but updated his name to “Xavier A. Conaway” in February, told The Brew the name he is running under coincides also with his name in state motor vehicle  records and is correct.

He declined to say what name is on his birth certificate and whether he took steps to legally change it.

Some voters and lawmakers are criticizing election officials as well, noting that hundreds of city voters either never received mail-in ballots and or were sent ballots for the wrong district.

After hearing from constituents about these and other issues, and noting the missing flash drive incident, Councilwoman Odette Ramos has called for an investigative hearing.