At a community meeting in Woodberry last night, no one represented the Nebraska-based company that failed to obtain city and state permits before doing work on a television tower, sending a shower of lead paint chips onto lawns and playgrounds.

But at the start, Skyline Tower Painting’s name came up in a way that took audience members aback:

The owners of the TV tower, an entity representing WBAL, WJZ and WMAR, had belatedly applied for permits to bring Skyline back to resume work, the audience was told.

And the Maryland Department of the Environment (MDE) is prepared to let them do so.

Having trained its supervisors and workers and taken other actions to follow the rules, Skyline has been added to the state’s list of companies accredited to do the work, Stanley said.

“You’re asking us to trust the same people who polluted our neighborhood?”  – Woodberry resident Christine Sajecki.

This was confounding to Brian Pham, who pulled his daughter out of a nearby daycare center after potentially health-harming paint flakes started appearing in the center’s parking lot.

“You’re awarding one of the parties a contract that is tens of thousands of dollars when they chose to do the work without following the laws just a couple of weeks ago?” Pham asked. “It just seems crazy.”

“You’re asking us to trust the same people who polluted our neighborhood?” Christine Sajecki said to Stanley.

“Good for them getting accredited. But I don’t believe anyone in this community would welcome them back.”

Eventually, the microphone was passed to WBAL-TV president and general manager Dan Joerres, who spoke on behalf of Television Tower Inc. (TTI).

“The company that owns WMAR has dealt with Skyline before,” he said, explaining why TTI had selected this particular outfit.

As Joerres initially described it, Skyline was being hired to do the painting “on the part [of the tower] that’s been prepped so far” and “a multi-faceted plan” was being developed for  the rest of the structure.

But after community members continued to criticize the idea, he appeared to back off.

“I don’t think TTI is married to Skyline,” he remarked.

“Can we make the divorce official right now,” asked Sajecki, drawing agreement from the crowd. 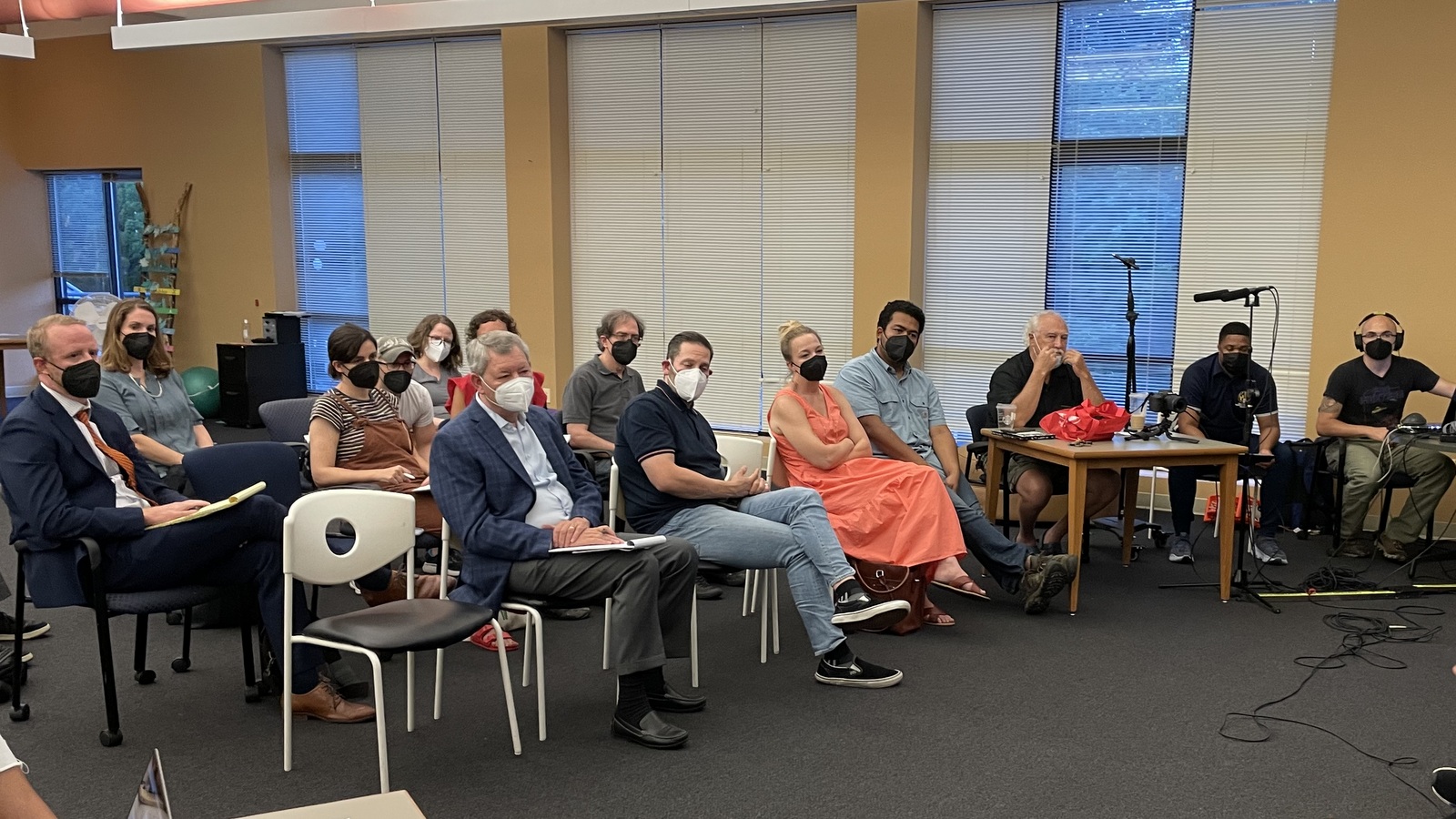 Part of the audience at last night’s meeting of the Woodberry Community Association. (Fern Shen)

Slow Pace of the Clean-up

It was the second community meeting held since the North Baltimore neighborhood discovered that the company hired to repaint the more than  900-foot-tall broadcast tower was removing the old paint improperly, letting chips fly down to the area below.

Audience members inquiring about whether the city or state would hold TTI or Skyline responsible for the improper work were told several times by MDE representatives that they could not discuss the issue of enforcement because an investigation was underway.

That didn’t set well with Pham.

“I don’t get why it takes a month-and-a-half to fine somebody who did something illegal,” he said. “I feel like I’m being gaslit here.”

Other residents said they were dissatisfied with the pace of the clean-up and what they perceived as a lack of urgency by TTI to be sure that chips had been removed from the neighborhood’s 600-some houses.

MDE’s Stanley said TTI teams had made 48 visits to houses to perform clean-ups. 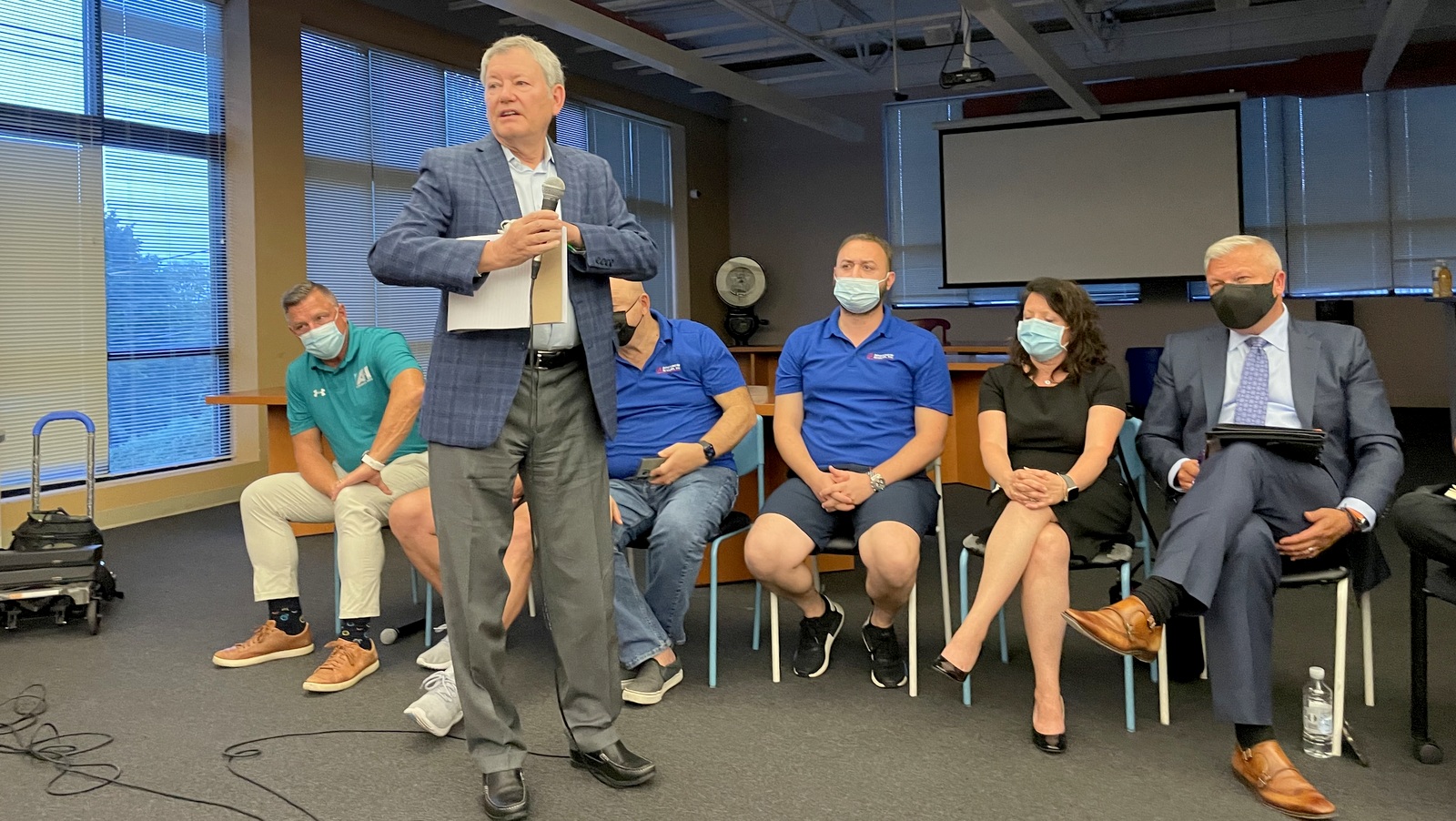 Questions from the audience about why more soil testing wasn’t being performed drew responses from a member of the TTI team who had not appeared at the July meeting – attorney John E. Griffith Jr. of DLA Piper.

MDE has said soil testing at the playground and in the Rockrose community garden did not exceed the state of Maryland’s hazard levels. A lead level of 66 ppm had been detected in one of the beds, Stanley said last night.

Several people asked if TTI would commit to soil testing at a future time when the flakes had a chance to break down and become a component of the dirt?

Griffith pushed back on that idea, citing a similar incident in 2018 that occurred at a tower in Seattle, Wash.

“Our understanding in Seattle is that they didn’t find any leaching problem,” he told the group, a point several audience members disputed.

Griffith wasn’t the only lawyer in the room. Pham said attorneys who have been advising him and other residents on possible litigation were also present.

Another questioner from the audience was contractor Patrick Molloy.

How important are network television towers, Molloy asked, when so many people have cable? 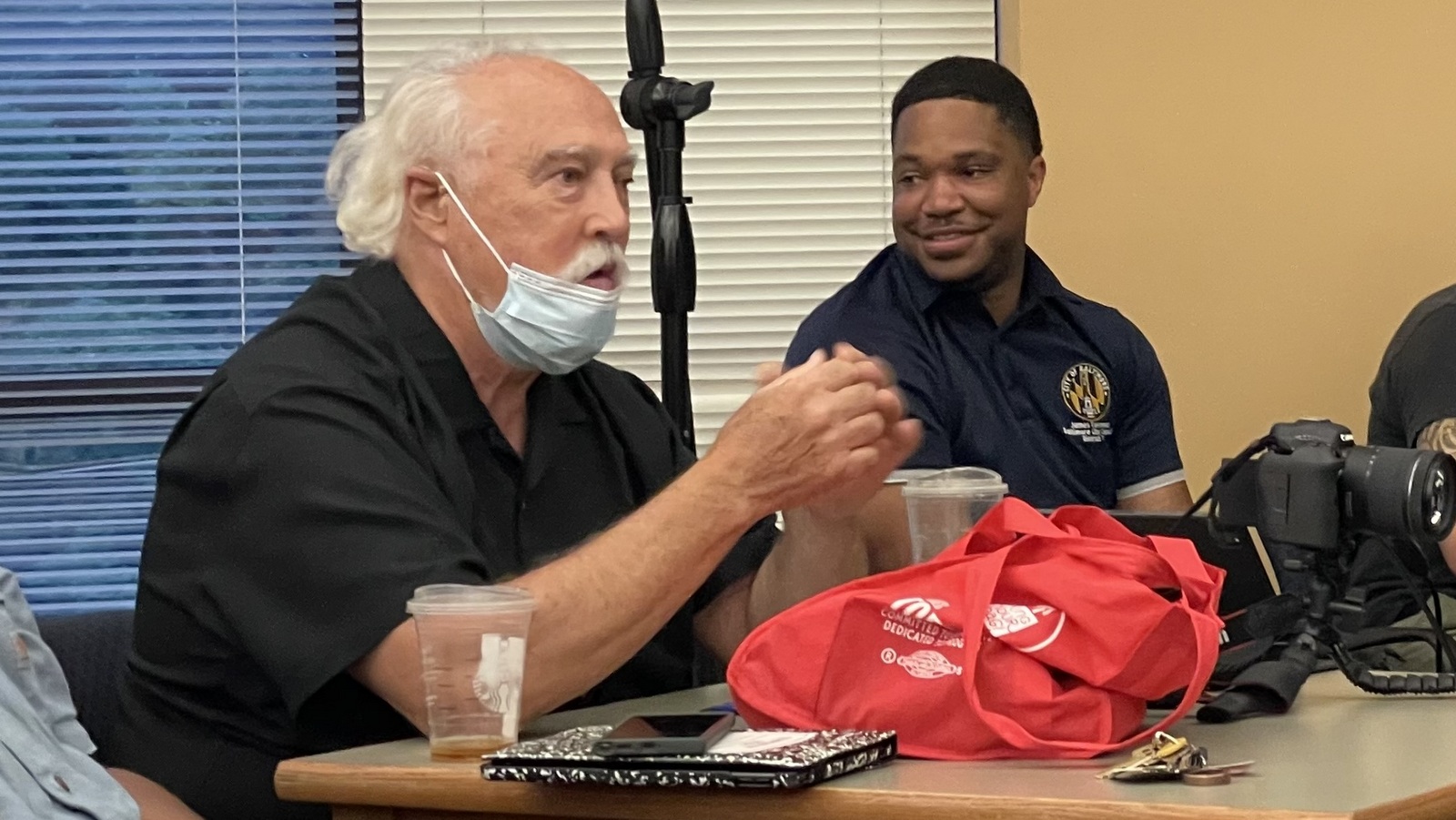 At a meeting about the lead paint release in Woodberry, Patrick Molloy chastises Baltimore television stations and their contractor. At right, Councilman James Torrence. (Fern Shen)

Molloy also chastised the company for a lapse that he said should have been avoided in the first place.

“They should have found all this out before work started. The cat’s out of the bag now,” he continued. The toxic material is “all over the neighborhood.”