A homeless advocacy group that had pitched tents at War Memorial Plaza in front of City Hall retreated today as workers prepared the space for tomorrow’s Back-To-School giveaway event.

As television cameras rolled, organizer Christina Flowers let the spokeswoman for Mayor Brandon Scott have it.

“Tell him don’t make me get extreme. I will take these tents all over Baltimore City if I have to,” Flowers said to Monica Lewis, named senior director of Scott’s Office of Communications last month.

“I voted for him, and he’s not here. He don’t engage the constituents like us,” Flowers said, giving Lewis a close look. “How long have you been here?”

“Three months,” Lewis said, explaining that Scott was away at a conference.

The confrontation eased as Flowers and others, who had come together as the Black Community Development Coalition, took down the red tents that they had set up at the plaza Wednesday morning.

Buses pulled up on Lexington Street to take people to shelters, a process overseen by the Mayor’s Office of Homeless Services (MOHS).

Flowers said her group had handed out tents to about 28 people, many of whom were taking up the city’s offer of rides to local shelters.

Did she consider the protest a win for her coalition?

“A partial win,” Flowers answered, saying she was going to meet with Deputy Mayor Faith Leach next week.

Responding on behalf of the mayor, spokesperson Kyana Underwood emailed this to The Brew: “MOHS and outreach partners focused on engagement with people experiencing homelessness today at City Hall to connect them to shelter and other services, and will continue to do so.”

In 2017, Flowers, founder of Belvedere Real Care Providers Network, was involved in a similar tent encampment protest in the same prominent location. That one ended with people being moved to a West Baltimore shelter. 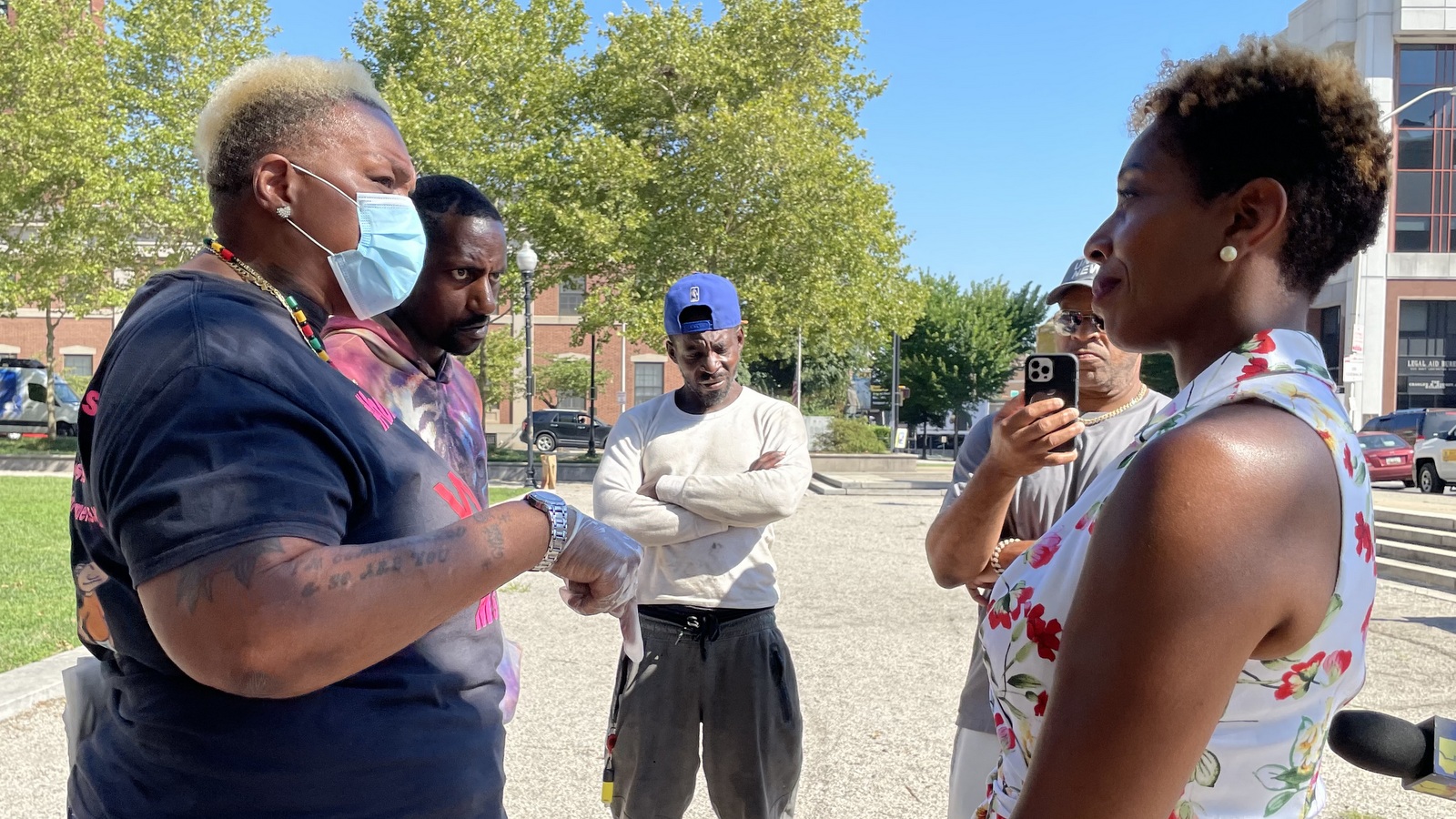 According to Flowers, homeless residents continue to be underserved despite the $90 million in federal Covid-19 relief funds that the Scott administration promised would be spent to purchase hotels and fund other programs to help ease the crisis.

Unhoused people, Flowers said, are currently living in at least 10 encampments around the city.

“She and the others are very passionate. The mayor is also passionate. He’s a son of Baltimore,” Lewis told The Brew, saying MOHS is doing its best to get services to people in need.

Lewis said protesters would be free to return to the War Memorial Plaza after tomorrow’s school event where “we’re giving away 5,000 backpacks.” 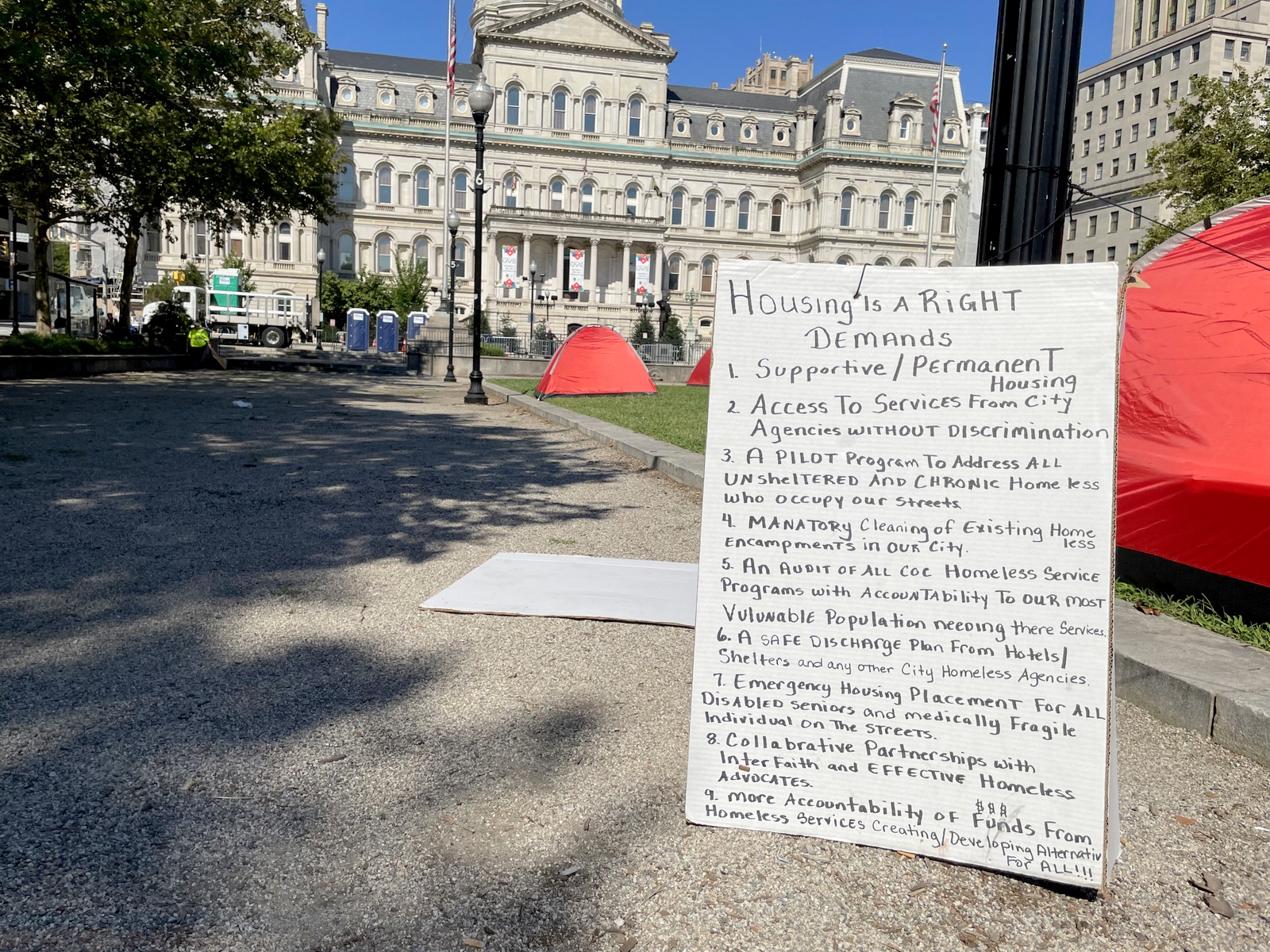 List of demands at protest on behalf of homeless people outside of Baltimore City Hall. (Fern Shen)

Yolanda Pulley, executive director of People Empowered by the Struggle, was listening to the interviews going on around her.

“It’s one thing to say you have services, but the problems out there are only getting worse, and that shows the services have failed them,” she said, calling for homeless programs to be guided by people who have actually experienced homelessness.

“That would give you people with compassion,” she said, looking at the workers poised to set up the Saturday event.

“There has to be a compromise,” she observed. “Yes, children need backpacks and school supplies, but people can’t be sleeping outside all over the city either.”