The three elected officials who sit on the Board of Estimates today handed over two vacant rowhouses to 12th District Councilman Robert Stokes, who now officially becomes a “city developer.”

The sale of 1830 and 1832 North Broadway for $18,000 – or  44% below an independent appraisal done in March – was approved without comment or acknowledgement as part of a vote on “routine” items by Mayor Brandon Scott, Council President Nick Mosby and Comptoller Bill Henry.

Stokes served on the City Council with Scott and Henry between 2016 and 2020 and now works with Mosby, a close political ally.

Appointed by Mosby to the Council’s economic development committee, Stokes passes on legislation involving the Department of Housing and Community Development (HCD), which agreed to sell the city-owned buildings to him under its vacant house program. 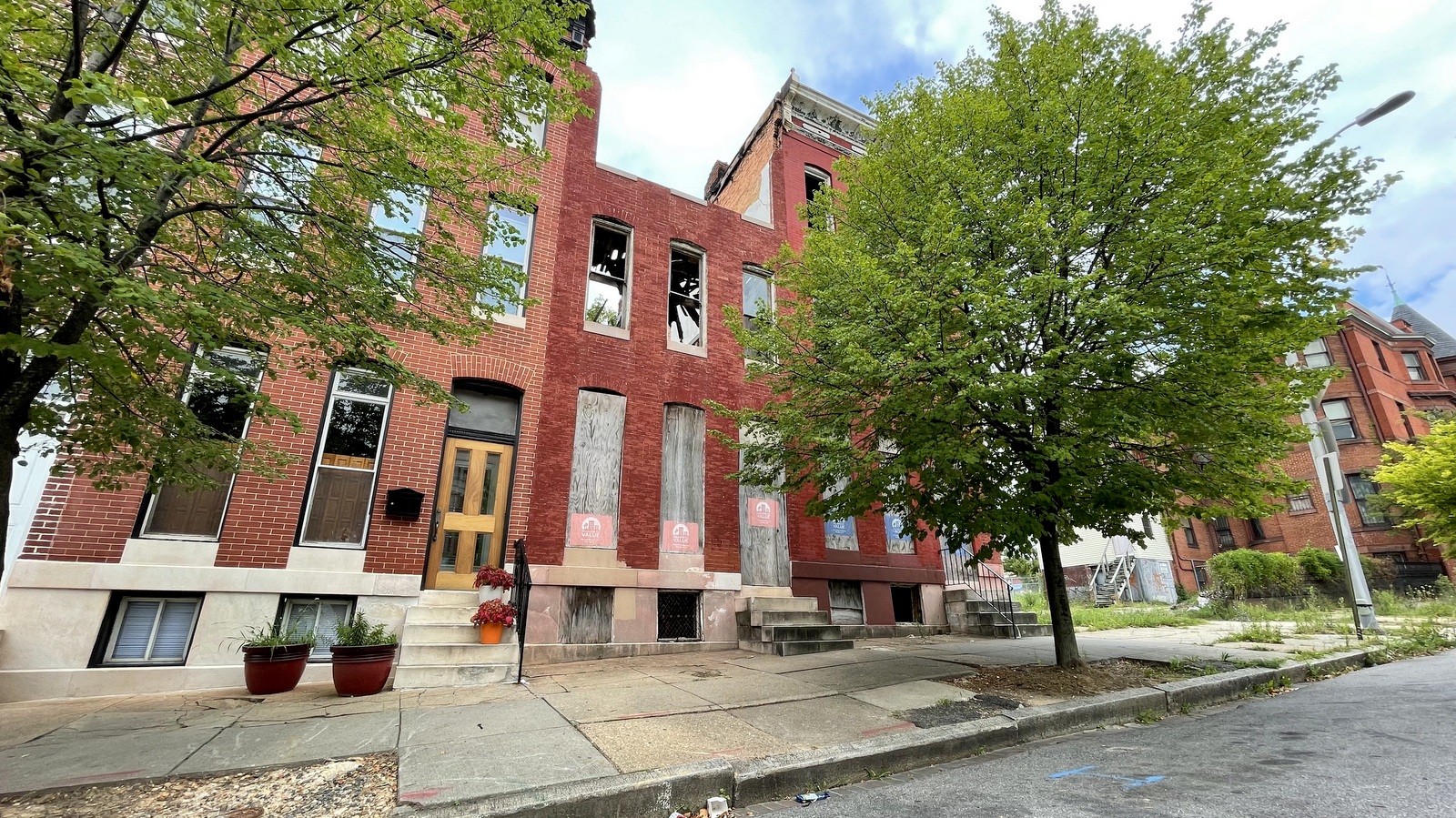 Properties behind the tree on North Broadway that were sold to Stokes at a low price “to serve a specific benefit for the immediate community,” says HCD. (Fern Shen)

Stokes has not responded to multiple attempts to hear about his plans for the buildings.

According to HCD documents reviewed by The Brew, “the developer” will rehab the houses at an estimated cost of $200,000 each and then sell one of the properties to a homeowner for $300,000.

Upon receipt of an occupancy permit, Stokes promises to live in the other house as his primary residence for two years and “will receive no city funds or incentives for purchase or rehab.” (Unclear is whether he could potentially receive lucrative historic tax credits.)

Before moving ahead with Stokes’ application, HCD asked Jeffrey Hochstetler, director of the Baltimore Ethics Board, whether a sale to an elected official would constitute a conflict of interest.

In a March 17 reply, Hochstetler wrote that “solely from the perspective of the Ethics Law and Ethics Board regulations,” nothing prevents a city official or employee from bidding on city property “so long as the city official/employee goes through the same process available to everyone else, does not exert any official control over that process, and does not otherwise receive any special favor or favorable treatment in that process.”

A third-party appraisal – to avoid “all appearance of a conflict of interest” – came up with double the price that Stokes will pay.

Hochstetler suggested to Mandy Breedlove, director of land transactions, that she seek an  independent appraisal of the properties to avoid “all appearance of a conflict of interest.”

This the agency did, and appraiser Wesley A. Barkley came up with a price of $32,000 for the two properties on March 28.

While the buildings were in deplorable shape, Barkley said they were big – each with 2,400 square feet of potential living space – and located in an area that was undergoing government-funded renewal and rising market demand. (One rowhouse on the same block of North Broadway sold for $283,000 last month.)

On July 15, Housing Commissioner Alice Kennedy acted on Stokes’ application, signing documents that set the sales price at $18,000, – or $14,000 below the appraised value.

The low price was designed, according to the agency, “to serve a specific benefit to the immediate community, help to eliminate blight and return the property to the city’s tax rolls.”

HCD did not seek other bids for the houses, which do not appear on the Buy Into Bmore website, or disclosed the sales price before it reached an agreement with Stokes, which the Board of Estimates officially sanctioned today.

• FOR MORE: City to sell vacant houses to Councilman Robert Stokes at a steep discount