The Boston-based nonprofit that had caused an uproar at a City Council meeting – its leader warning that the people he brought could turn riotous before insulting Mayor Brandon Scott and Councilwoman Odette Ramos – is holding an event next week in Baltimore.

And Ramos is advising residents not to attend.

“The whole City Council was sent emails inviting us to it. They’ve got a hell of a nerve doing that after what happened in April,” said Ramos, who used her weekly email to constituents to warn them away from the “Achieve the Dream” event scheduled to run September 8-12 at the Baltimore Convention Center.

Neighborhood Assistance Corp. of America (NACA) offers a program that tells borrowers they can purchase a home with no down payment and no closing costs.

The “Best in America Mortgage” the group offers is promoted as a way to make homeownership affordable for people with limited funds and poor credit profiles.

While she shares those goals, Ramos says that NACA has “poor customer service” and “strings people along” without delivering results.

“Months and months go by and the people who sign up for NACA don’t get the house they were promised, and my housing colleagues here in the city are the ones who have to clean up their messes,” she said, speaking today with The Brew.

”People who sign up for NACA don’t get the house they were promised”  – Odette Ramos.

Ramos said she can’t stop the event from happening (“I talked to the convention center and it’s a pre-booked thing”), but has composed a statement about NACA with a “buyer beware” message.

After “I called into question his business practices . . .  the leader of this organization tried to incite a riot, insulted me – not knowing about my years of advocacy in housing – and I fought back,” Ramos wrote.

“The people he had with him were not from Baltimore and were obligated to be there by the nature of their ‘volunteer’ requirement in the hope that one day they could get a house,” she continued. 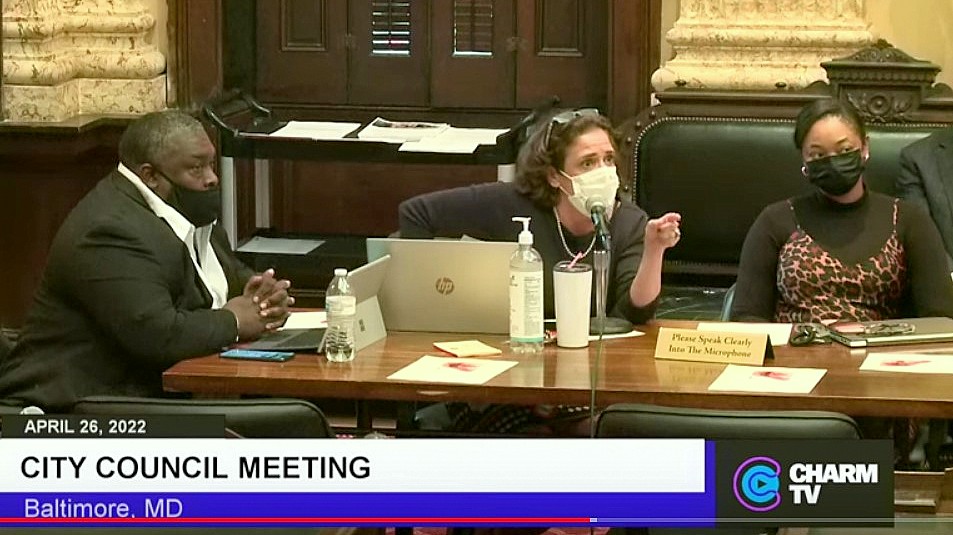 “Sir, you can’t accuse me of that,” Councilwoman Ramos says to Bruce Marks, head of NACA, at last April’s meeting. (CharmTV)

“She’s putting her personal political interests above her constituents – and she’s lying,” Marks said, referring to Ramos’ description of the group’s behavior on April 26.

Marks asserted in an interview that “there was no danger. People were absolutely respectful.”

That’s not how most perceived the at-times chaotic meeting called by City Council President Nick Mosby to promote his stalled Dollar Homes legislation.

Marks and scores of people he brought with him entered the Council chambers and filled it to standing-room-only capacity, chanting Mayor Scott’s name as the sound of banging and shouting could be heard elsewhere in City Hall.

(Video posted on social media pinpointed the source of the sound: Marks and a throng of his followers filled the hallway outside of Scott’s locked office door, with Marks at one point pounding on it.)

On the Charm TV video (above), Marks repeatedly remarks that he had brought “700 people” to City Hall and declares, “I want to make sure there’s not a riot outside.”

He says in the video that the mayor, who did not support Mosby’s bill, is “bought and sold by the real estate industry.”

Addressing Ramos, he makes the same allegation: “I don’t understand why you’re doing the bidding for the real estate community.”

“Sir, you can’t accuse me of that! I have been working in this field for 30 years!” she replies.

Six Council members, including Ramos, later wrote an op-ed criticizing Mosby for his handling of the matter.

“We collectively condemn the outrageous and dangerous behavior exhibited at City Hall,” they wrote. “The free exchange of ideas should never be accompanied by petty, personal insults or thinly veiled threats of a riot.”

Ramos’ email to her 14th District constituents in search of homebuying help includes a list of a dozen local agencies “that are respected in our communities.”

Marks today said that Ramos’ allegations about NACA’s poor customer service were made “out of ignorance.”

“NACA is the nation’s largest HUD-approved nonprofit homeownership and advocacy organization,” he said, urging Ramos to come to next week’s event.

He also noted that NACA has held multiple in-person “Achieve the Dream” events in Baltimore before – as recently as August 2019.