After some of those who attended Baltimore magazine’s annual “Best of Baltimore” party two weeks ago fell ill, attendees received an emailed survey from the Maryland Department of Health.

They were presented with a list of vendors who had provided nibbles at the August 18 event held at the American Visionary Art Museum and asked to check off whose food they had eaten.

But some people filling it out noticed an oddity:

All four restaurants providing food that were part of the Atlas Restaurant Group were missing from the list.

“We don’t understand why they weren’t there – we ate food from all of them,” said Cristina Layana, who said she had severe diarrhea and other symptoms that lasted for a couple of days after the event and that her husband is still seriously ill.

Layana, a 35-year-old from Edgemere, said the couple consumed food from Maximon, Ouzo Bay and the Waterfront Hotel, prominent eateries that are part of the all Baltimore-based group.

A fourth Atlas establishment serving food that night, the Italian Disco, was also left off the health survey provided to party goers by the state.

That omission rankled Layana and others.

“I don’t understand why they have not been transparent. We need information, they need to take responsibility,” she said in an interview with The Brew. “This is serious illness.”

“My muscles started aching, I had cold sweats. I almost fainted in the bathroom,” she said, noting that two friends who attended the party with them had similar symptoms.

Layana said she recovered after a couple of days, but her husband still has a fever and bad stomach cramps today. She said he got treatment at Urgent Care and from his doctor, who told the couple he probably has been infected with campylobacter, a bacteria that can infect humans, causing diarrhoeal disease.

She and other who attended that night speculated that Atlas was left out because the restaurant chain is a major advertiser in the magazine.

“I can’t see any other explanation,” Layana said. 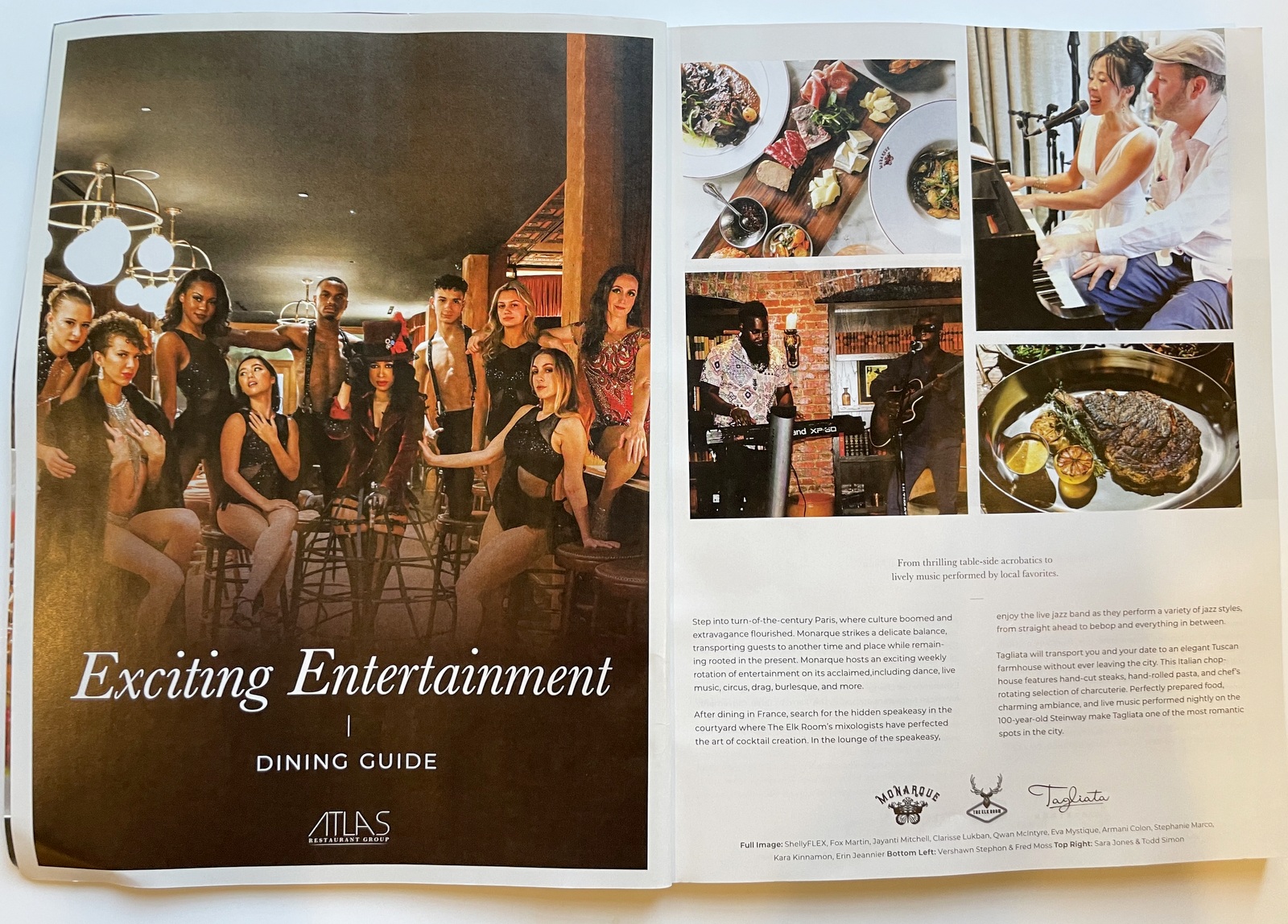 Start of a six-page advertising package for the Atlas Restaurant Group in the current issue of Baltimore Magazine.

The magazine has to requests for comment from The Brew. [We missed the response they sent earlier in the day. It’s included in full below.]

Chase Cook, spokesman for the state Department of Health, confirmed that the agency is “aware of the incident” and “sent out a survey to attendees to gather more information.”

Asked specifically whether the state received the list of restaurants from Baltimore Magazine and why the Atlas restaurants were missing, Cook did not say.

“We are working to get a complete list of food from Baltimore Magazine,” Cook said in an emailed statement.

The Brew has reviewed the online link to the survey that, as of this evening, still had not been updated to include the Atlas establishments.

“We are working to get a complete list of food from Baltimore Magazine”  – Chase Cook, Maryland Health Department.

Posting on a private Facebook page for party attendees, one person said she contacted the magazine to complain about the omission of the Atlas establishments.

She included a reply she received from the magazine saying, “We provided all vendor contact information to the Department of Health.”  This led her to conclude “they are basically blaming the department.”

Also appearing on the Facebook page was this statement from Michael Teitelbaum, president of Baltimore magazine. 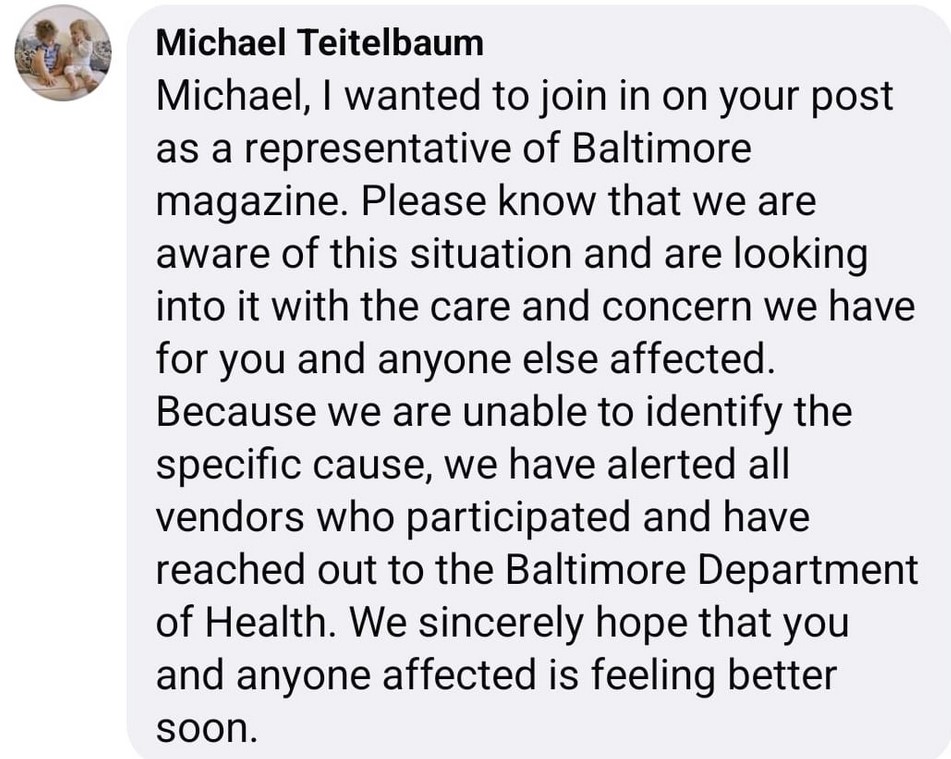 His statement wasn’t received well by most on the page, who were comparing notes today about bloody stool, inflamed intestines, emergency room visits, antibiotic treatments and other features of their unfortunate experience.

Layana and others want the magazine, at a minimum, to refund their $100 tickets and possibly to compensate them for the cost of medical care and related expenses.

Their queries about compensation and refunds, they said, have only elicited a general statement like Teitelbaum’s.

“They have not been sensitive,” she said. “They are not taking responsibility here or showing empathy. Or even simply apologizing.”

It came to our attention that some people who attended this year’s party experienced an illness in the days after. Because we are unable to definitively identify the cause, we proactively contacted the Department of Health. We provided all vendor contact information to the Department of Health, and they are currently investigating the situation by surveying all event attendees.

Our priority now is to work with the Department of Health, and at the time the investigation is complete, we will be reaching out to those affected directly.

We sincerely hope that anyone who has become ill begins feeling better soon. Any questions about the specifics of the survey, status, number of those sick, cause, etc. would best be answered by The Department of Health.