The witnesses came to City Hall with a strong message about a stinky problem – basement sewage overflows.

The two programs created to help people clean up after health-harming upsurges of fecal wastewater are inadequate and poorly publicized, advocates and residents said at a City Council hearing yesterday.

“I’ve been in basements where the stench of human waste was so strong I had to walk outside, even though I was wearing a medical grade mask,” said Taylor Smith-Hams, advocacy and outreach manager at Blue Water Baltimore.

“No one should be gaslighted by city officials who go out of their way to blame the residents for sewage backups,” Smith-Hams continued, describing people she’s seen cleaning overflowing wastewater with shop vacs because they couldn’t get the city to respond.

Meanwhile, the Department of Public Works came to the hearing to oppose expanding eligibility criteria for the Expedited Reimbursement Program (ERP) and Sewage Onsite Support (SOS) program, which can only be used for backups that occur in wet weather.

Rather than being improved and enlarged, DPW’s position was that the ERP should be phased out.

Under this program, applicants can seek up to a $5,000 reimbursement for cleanups after backups. (Advocates want that cap removed and eligibility requirements loosened.)

Under the SOS program, city workers respond directly to do a clean-up for qualifying applicants.

The advocates came to the Council hearing armed with DPW’s own data to show that the programs are significantly underutilized.

Updated numbers, provided during the hearing, only bolstered their argument. 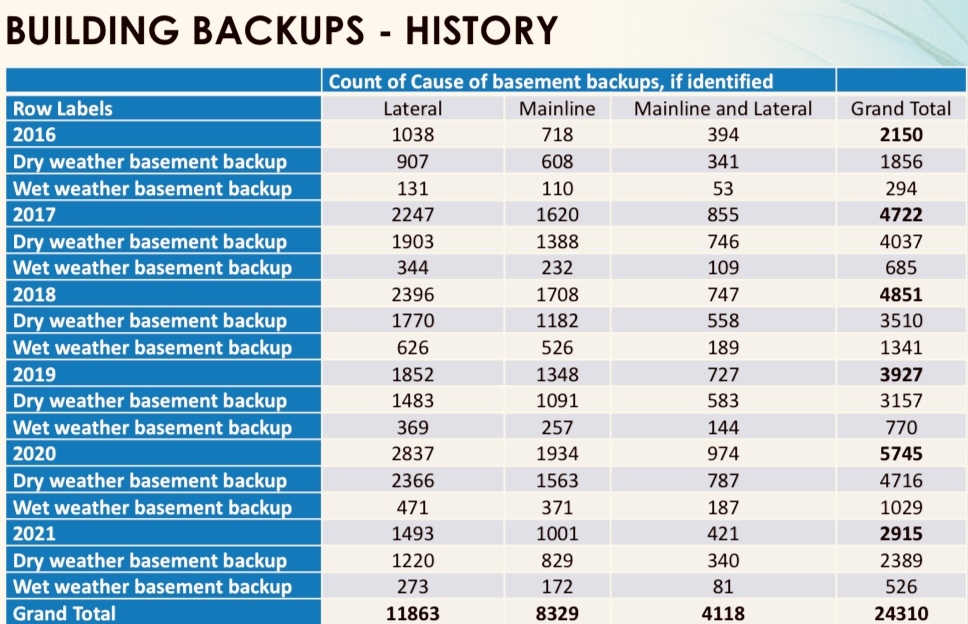 There were 24,310 basement sewage backups between 2016 and 2021, according to DPW. (Presentation to the Health, Environment and Technology Committee.)

No Approvals in FY23

The data appeared to raise no concern to Mohammed Rahman, chief technical officer in the Bureau of Water and Wastewater, who represented DPW.

“We were capturing a lot more applications in the other program,” he said, referring to the SOS program.

But data that Rahman provided to the committee showed the SOS program is also barely used.

Few Baltimore residents apply for the ERP and SOS clean-up programs and even fewer get approved – only 19 over the past three years.

Meanwhile, Rahman’s presentation also showed that there are thousands of basement sewage back-ups every year in Baltimore.

“It’s unclear how much of an undercount that is since it’s based on 311 calls,” noted Clean Water Action’s Maryland program coordinator, Jennifer Kunze, speaking with The Brew after the hearing.

Called by 8th District Councilman Kristerfer Burnett, the hearing follows an earlier request by the legislative body for DPW to study the feasibility of expanding and improving the sewage programs.

Noting that basement back-ups place a heavy burden on Baltimore’s low-income residents, advocates called at the time for both programs to be continued.

In a joint report, Blue Water Baltimore and Clean Water Action concluded that the two programs should be expanded to cover all back-ups originating from city-owned infrastructure, not just those as a result of significant rainfall.

So-called “dry weather backups,” which can occur as a result of a pipe blockage or pipe failure, are now ineligible for the programs.

“The vast majority of these backups are in dry weather, instantly eliminating any chance of reimbursement or direct cleanup and, by extension, any hope that these programs can be effective,” said Blue Water Baltimore’s Matthew Price.

The advocates also recommend that DPW:

• Remove the $5,000 cap on the ERP program and include property damage in addition to cleanup costs.

• Require SOS contractors to get permission before throwing away property.

• Proactively use DPW’s Hydraulic Model to identify residents who may have experienced a sewage backup during a rain event, even if they don’t report one to 311.

Those changes are unworkable for a number of reasons, including cost, DPW argues.

The agency estimates it would cost $4.3 million to expand the ERP program to cover all sewage backups, wet or dry, caused or contributed by conditions in the public sewer system.

The estimates assume every single qualifying household used the programs.

Because each individual qualifying household would only use the SOS or the ERP, not both, the advocates estimate the total maximum cost of expanding both programs would be roughly $5.9 million. 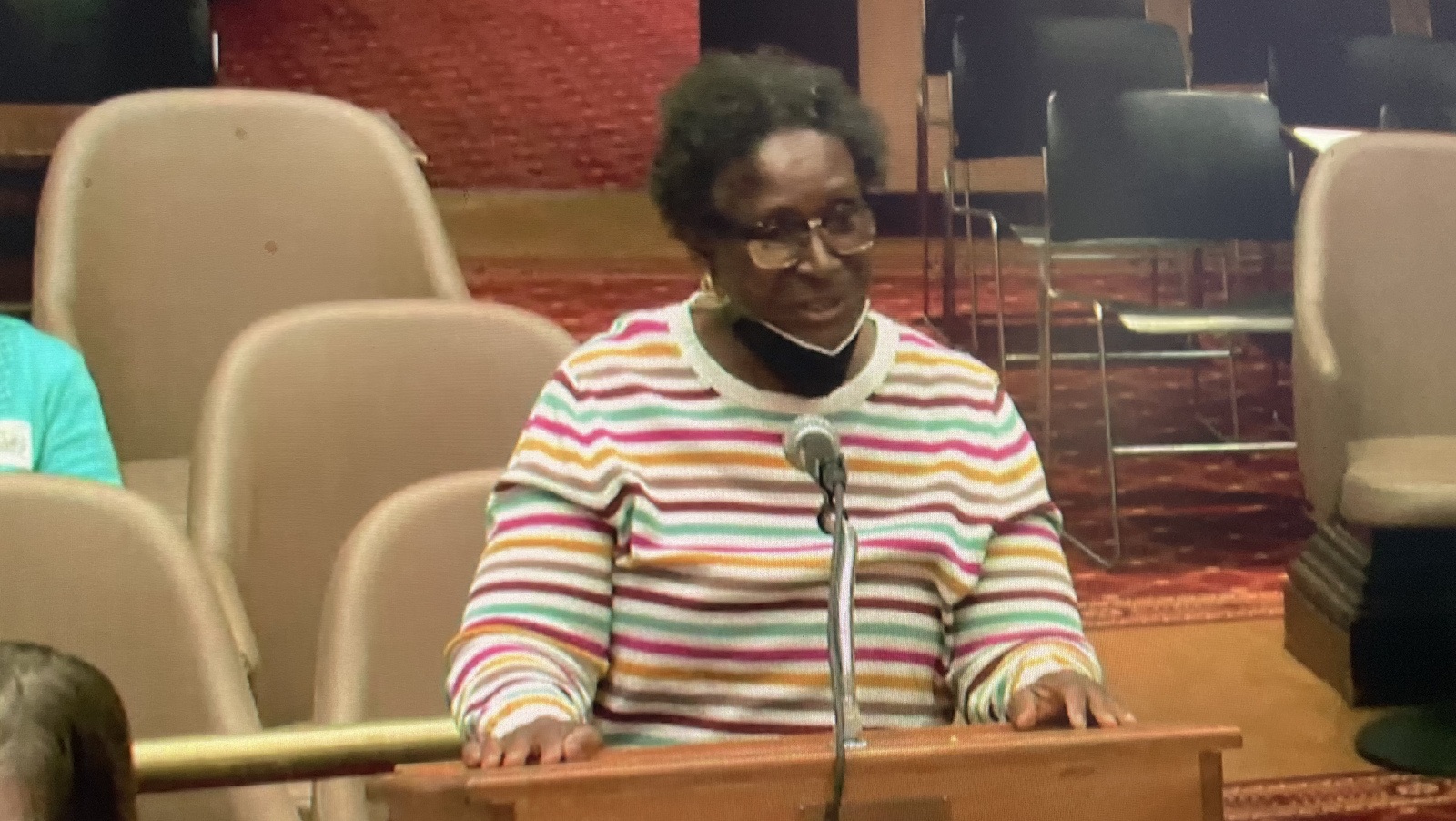 Deborah Downs testifies that residents of her Belair-Edison neighborhood need to be told about sewage back-up programs that could help them. (CharmTV)

A Threat of Higher Rates

Other costs could be similarly onerous, the DPW warns, including extra time for city lawyers and claims officials to evaluate the larger pool of applications to see if they qualify.

And with expanded criteria, there could be “a shortage of contractors,” the agency also suggested.

What the advocates propose “transforms the current programs into social programs whereby assistance is provided without regard to any legal requirement,” the DPW report says, raising the specter of increased water rates to cover the extra expense, adding:

“The city may be obligated to pay for any sudden, unforeseeable and catastrophic events such as a major failure in a pumping station or sinkhole collapse or major storms that leads to sewer backups.”

Their statement triggered a sharp response from advocates.

“These types of catastrophic public infrastructure failures are, in fact, the exact situations where the city should provide as much support to residents as possible, not skirt responsibility,” the BWB/CWA report shot back.

They noted that while DPW agreed under a federal consent decree to allocate $2 million per year for the ERP program, so far only about $21,000 has been paid out.

“Can you explain why there’s such a stark difference? Where is the money going?” Burnett asked.

Rahman said the agency is simply required to “maintain that $2 million in its budget.”

“Can you say why we’re not using more of that money for obviously a very critical need?” – Councilwoman Phylicia Porter.

“Can you say why we’re not using more of that money for . . . obviously a very critical need?” Councilwoman Phylicia Porter pressed.

Rahman said DPW was obligated only to expend the funds for applications that meet its criteria.

Why couldn’t the money be used to publicize programs that most residents appear to be unaware of, the lawmakers asked?

Perhaps if the city’s liability is a concern, agreements could be crafted to allow some reimbursement to move forward, several said, describing constituents left waiting, sometimes for years, for help with high clean-up bills.

“I want to think about proactively how we can use those funds,” Councilman James Torrence said, “because $21,000 out of $2 million, it looks like we’re actually just stiffing our residents.”

Rahman was asked if DPW had applied to receive any of the more than $640 million in federal American Rescue Plan Act (ARPA) funds that the office created by Mayor Brandon Scott has been doling out?

Yes, DPW had applied, he said, but they have not received any response to their application.

And what about no-cost changes, like upgrading the scripted response that 311 operators give when people call to report sewage in the basement?

That might raise unrealistic hopes of reimbursement, Rahman explained.

“There might be a possibility that you are giving out wrong information to the residents and misguiding them in a sense. Like if there is any groundwater infiltration seeping into the basement, and then you are saying you are eligible for reimbursement,” he said.

The BWB/CWA report also questioned the city’s argument that it lacks resources, noting that DPW has allocated an additional $2.5 million annually for the SOS program, bringing the total budget to $4.5 million.

Given that DPW’s estimated maximum cost to expand both clean-up programs would be about $5.9 million, that leaves a shortfall of only $1.4 million.

“For reference,” the BWB/CWA report noted, “that is about 0.25% of the police department’s FY23 budget.”