When room capacity limits were breached, the fire inspector didn’t warn police to turn away a crowd that had become loud and unruly at a City Council meeting, the Baltimore inspector general has found.

A public synopsis of her findings, released today, does not identify who gave the order that permitted serious overcrowding in the building and exposed Council members, meeting attendees and the police to fire and security risks.

Some members of the crowd descended to the offices of Mayor Brandon Scott. There the group’s leader, Bruce Marks, banged on the mayor’s locked door, demanding that he address them. (A Scott spokesman later said the mayor was not present in the building.)

The banging became so aggressive that police had “serious concerns” about public safety, the IG report says.

But no action was taken to eject Marks or other members of the crowd, who  returned to City Council chambers to dress down Council members.

The report (found here) fills in some critical details surrounding the Committee of the Whole meeting that was called by City Council President Nick Mosby to try to push forward his controversial Urban Homesteading dollar-house bill.

•  City Hall’s front entrance identification system, which creates a paper ID for visitors to wear in the building, “jammed and stopped working very early in the evening.” Hundreds of people were allowed to pass into the building with only visual ID checks as they walked through the metal detector.

• A fire inspector stationed at the entrance failed to conduct a headcount to enforce the fire code, as required under department protocols, later telling the IG that head counting was the responsibility of the police.

• The posted capacity for the Council chambers is 80 people. When that area became seriously overcrowded, a fire inspector was told by the fire marshal to “shut down the event and prevent anybody else from entering,” but the inspector failed to relay that order to BPD officers who were waving the crowd through at the front entrance.

• When the commanding police officer asked the two fire inspectors about their inattention to crowd size, each told him they were instructed not to complete headcounts at the event “and to allow everyone to enter.” Questioned later by the OIG, both inspectors denied having said so.

• The absence of controls to identify visitors and to restrict their movement “allowed security issues to arise as the crowd wandered around the building unrestricted.” 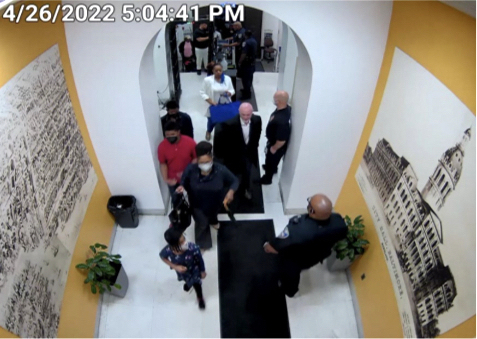 People pass through City Hall security after the ID system jams. In the archway is the fire inspector who said his job was not to check the crowd size. (OIG Report)

The crowd of over 500 people, according to video surveillance, was organized by the Neighborhood Assistance Corporation of America (NACA) at the request of Mosby.

The Council president was trying to win passage of his dollar house bill, and NACA, a Boston-based nonprofit that provides mortgages for low-income families, agreed to help.

Five days before the Council meeting, CEO Bruce Marks sent out emails telling NACA members their attendance at the meeting “will count toward your participation requirement.”

What’s more, passage of Mosby’s bill, Marks said, will let participants “purchase a city property for $1 and renovate it with financing through NACA’s Best in America mortgage,” The Brew reported at the time.

THE BREW’S COVERAGE OF APRIL 26:

• A January 6 moment at City Hall as Mosby recruits a housing firebrand from Boston (April 27, 2022)

The crowd that showed up – many from the Maryland suburbs, Virginia and D.C. – overwhelmed the small contingent of police and private security guards.

The commanding police lieutenant told the IG that if the crowd had turned violent, “it could have overpowered BPD or the Abacus security officers.”

“Further,” the report says, “the BPD lieutenant believed if there had been a fire or other need for an evacuation of City Hall, the crowd’s volume could potentially endanger individuals. Other BPD officers and City Hall staff echoed these same sentiments to the OIG.” 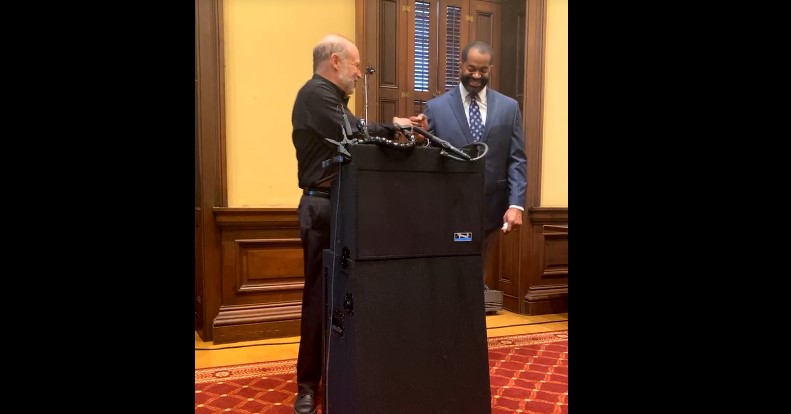 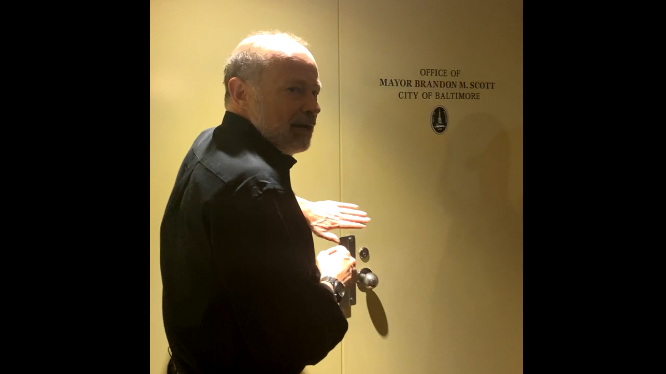 The OIG said much of the city’s inadequate response to the boisterous crowd was due to the short notice given by Mosby of the meeting.

On the evening on April 25, Mosby took the unusual step of assigning the Urban Homesteading bill to the entire Council, rather than a select committee, a move that required all Council members to meet the next evening to hear public testimony on the bill.

Mayor Scott’s deputy chief of staff, Leslie Carter, said she was notified of the meeting on April 25, but not the expected crowd size.

It was not until 1 p.m. that the Emergency Operation Coordinator got word of the anticipated number of visitors.

BPD officers were not told until the morning of April 26 (by Marks himself) to expect 300-400 people, by far the largest gathering at a Council meeting in years.

And it was not until 1 p.m. on the 26th that the Emergency Operation Coordinator got word from the mayor’s office of the anticipated number of visitors, the IG said.

At this point, the coordinator assigned several Abacus Corporation security guards and two fire inspectors to supplement an unspecified number of police (typically, two officers are stationed at the front entrance). 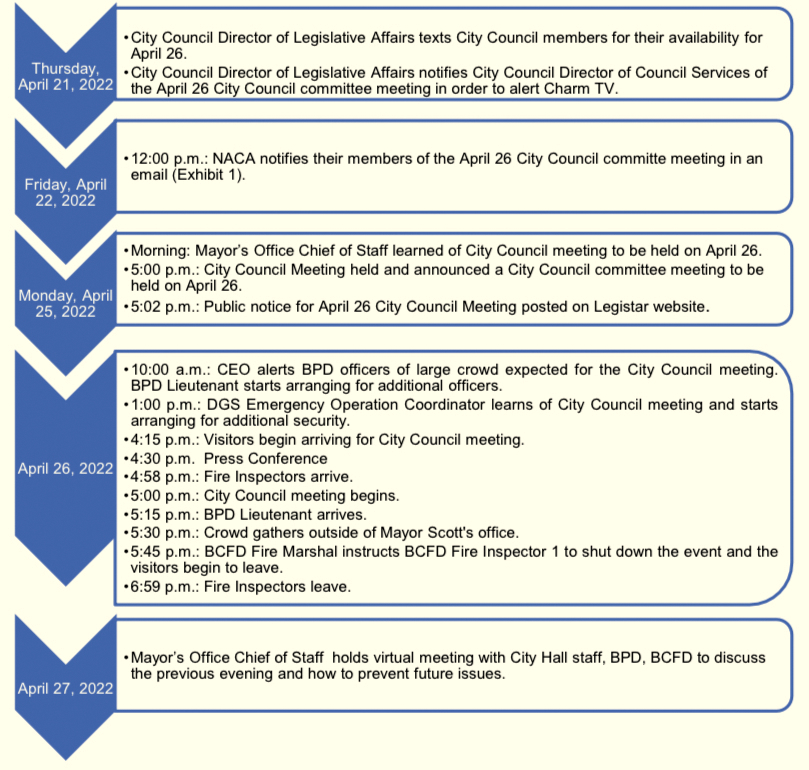 Timeline of events leading to the April 26,2022 Committee of the Whole meeting. (OIG Report)

Members of the crowd began arriving at City Hall at 4:15 p.m. in anticipation of a 4:30 press conference staged in the Curran Room by Mosby, Marks and Council Vice Chair Sharon Green Middleton. The capacity of that room is 110, and the place was soon jammed.

Over the next hour, as the City Council heard vitriolic testimony by Marks, the IG counted some 538 people passing through the front entrance. With the ID machine not working, most were waved through the metal detector, video footage shows.

The same footage shows the fire inspector who did not conduct a headcount stationed at the entrance.

A fire marshal later told the IG that fire inspectors are responsible for “maintaining a headcount to enforce fire codes, not the BPD,” and typically use a smartphone app to keep count.

A mailroom manager was worried that the crowd had potential access to sensitive areas of City Hall.

By 5:30 p.m., a crowd had formed outside the mayor’s office. The commanding lieutenant said he heard shouting and thumping on the second floor, but by the time he arrived the crowd had returned to the Council chambers.

A mailroom and supply manager told the lieutenant he was worried about the crowd’s behavior, saying it had potential access to sensitive areas of City Hall.

The unnamed employee then took it upon himself to “secure the fire doors and other entry points on unoccupied floors to prevent the public from freely roaming the building,” the IG report noted.

Nick Mosby responded to today’s report by praising the inspector general “for your thorough and diligent efforts to detail the events leading up to that meeting, during that meeting and following that meeting.”

Dismissing any concerns about his own conduct before and during the meeting, Mosby wrote, “My office is committed to conducting the public business for Baltimore City in the most welcoming, transparent and safe environment possible,” adding that his staff began working with the mayor’s office and others “in the days following the April 26, 2022 Committee of the Whole hearing to address some of the issues this OIG report has identified.”

Since then, his office has implemented “weekly communication” with the mayor’s office and the Department of General Services regarding future Council meetings.

“My office is committed to conducting the public business for Baltimore City in the most welcoming, transparent and safe environment possible”  – Nick Mosby.

In response to the IG’s recommendation for adequate notice and Standard Operating Procedures for Council events, Mosby said, “We would welcome the opportunity to collaborate with the aforementioned executive agencies to develop a SOP to manage events when there are large crowds expected at City Hall.”

As to the mayor’s reaction to April 26, Leslie Carter, the deputy chief of staff, said armed security has been added to the building and the ID system updated “to avoid future jamming.”

All City Hall guests, she noted, should now be aware that “any disruptive behavior will result in them being removed from the building.”