For more than five years, Cheatham and Murdock have been working on the project, arguing that such an amenity is overdue in a majority Black city whose only public skateparks are located predominantly in white neighborhoods.

After Hayes abruptly terminated funding for the project – which had snagged city and state funds and been greenlighted by the Recreation and Parks Department – the senator was asked, why?

“This is something Doc has created in his head that the community wants [this] as a matter of equity,” Hayes told Baltimore magazine.

Hayes asserted that no one who lives around Easterwood Park, located at Baker and Bentalou streets on the city’s westside, supports building the skatepark.

And he went on to say, “If skatepark backers were given 24 hours, they couldn’t find 10 supporters who live within two blocks of the park.”

“We took offense to that,” Cheatham said as he and Murdock announced that they had met – and exceeded – Hayes’ challenge.

In just two hours on October 8, a Saturday, they got 243 signatures from the greater Easterwood neighborhood, including more than 70 from within a two block radius from the proposed location for the skatepark.

“That shows how interested people are,” Cheatham told reporters on the steps outside Matthew A. Henson Elementary School on Wednesday.

Just then, Hayes came walking up Baker Street to the school, where a meeting of the Matthew A. Henson Neighborhood Association was about to take place.

Murdock reached out to shake Hayes’ hand, but he walked past her without reciprocating, leaving her hand dangling in the air.

“We’d like to hand you a copy of this document,” Cheatham called out to Hayes.

But the 40th District senator kept walking and entered the school building. 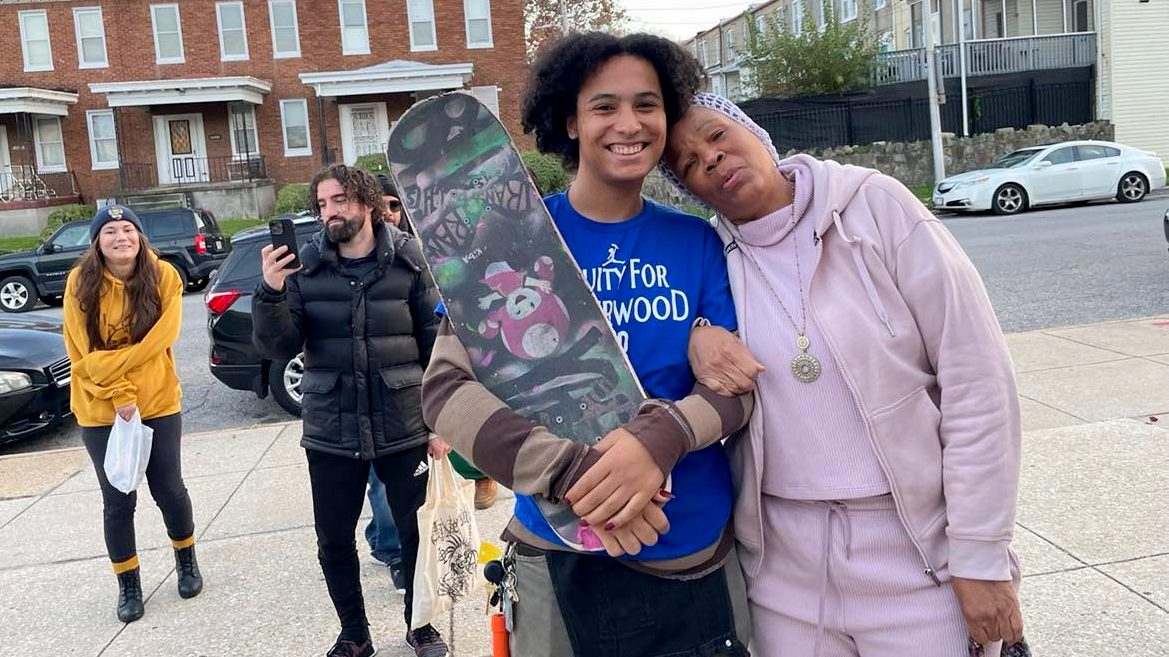 The frosty encounter captured the tone of the impasse that is stalling a project that, until July, had been on track to be completed by the end of this year.

The city allocated $300,000 in the fiscal 2020 budget to explore the potential for building a skateboard facility at Easterwood Park, among other tasks.

An upbeat story about the project appeared in the Washington Post in 2021. It quoted Reginald Moore, director of Baltimore City Recreation and Parks (BCRP), calling the skatepark “a fun amenity for everyone to enjoy” and treating the plan as a done deal.

Then, in July 2022, Cheatham and Murdock were called to a meeting with BCRP officials who informed them that the city no longer planned to build the skatepark and would instead use the money only for improvements to existing features at the park.

“We were completely blindsided,” Murdock told The Brew.

She ticked off the indicators that the project had been moving forward, including years of back and forth with the city to plan the skatepark and identify the best site for it.

Hayes himself, in 2019, had written a letter in support of a grant application for the project.

Asked about the signatures gathered by Cheatham that vastly exceeded his challenge, Hayes had only this response:

“The first phase and current available funding for Easterwood Park will be prioritized to address the immediate hazardous safety concerns that exist in the park,” he said in a brief text to The Brew.

Asked why Rec & Parks was now dropping its original plan to move forward with both a skatepark and general park upgrades, Hayes had this reply:

“The change will hopefully not require the removal of approximately a half dozen trees and relocation of one of two basketball courts,” going on to indicate skatepark boosters must now seek new funding.

“Addressing immediate hazardous safety concerns in the first phase allows the opportunity to contemplate a skateboard park in subsequent funding opportunities,” he wrote.

Murdock says she and Cheatham will deliver the petition signatures to Mayor Brandon Scott (as well as to Hayes) in hopes that the mayor will save the project’s funding and allow Rec & Parks to carry out a project it once embraced.

“We need to get this plan back on track,” she said. 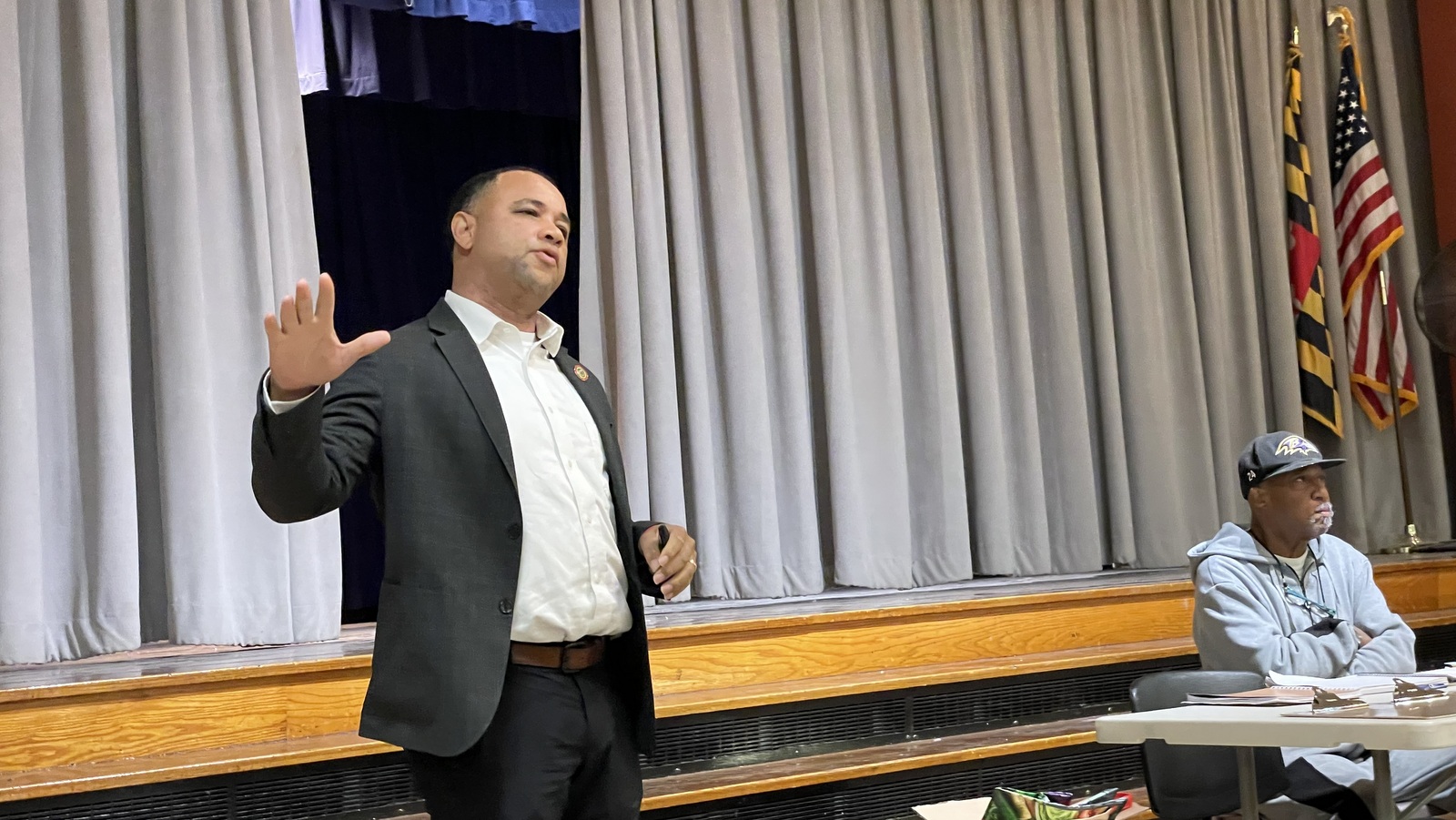 At the Wednesday press conference, reporters tried to get to the bottom of the controversy, asking who in the community opposes the skatepark?

Cheatham pointed to a man standing on the sidewalk listening.

He was  Zanes E. Cypress Jr., president of the Omega Baltimore Foundation, which is the city’s designated manager of the Easterwood Recreation Center located at the northeast corner of the park.

The nonprofit, created by the local chapter of Omega Psi Phi fraternity, was given rights to manage the rec center during the Stephanie Rawlings-Blake administration.

“The park has some very critical capital improvements that are needed,” Cypress said on Wednesday, citing crumbling walkways, a playground in disrepair and fencing damaged by fallen trees.

Murdock and Cheatham say their proposal was designed to upgrade the park while also installing the skatepark.

For example, the skatepark would claim one of the park’s two basketball courts, but the court would be relocated elsewhere in the park’s footprint. 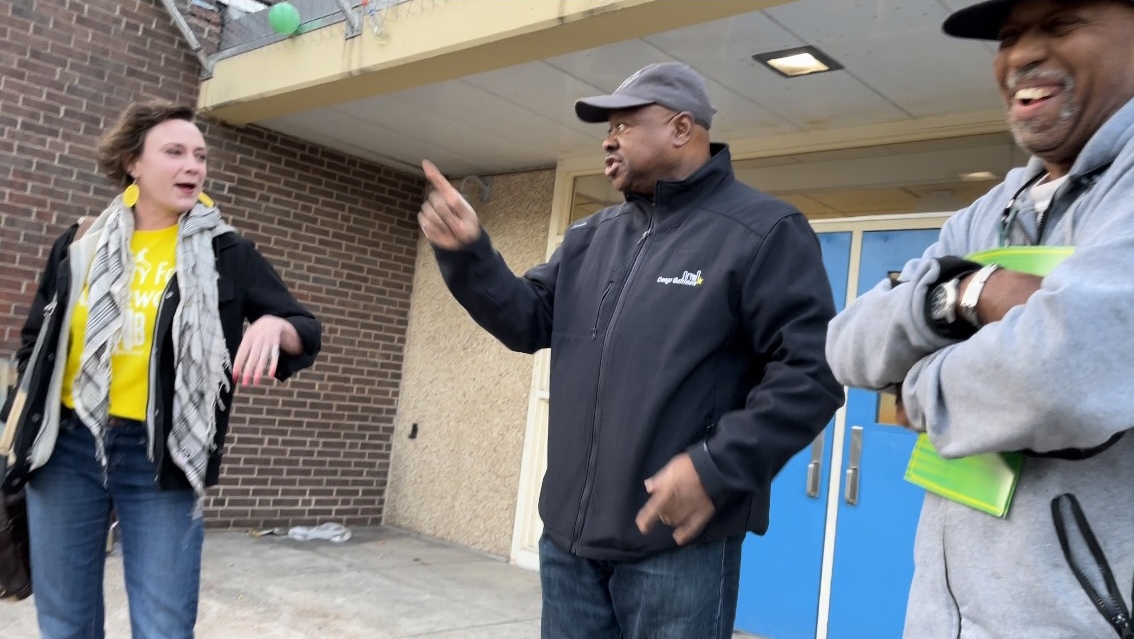 Zanes Cypress (center) points to Stephanie Murdock as Doc Cheatham listens outside of the Matthew A. Henson Elementary School on Wednesday. (Fern Shen)

Despite having been quoted at length opposing the skatepark, Cypress disavowed involvement in Hayes’ decision to pull funding for the skatepark portion of the plan.

“I’m not in control of funding,” he said. “It’s a safety issue. I support the fixing of the park. Any other improvements to me are secondary.”

“It’s a safety issue. I support the fixing of the park. Any other improvements to me are secondary”  – Zanes Cypress, president of the Omega Baltimore Foundation.

Murdock said there are plenty of resources to go around, noting that Mayor Scott had just announced that Omega will receive $260,000 from the city’s share of federal Covid-19 relief ARPA money.

As the top legislator representing this part of Baltimore, Hayes has a major say in the flow of the state funds that city agencies, like Rec & Parks, seek for projects.

Last week, Hayes received kudos for steering $17 million to Rec & Parks for its long-range plan to overhaul Druid Hill Park in the wake of a reservoir tank project wrapping up there.

Money flows in the other directions as well.

The Brew traced $1,178 in campaign contributions to Citizens for Antonio Hayes from Cypress, who was recently identified as the vice chair of the Druid Hill Park Partnership, the nonprofit formed to support development around Druid Hill Park.

Cypress, whose online resume says he built and staffed Hayes’ successful Senate campaign in 2018, has also been a modest contributor to other local politicians, including City Council President Nick Mosby ($375) and Mayor Scott ($345).

Some view the skatepark issue as basically a clash between an often outspoken political maverick (Cheatham) and a Democratic Party stalwart (Hayes).

Cheatham was among the candidates who in 2014 ran unsuccessfully against Hayes for a 40th District House of Delegates seat. 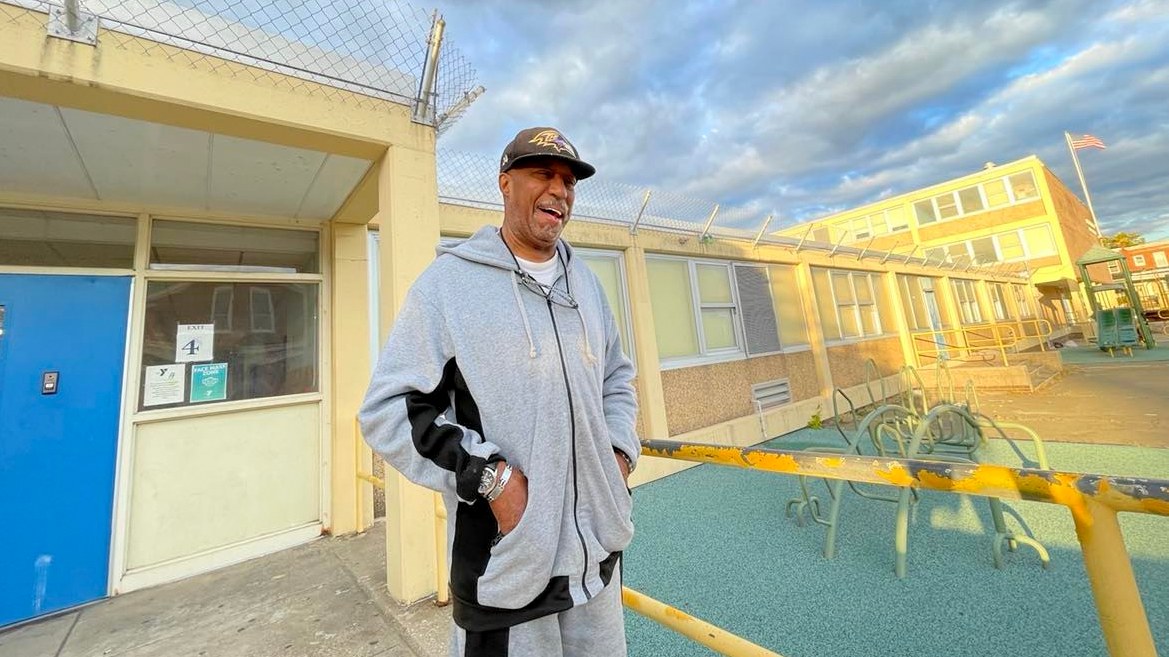 The onetime president of the Baltimore branch of the NAACP and current president of the Matthew A. Henson Neighborhood Association, Cheatham has taken positions outside of the political mainstream.

He is, for instance, a vocal supporter of Question K, the term-limit bill opposed by University of Maryland law professor Larry Gibson as well as Hayes and many other elected officials.

Cheatham did endorse the man who became this year’s Democratic nominee for Maryland governor, Wes Moore, but he also stood with Thiru Vignarajah in his failed run for Baltimore mayor in 2020.

In 2019, when a man’s body was found hanging at Easterwood Park – left visible to students from Carver Vocational-Technical High School across the street – Cheatham blasted police, saying they “lie rather than admit they dropped the ball.”

While he respects Hayes’ office, Cheatham considers the lawmaker an absentee representative. “No one has seen him around here in years,” he says.

A community ally put it this way: “Doc is very passionate about his community. He can ruffle feathers.”

“A skatepark is another outlet for the kids. Something to do that’s positive”  – Doc Cheatham.

At the Wednesday event, the 72-year-old delivered an in-person version of the urgent, all-caps emails he regularly blasts out to public officials highlighting the problems he believes are being ignored in his community – high crime, lack of services for seniors, the absence of a supermarket abd an early voting facility.

“For the last seven years, we’ve averaged 50 homicides here every year in the Western District. It’s very dense here, we have eight liquor stores in this area right here alone. We’ve experienced a lot,” he said.

“A skatepark is another outlet for the kids. Something to do that’s positive,” he said. “There is no Black skatepark anywhere in the state of Maryland.”

“I’m absolutely for it”

Listening to Cheatham speak, Regina Jackson agreed. Having lived in the neighborhood for 37 years, she said that she knows its needs.

“The murder rate is skyrocketing, the rec centers are all shut down, the children don’t have many after-school activities, and they may find other things negative things to get involved in,” Jackson said.

To those who argue there’s no interest in skateboarding in her community or that basketball is more popular, she has a tart response: “That’s something people assume about Black culture. That’s a stereotypical idea.”

“Skateboarding is something different they should be exposed to.  I’ve seen it. It’s very creative, a way for these kids to release their energy,” Jackson told The Brew.

“I’m absolutely for it.”