If well-worn patterns repeat themselves, most of the 15 questions Baltimore voters will see on the 2022 ballot in the November 8 General Election will be approved.

Many are pretty routine.

There are, for example, bond issues (Questions A. B, C and D) to authorize the city to borrow millions for new school construction and for building upgrades, affordable housing, blight elimination, libraries, cultural programs, etc.

There are constitutional amendments as well, including Question 1, which would rename Maryland’s two appellate courts to make clear which outranks the other. (Changing “The Court of Appeals” to “The Supreme Court of Maryland” should do the trick.)

But mixed in are a number of interesting referendum questions for city voters.

They include sleepers like Question E, prohibiting the sale of the city’s underground conduit system to a private entity, and high-profile proposals like Question K, which would place term limits on local officeholders. 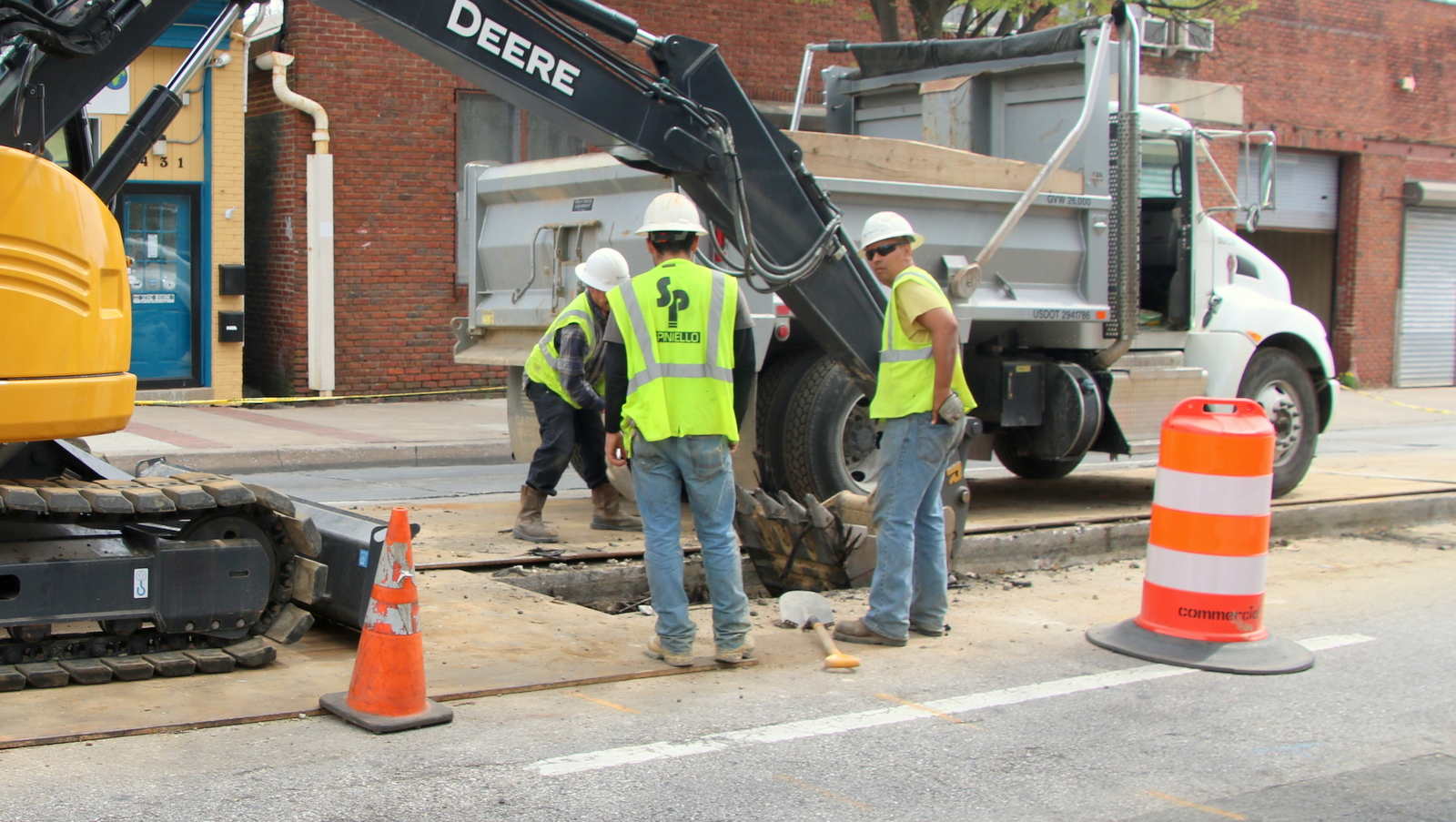 Spiniello workers cut into Greenmount Avenue in 2019 as part of an overhaul of Baltimore’s underground conduits. (Fern Shen)

Former Mayor Jack Young recently resurfaced to warn against allowing the city’s 700 miles of underground pipes – used for phone, electric and fiber-optic cables – to fall into private hands. (The Baltimore Gas & Electric Co. tried unsuccessfully to buy the system in 2015.)

At a Board of Estimates meeting, Young spoke out against a telecom consulting contract, proposed by Mayor Brandon Scott’s administration, that appeared to pave the way for such a sale.

Voter approval of Question E would ban selling off the conduits and render the issue moot.

Battling it out in the spotlight, replete with lawn signs, opeds and social media messaging, is Question K, which proposes term limits for city elected officials.

Smith, who lives in Baltimore County, has spent $525,000 of his own money to promote Question K, according to campaign finance reports.

Opponents have highlighted that massive personal spending by the man behind Sinclair’s conservative flagship station WBFF-TV (Fox 45), whose coverage of the city has been aggressive and relentlessly negative.

An analysis by Maryland Matters of the station’s coverage of Question K not only found it one-sided, but often failing to disclose that Smith is leading the term-limits campaign.

The article quoted a journalism professor calling the coverage “disturbing,” saying it’s not considered ethical for journalists to cover “the pet editorial project” of management without providing the full story.

What Question K Does

This ballot measure would amend the city charter to limit the mayor, council members, council president and comptroller to two terms of four years each.

The cap would not be imposed until 2024. And the count of terms would start that year.

Officials could serve in different offices over the course of their careers, but they would be constrained by a two-term limit for each office.

K Proponents: Break up the logjam of politicians keeping their seats through incumbency.

Standing in front of City Hall last month, supporters of the measure said term limits would bring in fresh leadership by breaking up the logjam of city officials holding tight to their seats through the power of incumbency.

“There are people sitting on the sidelines, waiting for the opportunity to be engaged and be involved,” Rev. Al Hathaway said. “Term limits allow that to happen.”

Opponents, meanwhile, say citizens already have the power to unseat officials at the ballot box. They argue that it takes time to develop expertise and carry out ambitious government initiatives.

“Imposing structural term limits is paternalistic and insulting to the citizens, who should be free to retain officials they like and believe are doing important work,” Gibson said in an op-ed.

“The idea of permanently limiting whom voters can elect is a ploy designed to serve special interests, not voters,” said a statement released yesterday by the Baltimore City Democratic State Central Committee (BCDSCC).

“Prominent Black churches, city and state workers’ unions, the NAACP and elected officials” are expected to join the BCDSCC tomorrow (Thursday) for an anti-Question K event. 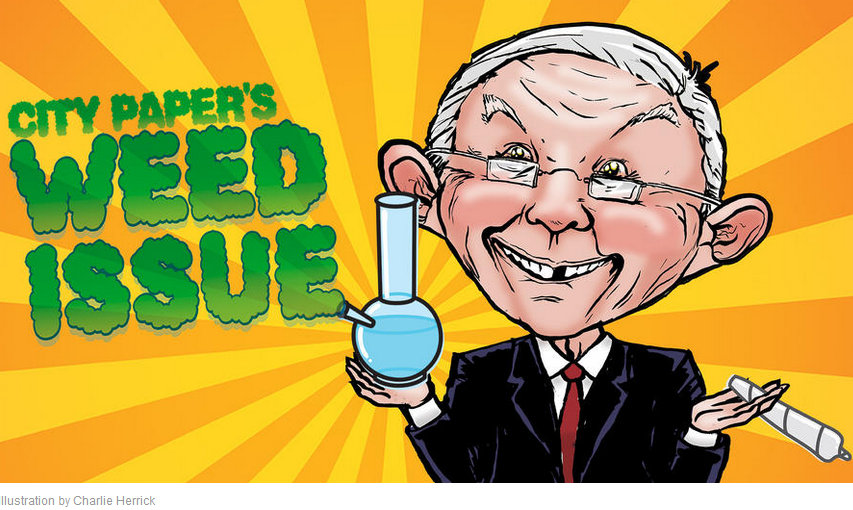 The late, lamented City Paper was known to devote a whole issue to marijuana.

Also on the Ballot

Question 2 would tighten the eligibility requirement for the office of state senator or delegate. Under this constitutional amendment, a person would be required to have both resided in and maintained a primary residence in the district the person has been chosen to represent for at least six months  preceding the date of the person’s election.

Question 3 would allow legislation to be enacted to limit the right to a jury trial in a civil proceeding, in which the amount in controversy is not more than $25,000. The limit is currently set at no more than $15,000 in the Maryland Constitution.

Question 4 would legalize the possession of cannabis in Maryland. If passed, those 21 years and over will be able to legally possess up to 1.5 ounces of cannabis and grow two marijuana plants out of public view beginning July 1, 2023. (The sale of marijuana remains a crime in Maryland under a law passed earlier this year.)

Question F would create a fund to be used to supplement rewards leading to the arrest and conviction of criminal suspects.

Question G allows for the creation of a fund to promote pre-apprenticeship programs and other workforce development programs in Baltimore’s public secondary schools and community colleges.

Question H changes the charter so that the Baltimore Police Department is no longer a state agency, a change whose effect would not be major. The mayor already has control over the budget and appoints the commissioner. This amendment would make officers city rather than state employees, allow the city to set the boundaries of police districts and to dictate policies for residency, take-home vehicles and other matters.

Question J takes Accounts Payable away from the Finance Department and moves it to the City Comptroller. Approval of the measure would expand the role of Comptroller Bill Henry over a city function that’s long been criticized for late payments.