To those wanting to restore the roadways beside the Roland Water Tower, the barriers blocking off one of those roads are a big orange plastic affront.

So hated are they in some quarters that someone – no one has claimed responsibility – recently pulled four of the barriers out of the roadway and chained and padlocked them to a pole.

Placed there by the Roland Park Community Foundation (RPCF) during the $1.5 million restoration of the tower, they are a hurtful sight to Quianna Cooke, who lives in Hoes Heights west of the tower at the intersection of University Parkway and Roland Avenue.

“What authority do they have to place them there to close that road?” said Cooke, a member of the Hoes Heights Action Committee (HHAC), composed of residents living in Hoes Heights and neighboring Heathbrook.

The group has pressed Baltimore officials to get rid of the barriers, left on the south side of the tower after plans envisioned by Roland Park leaders to put a new park at the base of the tower were paused.

On Wednesday night, several committee members made that case at a meeting with city officials, only to learn that the city is not only not removing the plastic barriers, but is replacing them with concrete ones.

The Department of General Services (DGS) has stepped into the controversy and plans tomorrow, Saturday, to swap out the plastic barriers for heavier barriers that the city will control.

“They’re doubling down!” declared Cooke who, like fellow committee members, says the roads provide symbolic and literal access to their tucked-away historic neighborhood in North Baltimore.

“I feel angry,” she continued. “It feels like, as an African American person, as a Black woman, we weren’t worthy of having our voices heard.”

Cooke said her group does not know who has been moving the barriers or who undertook the recent chaining action. But she understands the sentiment behind it.

“Concrete barriers?” she huffed. “So we can look like we’re in jail?” 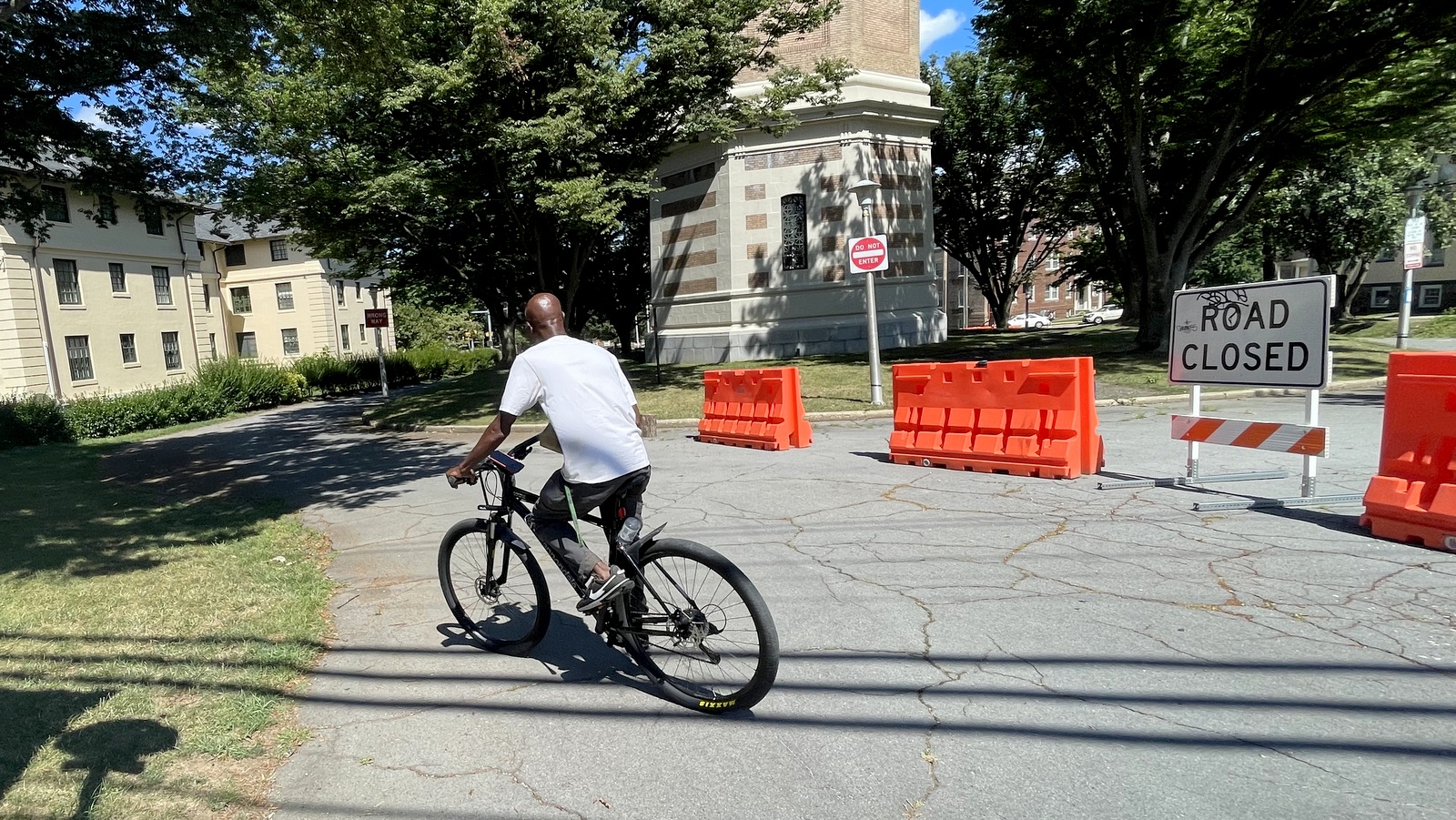 Coming from Evans Chapel Road earlier this year, a man bikes past the barriers closing off the south side Roland Water Tower road. (Fern Shen)

Jackson Gilman-Forlini, meanwhile, says the city has the legal authority to close off the road – and good reason to do so.

As the historic preservation officer at DGS, which controls the roads around the city-owned tower under a 2019 agreement, Gilman-Forlini spoke for the administration of Mayor Brandon Scott at the Wednesday online meeting.

“The plastic [barriers] were not attractive and were being moved around, which created confusion and a safety hazard. These heavier ones won’t be able to be moved,” Gilman-Forlini said, speaking afterwards to The Brew.

“A lot of children play there. This will be safer,” he continued. “These are going to be freshly painted concrete, much more attractive.”

He called leaving one road open a temporary approach, put in place while the ultimate decision is worked out.

“We know there are a lot of very strong opinions,” he continued. “Many neighborhoods would prefer both roads to be open, but there are also a lot who want them closed for pedestrian safety.” 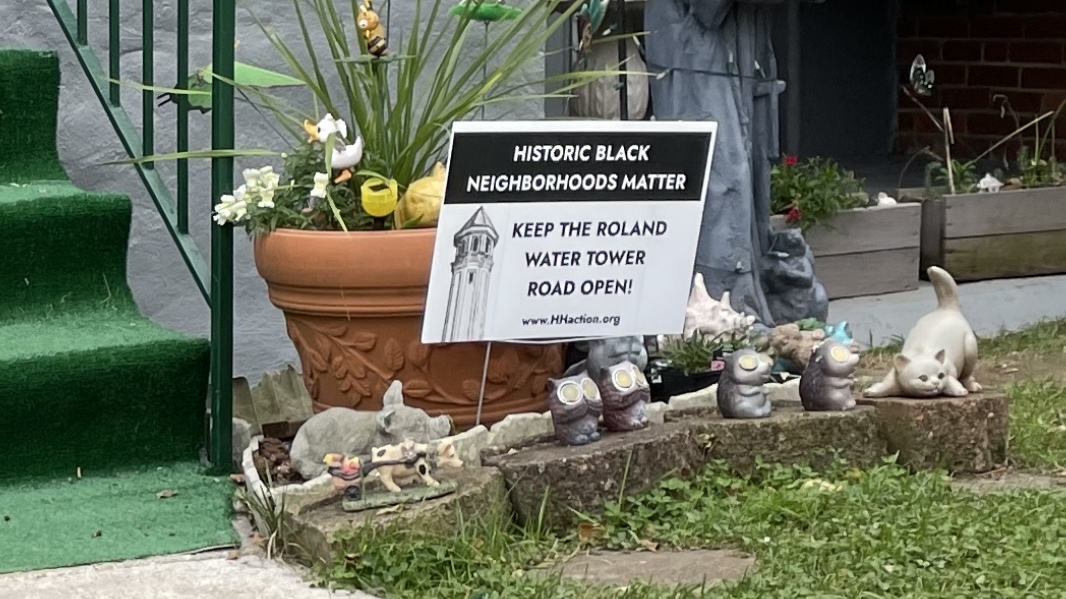 On 43rd Street in the Hoes Heights neighborhood, a sign opposing closure of the Roland Water Tower roads. (Fern Shen)

Opponents of the road closure maintain that few who live in the area that would be most affected favor the idea.

They point to the signatures they have collected and door-to-door survey they conducted showing 86% in Hoes Heights want both roads kept open.

Since the issue blew up in August, signs saying “Keep the Roland Water Tower Road Open” have been posted all over Hoes Heights and on many in lawns in Heathbrook as well.

The idea that closing one of the roads is needed to protect children makes Janis “Teri” Logan, livid.

“I was a little kid around that tower, my children grew up playing around the tower. Not once was there a safety issue,” the Hoes Heights resident said.

“My children grew up playing around the tower. Not once was there a safety issue”  – Teri Logan, Hoes Heights resident.

Another HHAC member, Betsey Heeney, called the safety argument “a manipulative ploy” to undermine the objections raised by legacy residents.

The roads circling the 117-year-old tower have been open to cars since at least the early 1970s, when buses stopped using the roads as a turnaround spot.

But the status of the nameless roads, as Jackson-Forlini pointed out, is unusual.

Although motorists have used them to travel to and from Evans Chapel Road and Roland Avenue, they are not under the authority of the Department Transportation and, technically, something more like city-maintained driveways.

Asked why she requested concrete barriers and is taking responsibility for continuing the road closure, 14th District Councilwoman Odette Ramos also called the decision a compromise.

“I get emails all the time from both sides, including people who want the roads closed and want a park,” she said, adding those people are “reluctant to speak out” amid the controversy.

The conflict flared up after a road-less design for the park was chosen by a steering committee created by RPCF.

That choice was the product of a robust community engagement process that “bent over backwards,” with meetings, fliers and e-blasts, to make sure all voices were heard, according to RPCF president Mary Page Michel, who chaired it.

Critics, however, said Hoes Heights’ objections were ignored and many residents had never heard about the largely online survey conducted during the pandemic.

Opinions from people outside the immediate area were given too much weight, they said, and the importance of access to a historic Black neighborhood given too little.

“The process was flawed. That’s why we’re doing it again”  – Councilwoman Odette Ramos.

Those objections, said Ramos, are why she and 7th District Councilman James Torrence are now undertaking a third survey process to gauge the community’s desires.

“The process leading to that ultimate design was flawed. That’s why we’re doing it again,” she said.

But even this effort has been fraught and delayed, with the HHAC questioning the membership of the group shaping the new survey and Roland Parkers pushing back.

“I must respond to what appears to be an effort to exclude Roland Park from conversations about the tower property,” Kirsten Johnson wrote as part of an emailed back-and-forth.

“Many residents of Roland Park live within a short walking distance from the tower and, like residents of the other adjoining neighborhoods, are already enjoying the quiet green space around the tower,” wrote Johnston, one of the Roland Park representatives on the now-disbanded steering committee.

Johnson also noted that RPCF holds the lease on the tower property.

“In view of the controversy, they have deferred decision-making to the city,” she said, “but they have not abandoned their interest in the outcome.” 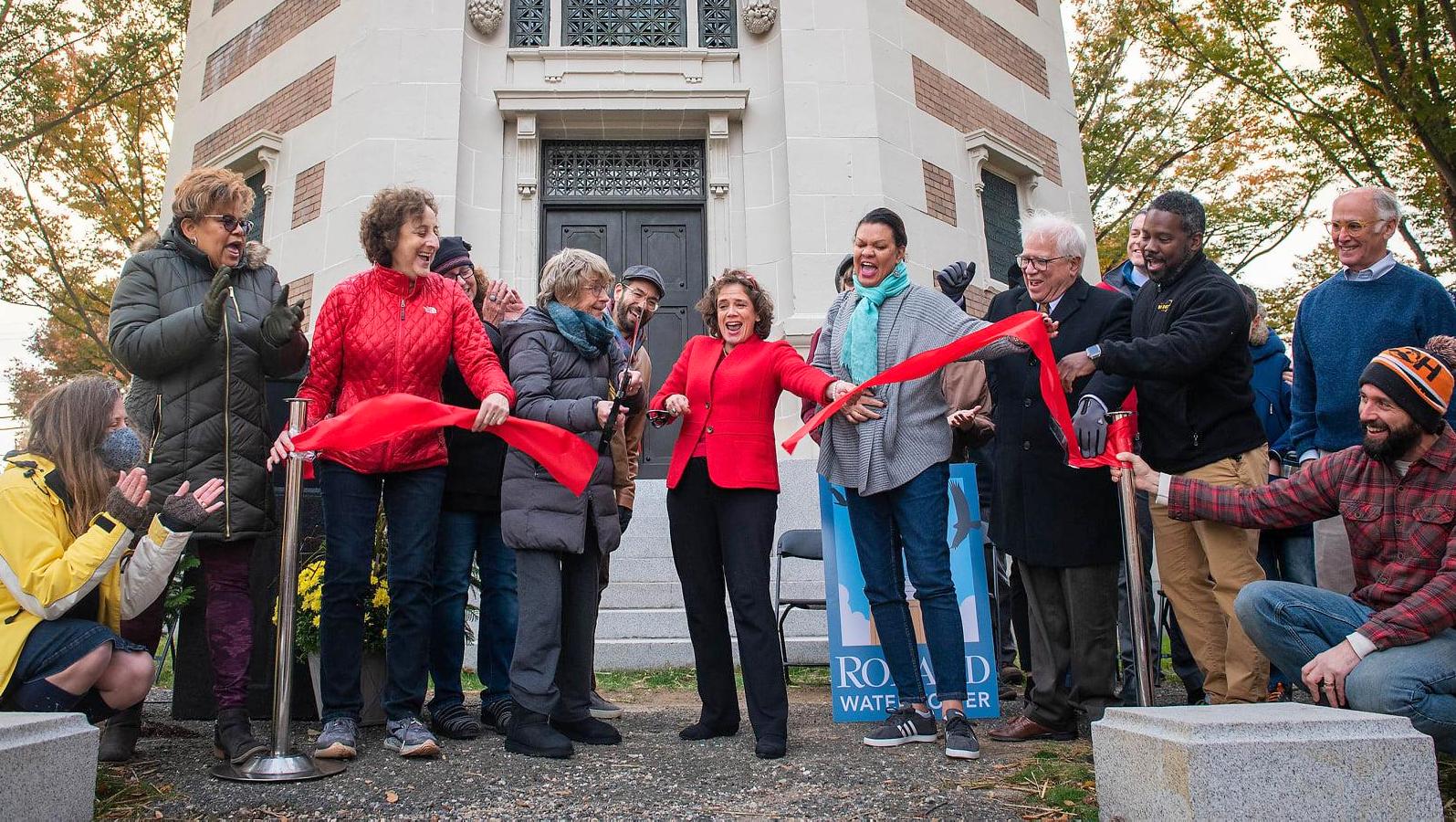 At a ceremony last November at the Roland Water Tower, Mary Pat Clarke cuts the ribbon, joined (to her left) by Councilwoman Odette Ramos. (Facebook)

Ramos said other issues complicate any decision about opening the roads, including the requirement that they be brought up to the pedestrian- and bike-friendly standards of the city’s Complete Streets Ordinance.

Area traffic issues are at play as well, she said, with a number of traffic-calming measures in the works that could ease access problems caused by closing the tower roads.

The part of 41st Street near the Giant shopping center, for example, is going to get street parking “so it becomes one lane,” Ramos said. Changes are also in the works to better control the flow of traffic at the intersection of 40th Street and Roland Avenue.

HHAC members consider these changes a separate issue, a deflection from their other objections to the park plan. Ramos says they were in line to happen before the tower controversy came up.

“Traffic calming is not a consolation prize,” she said. “It is going to happen whether the roads are reopened or not.” 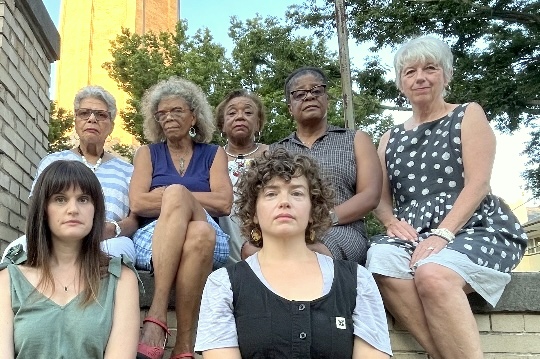 Place to Come Together

One vocal road closure advocate who spoke with The Brew is Michael Falk, who lives on Roland Avenue in Rolden, the neighborhood just south of the tower.

An early organizer of the Friends of the Roland Water Tower group, he said the crumbling structure was fenced off shortly after he moved there in 2008, attracting a certain amount of broken glass and drug paraphernalia.

As his neighborhood’s representative on the park steering committee, Falk stands by its full-road-closure recommendation as “very clear-eyed and rational.”

He doesn’t buy the argument that keeping the roads open is a matter of access, describing that concern as “more a question of convenience.” Where some say the roads are needed for people to be able to go in and out for medical emergencies, Falk talks about cars zipping by on the roads as a short-cut.

Things have changed in the area, he also said. Although he does not have children, he said the families that have moved into Rolden recently “don’t feel comfortable bringing their children there as it’s presently configured.”

And he questions whether the Hoes Heights Action Committee is representative of the community as a whole.

“Things have become very emotional. We need to lower the temperature so more people can speak their minds,” Falk said, stressing the vision that motivated him to get involved in the Water Tower in the first place.

“A park could be a great place for people to bring their children, to come together as neighbors.”