Why is Baltimore City Council President Nick Mosby in such an extraordinary rush to pass Bill 22-0292?

The bill, which he sponsored and is coming before the City Council tonight for final passage, would amend provisions of the Elected Officials’ Retirement System (EORS), slashing from 12 to 8 the years of service required for current and future elected officials to vest in the right to receive pension benefits at age 55.

The haste isn’t justified by Question K, the charter amendment approved by voters earlier this month, that will prevent elected city officials from serving more than two consecutive four-year terms in the same office.

Only terms of office beginning on or after 2024 count against the limit, meaning that no current official will lose the opportunity to vest in a pension under existing plan provisions because of term limits.

There is ample time before the 2024 election for a more considered approach, as urged by Deputy Finance Director Robert Cenname, who said that he didn’t understand the rush.

Nor did David Randall, executive director of EORS, who pointed out that “it is highly unusual for elected officials to enhance their benefits while in term.”

In my opinion, the purpose of the undue haste is to avoid scrutiny of a bad piece of legislation that has nothing to do with term limits.

Its primary intent is to protect certain members of the Council, including Mosby, from loss of future pension benefits if they lose at the polls before vesting in those benefits.

It also appears to target Mayor Brandon Scott for a dramatic reduction of his future pension benefits. 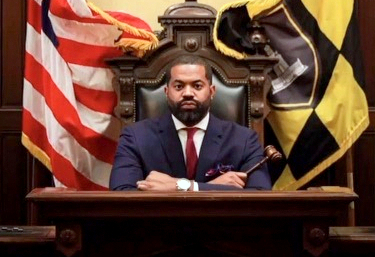 Nick Mosby poses in 2021 in his ceremonial chair at the City Council Chambers. (Office of the President)

The mayor, comptroller, and the 15 members of the City Council participate in the EORS.

If they first became members of the EORS on or after December 6, 2016, they vest in the right to receive an annual pension at age 55 once they have 12 years of service.

A 2016 ordinance changed the vesting and age eligibility requirements, but “grandfathered” elected officials who first became members of the EORS before December 6, 2016 in the requirements then in effect. The grandfathered members vest in the right to receive an annual pension at age 50 once they have 12 years of service.

They also vest once they have 16 years of service regardless of age and are exempt from the cap on the amount of their annual pensions.

The annual pension for all members is equal to 2.5% of their “annual earnable compensation” multiplied by their years of service.

For elected officials who first became members on or after December 6, 2016, the amount is capped at 60% of their annual earnable compensation, which is defined as “the annual salary authorized for the highest-paying elected position held by the official.”

The “service” used to determine vesting under the EORS includes not only actual service as an elected official but also service based on prior employment that is “transferred” from another city pension plan, a state plan (including the Legislative Pension Plan), or another local government’s plan as allowed by the state’s “pension portability” statute.

Transfers of service are voluntary and subject to certain conditions, including complying with time limits on requests for transfer and depositing employee contributions withdrawn from the prior system into the new one. The years of service credited to a member through transfers are not subject to public disclosure under the Maryland Public Information Act.

The advantages of receiving the pension go well beyond the monthly check.

Once officials begin receiving pensions, they are eligible to participate in the group medical, dental and prescription drug insurance plans available to other city retirees. If eligible for Medicare, they can enroll in the city’s Medicare Advantage Plan with prescription drug coverage.

As amended, the Mosby-sponsored bill provides that an elected official who first became a member of the EORS on or after December 6, 2016 “or is a member and serving in office as of December 1, 2022” vests in the right to receive an annual pension at age 55 once they have 8 years of service.

(The language in italics was added by the bill to existing law.)

The italicized language effectively would eliminate the “grandfathering” of current members who joined the EORS before December 6, 2016 in the vesting and eligibility requirements in effect before the 2016 ordinance.

As a result, it would shorten vesting for the grandfathered members from 12 to 8 years, but increase the age at which they’re eligible to receive pensions from 50 to 55. They also would lose eligibility to receive a pension after 16 years of service regardless of age.

Why wasn’t that straightforward, more legally defensible approach taken? I believe that the likely answer is that the sponsor wanted to do more than change vesting requirements.

Scott has been in local elected office continuously since 2011 and therefore has at least 11 years of service, just one year shy of the 12 needed to vest under existing law in the right to receive a pension at age 50.

He may already be vested under existing law if he has received credit for his city service prior to joining the Council.

But if he isn’t vested and the bill passes, Scott will not become eligible to receive a pension until he turns 55, at least according to the language of the bill.

The Mosby bill could cost Mayor Scott a bundle.

At his current salary, a five-year delay in receiving a pension could cost Scott about $323,447 in lifetime payments if he leaves office in 2024 with 13 years of service. And that doesn’t include the value of retiree health benefits.

What the bill says and what actually will happen are two different things, however.

If Scott is vested under existing law when the Mosby bill takes effect on January 1, 2023, there is no doubt that a court would hold that the bill cannot divest Scott of benefits already earned.

Even reductions of plan benefits in which current members have not vested must be “reasonable and necessary” in the context of the financial health of the EORS under the standard applied by the Maryland Court of Appeals.

This is why members were grandfathered under the 2016 ordinance.

Impact on Other Electeds

In addition to Scott and Mosby, there are three other elected officials who first joined the EORS before December 6, 2016.

The bill would likely have an adverse impact on Councilman Eric Costello, although his situation is more ambiguous, and any impact would be far less than on Scott.

Councilwoman Sharon Green Middleton would be unaffected by the bill because of her age and length of service.

And Comptroller Bill Henry also would be unaffected unless he decides to leave office before next August when he turns 55.

Mosby first became a member of EORS when elected to the Council in 2011. Under the plain language of the existing law, he is grandfathered under the pre-2016 vesting and eligibility requirements.

If so, the impact on him depends on whether he has credit for his past service on the Council and as a delegate in the General Assembly.

If he has no credit from either, he will have to win re-election in 2024 and again in 2028 to vest under existing law in the right to a pension at age 50.

If he only has credit for one of those periods of service (either for his previous five years on the council or for his three years in the General Assembly), he will have to win re-election in 2024 to vest.

Did Mosby decide that having a small but guaranteed pension is better than risking no pension at all if he loses the next election?

He will lose that opportunity if the bill passes and is signed into law by Mayor Scott. In this scenario, he will be subject to the eight-year vesting requirement.

But he won’t be eligible to receive a pension until he is 55. At his current salary, delaying his pension five years would cost him about $214,175 if he leaves office in 2024 with 13 years of service.

I doubt that Mosby would have proposed the bill knowing that it would cost him $214,175. It is more likely that he lacks the 12 years of service necessary to vest under the pre-2016 requirement.

Under the plan as amended by the bill, he would vest at the end of 2023 with the right to receive a pension at age 55, even if he only has credit for his previous five years on the Council.

Did Mosby decide that, at age 43, a bird in the hand is worth two in the bush, especially with the prospect of a difficult election looming in 2024?

An annual pension of about $29,655 at age 55 (assuming he leaves office in 2024 with nine years of service) is sure better than no pension at all.

The Smell of Self-Dealing

The city’s EORS is a very generous plan, although the 2016 ordinance makes it less generous for new members than it was for elected officials who first became members before December 6, 2016.

If Scott, for example, leaves office in 2024 and has credit for at least 3 years of his employment with the city before becoming a member of the Council in 2011, he immediately will become eligible for a lifetime pension of about $79,618 on the basis of 16 years of service regardless of age. And he will be only 40 years old.

That’s obscene, but the time to prevent the obscenity was long before now.

The excesses of the EORS were well known when former Mayor Sheila Dixon was forced from office in 2010, but retained her $83,435 annual pension, which has gotten bigger over time.

The excesses of the pension plan for electeds were well known even before Sheila Dixon kept her pension after being forced from office.

The only thing that Bill 22-0292 would accomplish would be to accelerate vesting in existing benefits by current members who are not already vested, insulating them from future reform of the EORS.

Self-dealing by lawmakers is always problematic. But few pieces of legislation have an odor as strong as Bill 22-0292.

Adding insult to injury, the public does not have access to retirement records showing exactly how the bill would affect each Council member who votes on it tonight.

Rushing a bill like this through the Council is a slap in the face to city taxpayers. And it is a reminder why term limits for elected officials are so popular.