The barriers blocking the roadway at the Roland Water Tower have been removed by Mayor Brandon Scott following complaints that they shut off access to the historic Black neighborhood of Hoes Heights and other areas west of the tower.

“Victory!” declared Betsey Heeney, a member of the Hoes Heights Action Committee, which has been pressing City Hall to change course and reopen the roadway.

At some point late yesterday, Heeney said, crews hauled away the jersey barriers that blocked the road circling the south side of the tower.

The concrete barriers were installed in October after unknown persons had chained light-weight plastic barriers to a utility pole.

Today an occasional vehicle could be seen moving slowly from Evans Chapel Road to Roland Avenue, alongside the recently restored historic tower.

“It was good old-fashioned organizing,” Heeney told The Brew, explaining that “we reached out to the people most impacted, who then reached out to others in the city to get across how important this is. Then, somehow, this message made its way to the mayor.”

A spokeswoman for Scott’s office contacted by The Brew has not yet provided a comment.

A city official had told The Brew a month ago that the barrier was needed for safety, but Scott overruled that decision and instructed the Department of Public Works to remove the barriers.

“A road that has not been bothering residents for over 100 years should not be changed,” he was quoted as saying in an Afro story written by former Mayor Catherine Pugh.

Scott’s action signals that both tower roads will be open to vehicles, as they have been since at least the early 1970s when buses stopped using them as a turnaround. 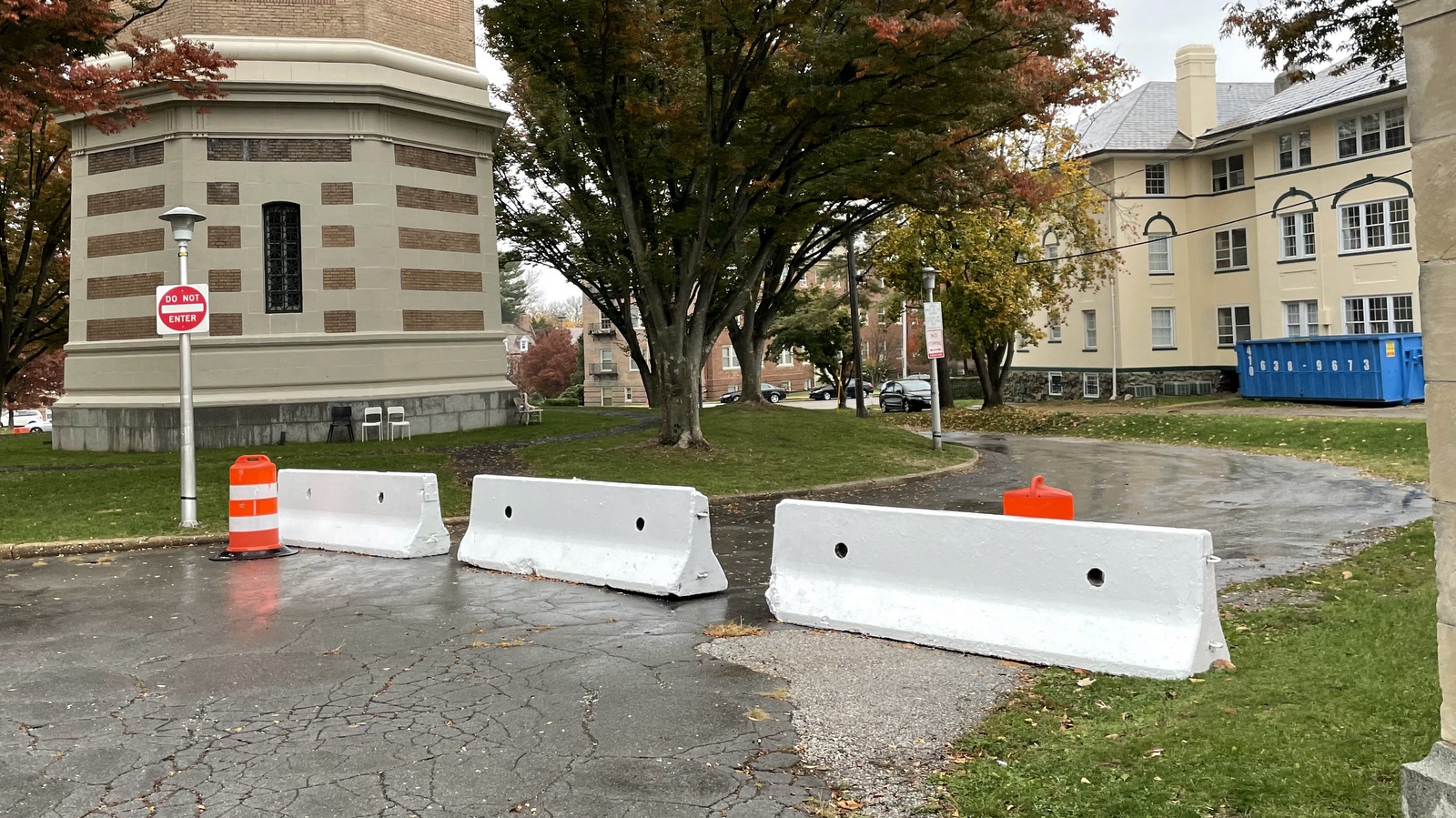 Concrete barriers had blocked off the road on the south side of the Roland Water Tower. (Fern Shen)

The small roads around the tower blew up into a big controversy after the completion of a $1.5 million restoration of the 117-year-old brick and terra-cotta structure by the Roland Park Community Foundation (RPCF).

As work neared completion on the city-owned landmark, located at Roland Avenue and University Parkway, RPCF launched into planning for a park on the .75-acre parcel at the tower’s base.

When the park steering committee announced a design that eliminated the roads, Hoes Heights and neighboring Heathbrook protested.

Established by a formerly enslaved man, Grandison Hoe, the neighborhood was a sanctuary for Black residents in a sharply segregated city.

The tower roads provided literal and symbolic access to their tucked-away neighborhood, residents and their allies said, arguing that their closure forced residents to use unsafe intersections at either end of Evans Chapel Road to enter and leave the area.

RPCF officers, meanwhile, said Hoes Heights residents were properly included in the park planning process, that many residents in nearby neighborhoods favored a park and that eliminating the roads was the only way to make a park there safe for children and families.

As critics pressured lawmakers and City Hall to intervene, the road on the north side of the tower remained open, but the south side roadway was closed.

Councilwoman Odette Ramos called that decision “a compromise” as she and Councilman James Torrence began the process of formulating a plan to survey the communities about the future of the roads.

Members of the Hoes Heights Action Committee, however, said they resented the preemptive placement of the barriers by RPCF. They came away angry after an October meeting where a representative of the Department of General Services said they were there to stay.

One factor in the controversy has been lingering resentment towards Roland Park, where wealthy white residents once employed many Hoes Heights residents as cooks and gardeners. Land deed covenants forbid Roland Park properties from being sold to African-Americans or Jews.

To underscore that history, the Hoes Heights Action Committee held a town hall meeting “to create greater understanding of the historical context of the Roland Water Tower road and its importance to the historic Black community of Hoes Heights.”

Moderated by Dr. Sheri Parks, vice president of Strategic Initiatives at the Maryland Institute College of Art (MICA), the November 17 meeting included remarks by Dr. Lawrence T. Brown, author of “The Black Butterfly: The Harmful Politics of Race and Space in America.” 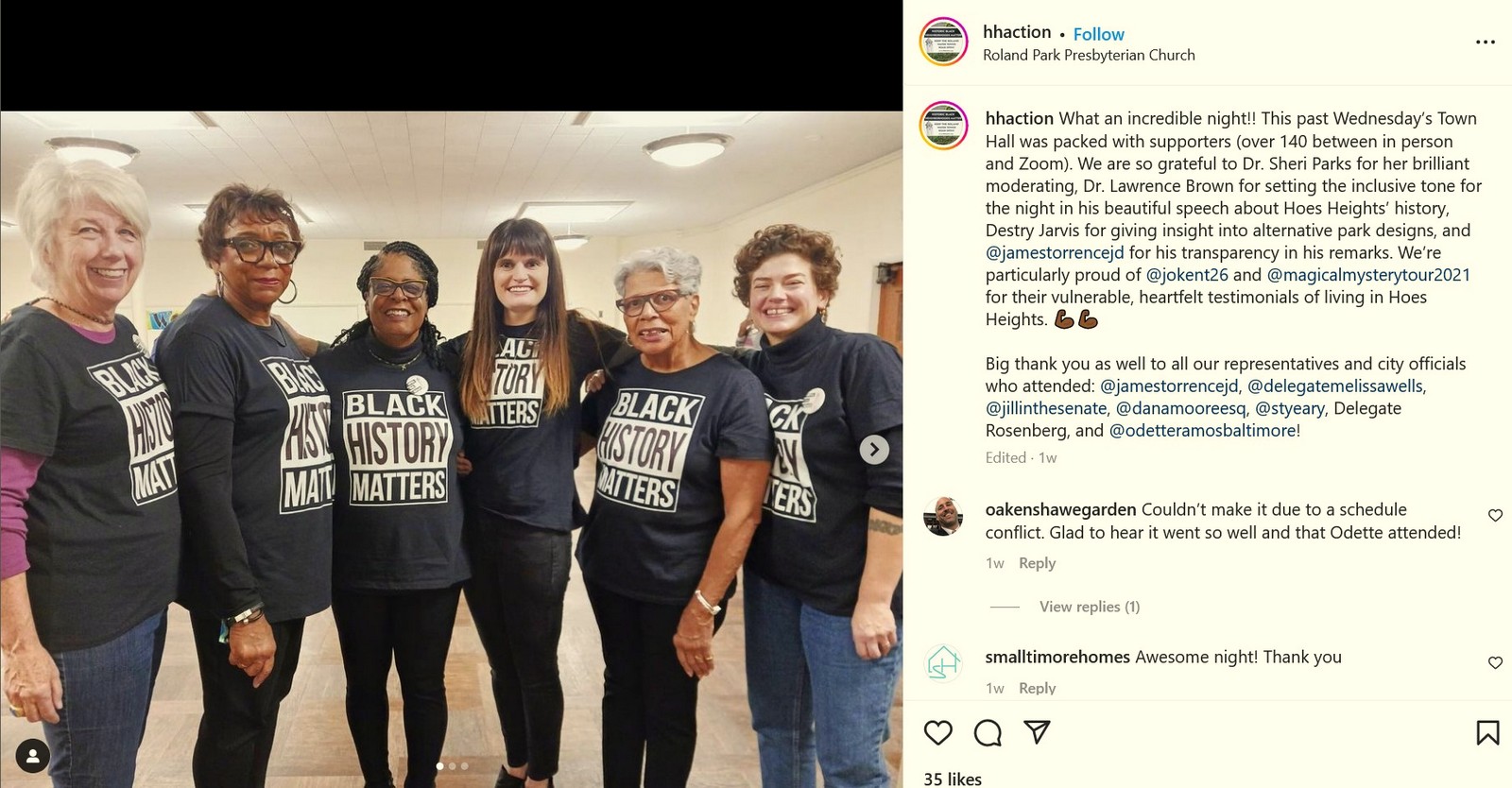 The roadway and park issues now rests with Torrence, who has been charged with overseeing the process of determining residents’ wishes for the site.

Reached tonight by The Brew, Torrence said a draft version of a new survey will be unveiled at two public meetings, whose dates will be announced later this week.

“People will have a chance to say what they like or don’t like about it, and we can make sure it’s designed the way everyone wants. And I want to be very transparent about this,” the 7th District representative said.

The process will include lots of neighborhood canvassing, probably after the winter holidays, to make sure people who are not online have an opportunity to weigh in, Torrence said, adding:

“I’ve got a good pair of shoes because I’m going to be right in there, knocking on doors.”