I saw something that shocked me last night as I was driving along I-83 looking down at the brightly-lit building at 421 Fallsway in downtown Baltimore:

There were people sleeping on the concrete outside the offices of Health Care for the Homeless, a row of them sprawled on the flat, covered area in front of the entrance.

I couldn’t be sure from up on the expressway, so I grabbed my teenage son for company and drove back. I found eight people, curled up under blankets, their shoes and water bottles lined up neatly beside them. It was a cold December night (about 36 degrees), four days after Christmas, and it was after 1 a.m.

One man’s bedroll was practically propped up against the front door. Through the glass that formed these peoples’ headboards, I could see the large empty lobby with chairs and pictures on the wall and signs about art classes. During the day, this $15 million building offers medical care, mental health services, addiction treatment and other services to people experiencing homelessness.

Was there no room at the city’s nearby shelter? Had they been turned away? I didn’t want to disturb the sleeping people and ask what brought them there, but I wondered.

(I hope they’ll forgive me for invading their privacy. I don’t think anyone’s faces were showing in these photographs. It’s a brightly-lit spot with security cameras. One man peeked out at me, then scrunched back under his blanket.)

At the Epicenter of Baltimore’s “Social Services Campus”

Today I phoned the people who run Health Care for the Homeless, but they haven’t gotten back to me, perhaps because of the holidays. I’m looking forward to talking with them to learn more about the encampment on their front stoop. 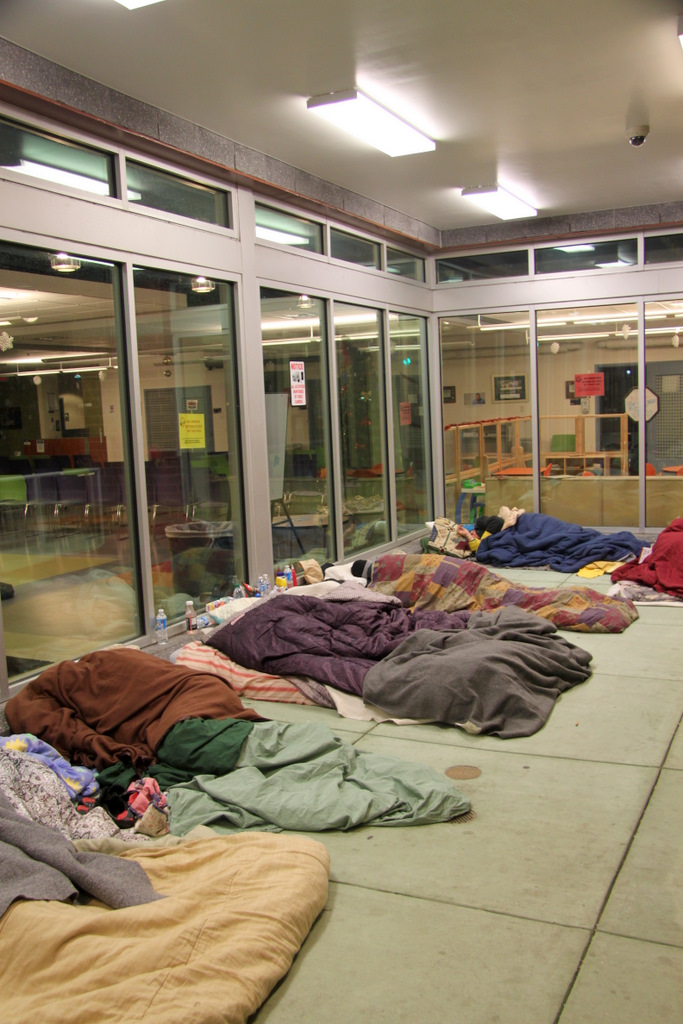 The people sleeping outside the building were wrapped in blankets, their heads covered against the bright lights and cold. (Photo by Fern Shen)

I’m putting up these photos now because it got to me seeing people sleeping on hard cement in the epicenter of what could be called Baltimore’s social services campus.

Within two blocks of Fallsway there’s HCH, Our Daily Bread (the soup kitchen), and the Harry and Jeanette Weinberg Housing and Resource Center (the new city shelter.)

Caring people have their offices here, politicians give speeches here, 10-year plans to eradicate homelessness steer our tax dollars here – and yet people are still sleeping out in the cold.

The ironies are relentless when it comes to this issue in Baltimore.

In the last two months alone, there’s been a threatened lawsuit about city homeless services, a solidarity sleep-out vigil dispersed by police, and a City Council hearing where officials said homeless shelters are meeting the demand – and yet people are still sleeping out in the cold. 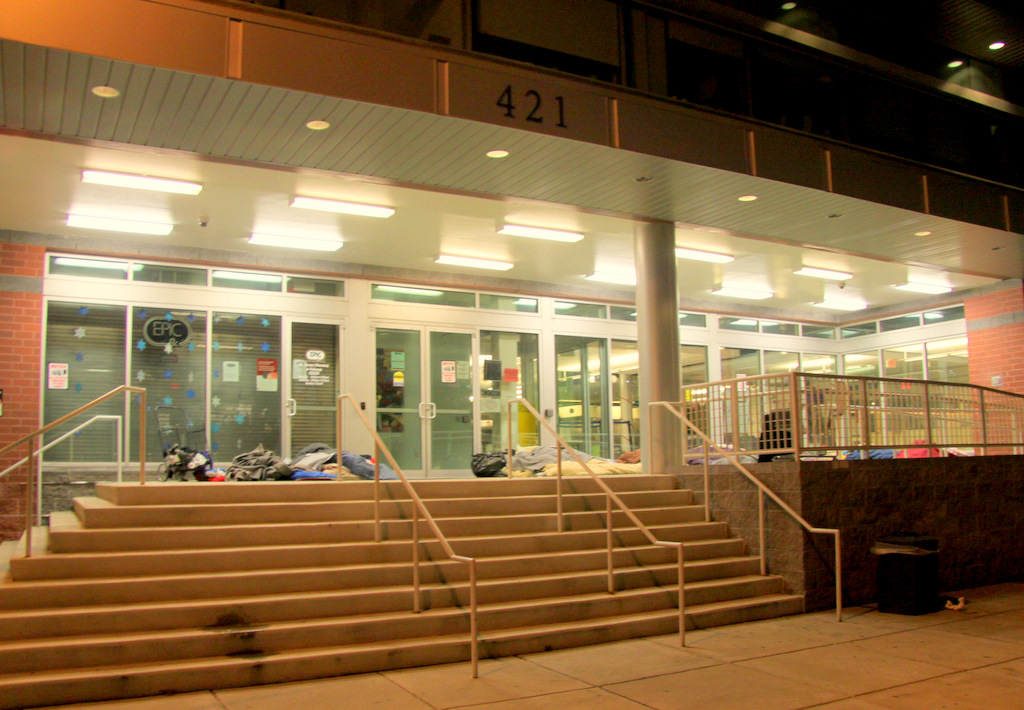 A couple of police cars cruised by the brightly-lit spot, but they didn’t disturb the sleepers. (Photo by Fern Shen)

We’ve got all kinds of grim statistics suggesting the problem is worsening – 4,100 people living on the street last winter, up from 3,400 two years earlier; 111 people dying homeless in the city in 2011, up from 45 in 2009 – and yet we can’t, despite all the proclamations and plans, accommodate them.

The issue of homelessness gets lots of attention, but the actual people who are homeless seem to get little.

Recent stories in The Brew about homelessness and the new homeless shelter:

Why the new shelter is smaller than the old one, and other homeless stories (11/30/11)