What began as a starry-eyed relationship between City Hall and a group of local promoters has descended into bitter divorce as the city today terminated its agreement with Baltimore Racing Development (BRD) and demanded “immediate payment” of $1.7 million owed to the city.

“Like many Baltimoreans, I hoped that BRD would restructure, recapitalize and begin to pay taxes and debts by the December 31 deadline,” Mayor Stephanie Rawlings-Blake said in a statement issued by her press office.

But failing to “take the appropriate steps to put the company on a sustainable path forward,” Rawlings-Blake said she was forced to sever ties with the group – and end its five-year contract with the city four years early.

BRD currently owes $12 million to its creditors and had little chance of offering a plan to settle unpaid city taxes and other obligations by the December 31 date that the mayor had demanded.

The group’s shareholders and managers have been finalizing an agreement with Felix J. Dawson, a former Constellation Energy executive, who had put forth a reorganization plan.

Mayor Lauded the Financing Model in 2010

Rawlings-Blake’s recent comments about BRD contrast with the enthusiasm she expressed for the Grand Prix promoters when her administration reached an agreement to stage the race in 2010. 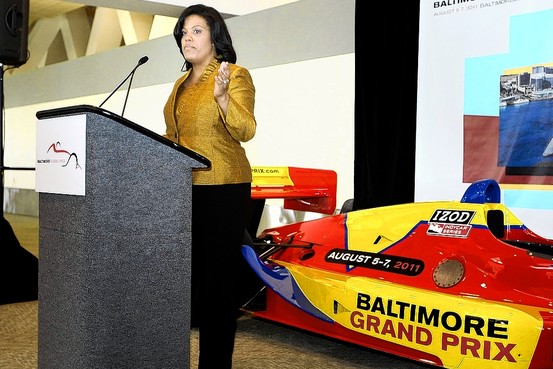 “Once I saw that the financing model was strong and feasible, I knew it was something that we could get behind,” she said at the time.

Rawlings-Blake continued to defend BRD in the face of heavy criticism by candidates who opposed her in the Democratic mayoral primary held two weeks after the event.

Today she reiterated that the race was a success, generating $47 million in direct and indirect economic impact, a figure developed by the city’s tourism agency, Visit Baltimore.

Today’s termination places the future of the race into question, although the city has indicated it hopes to find another organizer of the event, which remains on Indy Car’s 2012 schedule.

The city is seeking “an additional $250,000 because services that were to be provided by BRD in the Event Management Plan were not provided by BRD to the extent planned and required,” today’s statement said.

The above figures do not include the $7.75 million in state and federal highway funds that Baltimore allocated to prepare downtown roads for the race as well as additional funds lent to BRD by the Maryland Stadium Authority.

The highway allocations were justified by city officials who said the race would be held for five years and generate more than $250 million in economic benefits to the city.

The Brew documented last August that the race did have a salutary effect on Rawlings-Blake’s reelection. Investors, lawyers, contractors and others connected to the race contributed at least $24,200 to her campaign coffers.