The jarring sight we saw in the wee hours of the morning Thursday at Baltimore’s new $15.5 million homeless services clinic – eight people sleeping in barely above freezing temperatures outside the building on its “front porch” – was not unusual, it seems.

Kevin Lindamood, president and CEO of Health Care for the Homeless (HCH), said people began sleeping outside their building at 421 Fallsway a year ago – and the “porch population” that has been coming there ever since is “not static.”

Caseworkers are assigned to the people who turn up, meet regularly with them and often manage to find them a bed somewhere in town, Lindamood said.

“We’ve had couples, we recently had two women and, at one point, we had a woman who was eight months pregnant,” he said, adding that the staff of the clinic (it is not a shelter) eventually found her a place to stay that was out of the elements.

The first person to camp out on the porch had been an undocumented immigrant and so, reluctant to involve the police, the staff had allowed the man to stay while they tried to get him counseling and other help.

As the porch encampment grew into a steady phenomenon, HCH enhanced the lighting there and installed security cameras and signs to make the area more secure, Lindamood said.

But he acknowledged that it is troubling to have people sleeping on the cold cement on the very doorstep of an institution dedicated to helping such men and women. 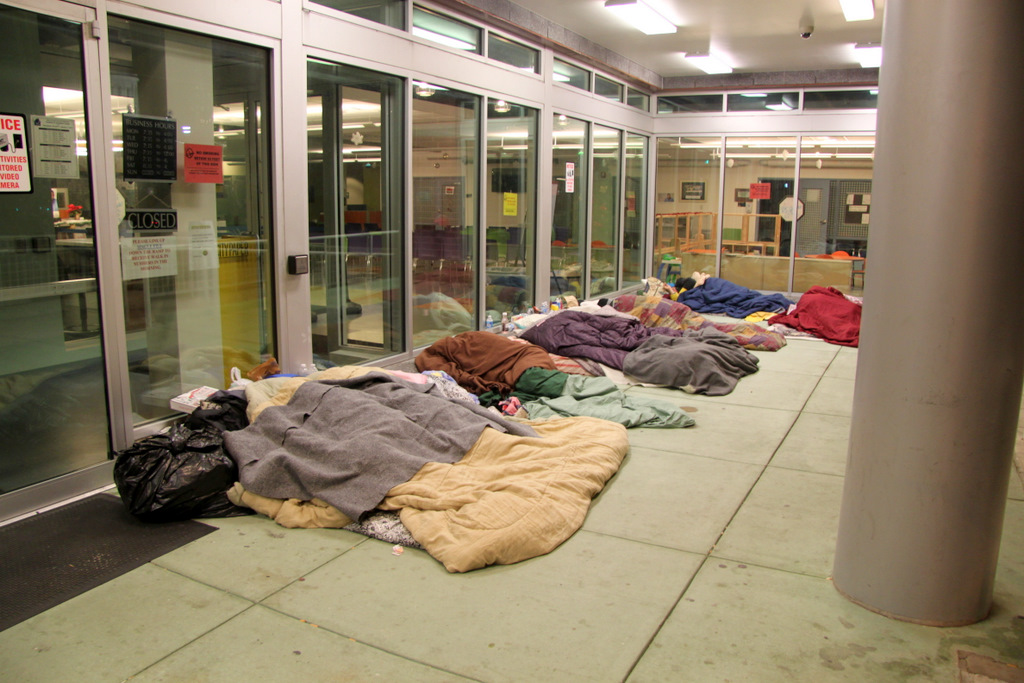 An eight-months pregnant woman was among the people recently sleeping outside this Baltimore homeless services clinic. (Photo by Fern Shen)

“It frustrates the hell out of us,” Lindamood said. The current thinking in the city and among many homeless service providers, he noted, is that the focus should shift away from emergency shelter and more toward permanent housing solutions, making condoning the porch people “fairly controversial.”

“But the only way to not have people sleeping on the porch would be to physically prevent it and that’s not in keeping with our mission – to put a gate up out there wouldn’t be right,” Lindamood said.

“And yet, I mean, we are helping people to sleep on our porch! It tears me up inside.”

So why can’t a building full of social workers practically next door to the city shelter get these people in out of the elements?

The $8 million, 250-bed Harry and Jeanette Weinberg Housing and Resource Center, to the consternation of homeless advocates, opened in June with 100 fewer beds than the shelter building it replaced. Has that been a factor?

Lindamood offered a number of reasons for the steady stream of people turning up on HCH’s front stoop, including the relative safety of the building. “On top of the [fact that it’s got] lights, it’s near the city [motor pool] gas station, so a lot of police cars go by,” he said. “They feel safer there.” He also noted that people with mental health, behavioral or addiction issues are sometimes less likely to wind up in a shelter.

But pressed on the role fewer city shelter beds might play in boosting the porch count, Lindamood said, “we have had people who said they’d been turned away” from there. (Sources have told The Brew the porch encampment really surged in the summer, around the time of the switchover to the new city shelter, a.k.a. “Code Blue.”)

Lindamood went on to observe, in an interview last Friday, that the city shelter “was at capacity last night. That tells you something.” 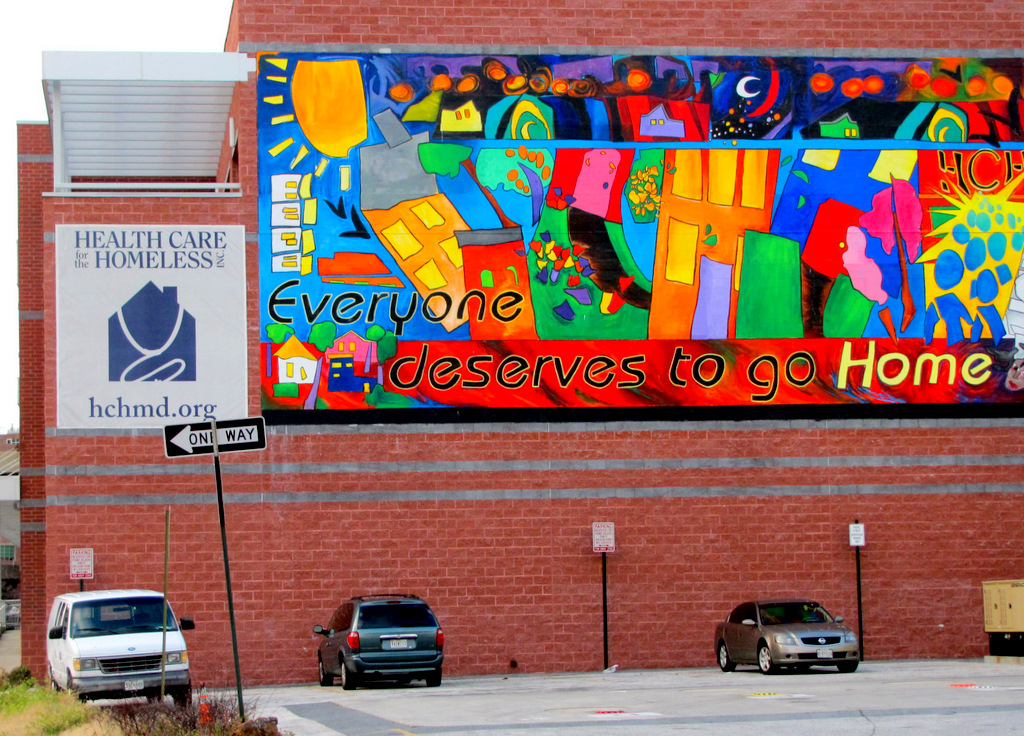 Mural on the wall of Health Care for the Homeless building. Yesterday seven people were found camped out on the building’s “front porch” in the late afternoon. (Photo by Mark Reutter)

The downsized and filled-up city shelter is only one piece of the problem.

Across the city, shelter beds made available by a number of providers for Baltimore’s growing homeless population are inadequate to meet the need. There are about 2,000 emergency and transitional shelter beds at the moment and at last count, in January 2011, there were 4,088 people homeless. 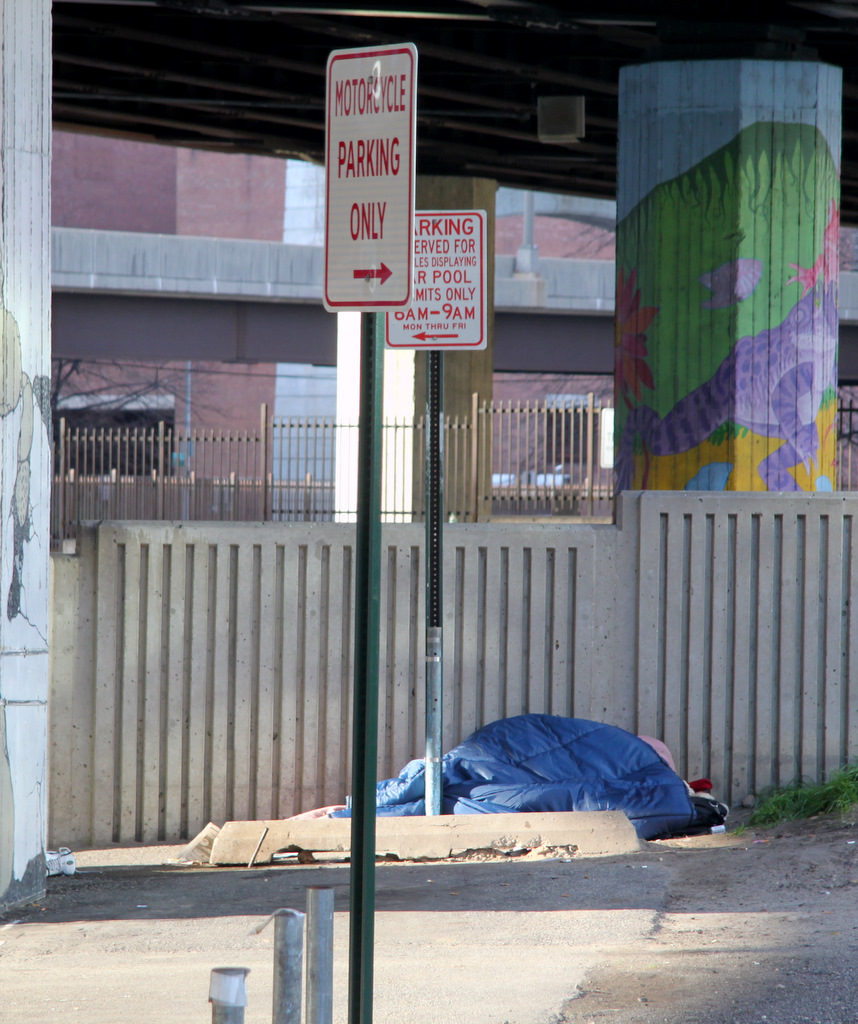 Someone sleeping under the JFX across the street from Health Care for the Homeless. (Photo by Fern Shen)

Advocates believe that the official counts underestimate the problem and that, over the course of a year, 40,000 people will experience homelessness in Baltimore.

“There are people sleeping outside all over the city,” Lindamood said, describing the shift in the kinds of people seeking shelter and services these days.

“The traditional shelter client was a single man. Now you’re seeing mom and dad and two kids sleeping on a bench,” he said. “You have people who’ve never been at a shelter before. They’re coming in wide-eyed.”