He would like to live in a clean apartment, enjoy two hot meals a day and get his wife treated for substance abuse. But Linwood Hearne figures such things aren’t likely to happen anytime soon, so he bundles up and braces for another day as one of Baltimore’s homeless.

At 62, Linwood is known as “the old man” who sleeps, with his wife, on the front vestibule of the Health Care for the Homeless building just five blocks from City Hall.

He and his wife have been regulars at the spot since late 2010 when he was released from jail and found out that he had been evicted from his public housing unit.

Like others who cluster around “the porch” of the HCH clinic at 421 Fallsway, Linwood refuses to go to the city’s new shelter two blocks away because he’s convinced it’s dangerous and the employees “disrespectful” to people who seek a bed at night. He also doesn’t want to be separated from his wife (the Harry and Jeanette Weinberg Housing and Resource Center keeps men and women in separate dorms, even married couples).

The Hearnes don’t live on the street all the time. They shower and spend some nights with his sister-in-law, who charges them a fee for the privilege. When I talked to Linwood yesterday, he was hoping to sleep indoors last night to avoid “this cold, hard, rugged weather,” but had no idea whether that would be possible.

So he needed to go and talk to his sister-in-law. And he was looking for his wife, who had promised to meet him at the HCH building.

There are as many homeless stories as there are homeless – 4,088 people according to a single-night count last January and as many as 40,000 homeless for at least one night in Baltimore over the course of a year. This is the story of one of them.

Linwood Lewis Hearne was born on July 23, 1949 and grew up in Washington, D.C. He has lived in Baltimore for the last 20 years and says he’s worked as a security guard, handyman, restaurant cook and janitor at Thurgood Marshall-BWI Airport.

He admits that drinking was a problem. According to court records, he was hauled in for disorderly conduct, alcohol intoxication, battery and second-degree assault in the 1990s – and at least once was reported to be homeless. Ten years ago, while working at the airport, he said he suffered a stroke that left him paralyzed for six months. He hasn’t worked since and walks slowly with a cane.

He fell in love late in life and and married a woman who was battling drug addiction. Two years ago, he readily admits, he knifed another woman who he said was a drug dealer trying to lure his wife into selling drugs.

“I cut her up to stop what was going down,” he said. He was convicted of first-degree assault and given a five-year sentence, of which four years and three months were suspended.

When Linwood got out of jail in 2010, he found that his wife had lost their unit at the Douglass Homes due to nonpayment of rent.

“I Didn’t Wake up and Want to be Homeless”

With less than $1,000 a month coming from Social Security between the two of them, Linwood said they couldn’t afford to rent another house. They started living on the streets.

“I don’t believe in shelters,” he said at first, then amended his statement to say that he won’t go the city shelter. Asked why, he replied, “The staff are very unkind to people. They have an attitude. They treat you, well, like trash. I won’t stand for that.”

Talking to a friend sitting nearby, Linwood elaborated, “I didn’t wake up in the morning and want to be homeless. It was jail and one bad thing after another.” 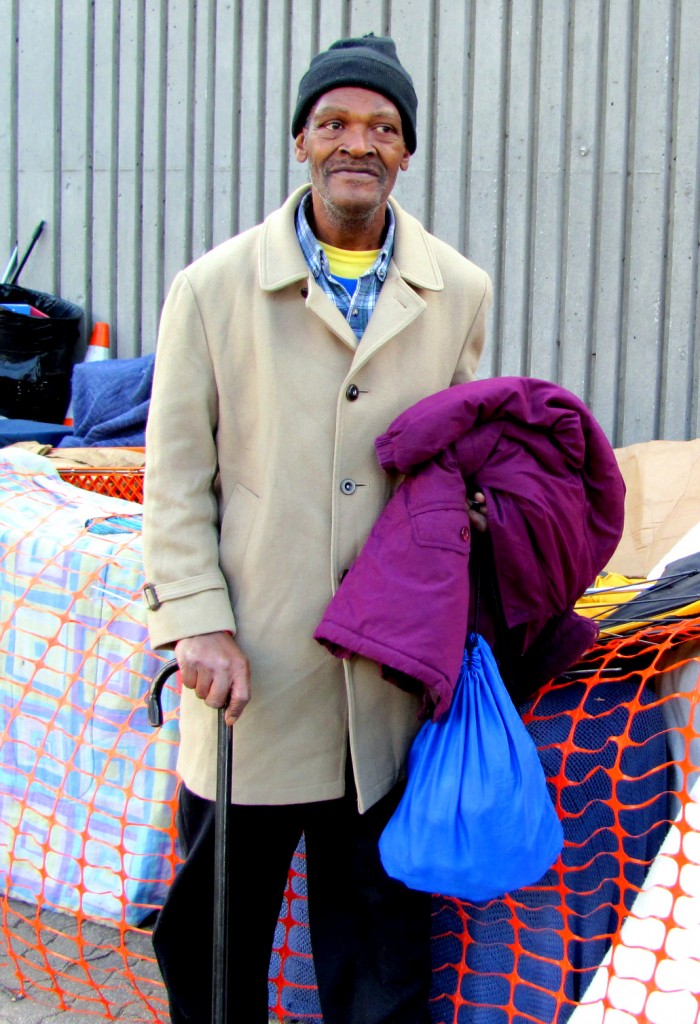 Linwood proudly holds the parka he will present to his wife. (Mark Reutter)

He said he has put in enormous time and energy trying to help his wife with her drug addiction. “She graduated from a program,” he said, but has suffered relapses.

He said he never did drugs and has been sober for more than a year. “I did drink, but I don’t mess with it anymore.”

Health Care for the Homeless has been a major benefactor in his life, helping him and his wife with several medical problems.

By allowing them and others to sleep on the front porch at night, “we are very safe, especially during the summer. People know me, and keep a watch on things. They know I don’t cause trouble. But the winter is bad because of the cold.”

Shoes and a Purple Parka

Asked about his future plans, he said he wants to find a house because “I want to keep my wife in a place where she can be warm.”

He’s applied for public housing, but a fixer-upper would be just fine, he said, because he has the knowledge and willpower to rehab any building.

But until that time, “I go up one mountain and down another. I ask God to keep a shield around me. Me and my wife.”

And he gets by. He was wearing a pair of brown slip-ons yesterday that a stranger had given him. He needed shoes, and the slip-ons fit just fine.

He also was unexpectedly handed a purple parka at the HCH building. He appeared to be overwhelmed. Clutching the coat tightly as he walked out of the clinic, he said his wife would be happy to wear it.

In other words, his prayers for today had been answered. Linwood Lewis Hearne slowly headed toward his sister-in-law’s house, a stoic man facing a cold, hard January wind.