“This ain’t right,” said Will Aycock, one of dozens of homeless men who said they were tossed out of Baltimore’s new homeless shelter for two hours last night in freezing weather.

Aycock said he was resting inside the Harry and Jeanette Weinberg Housing and Resource Center when he and about 50 other men were told to leave the premises around 6 p.m. or “we’d be locked up for trespassing.”

Linda Trotter, acting executive director for JHR, the shelter operator, said the men were told to leave because the shelter was understaffed following a fight on Saturday between staff and a homeless man that left four staff members injured and unable to come to work last night.

Aycock said he has been using the shelter for the last seven months and had never been ordered out of the building before. He said, “I’m mad because, first, it’s cold. And second, it’s supposed to be a 24-hour shelter.”

Melvin Boyd was shivering next to Aycock.

“They won’t let me in tonight,” Boyd said, who was seen painfully moving in his wheelchair from the shelter’s entrance to join the other homeless men in front of Our Daily Bread across Fallsway.

Boyd, who is paralyzed on his left side, was noticeably shivering. “I’m freezing,” he said. 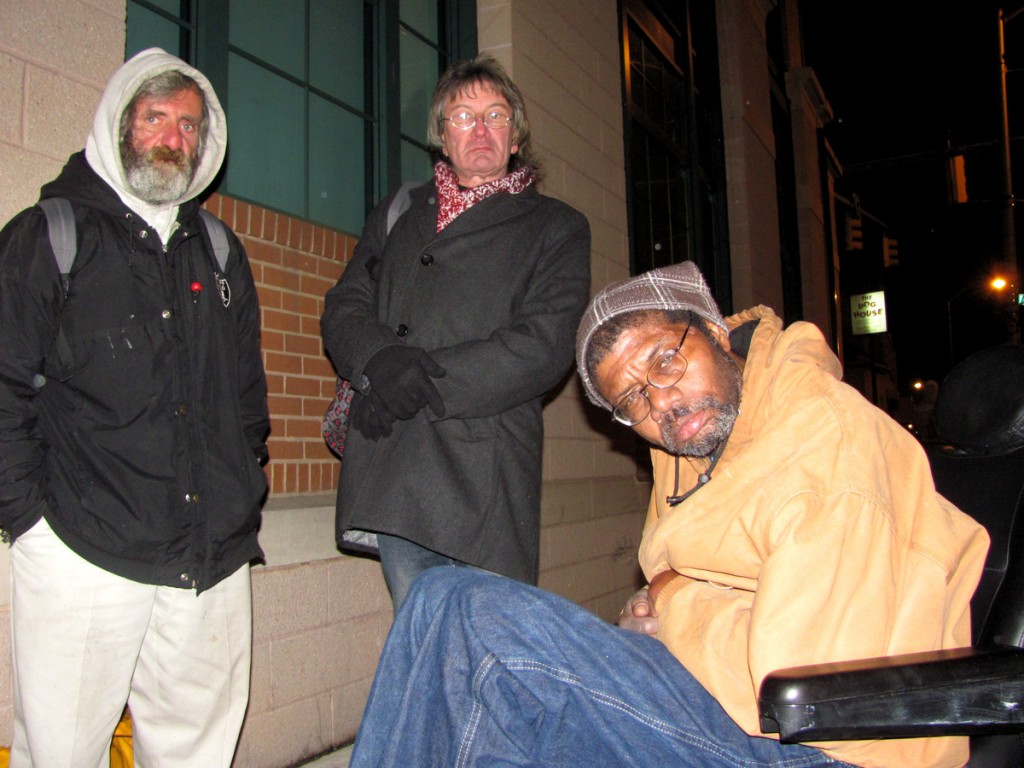 James Rubino, Edward Zentgraf and Melvin Boyd (in wheelchair) wait in the cold to return to the shelter. (Photo by Mark Reutter)

He and the other men interviewed said they were being “punished” because of the Saturday fight between a homeless man and a shelter supervisor.

When the homeless man reappeared yesterday evening, all of the recently admitted men were ordered out of the building, according to their account.

According to Trotter, the men were asked to leave simply because the night shift arrived at 6 p.m. and found itself short staffed. “It takes a lot of effort and a lot of skill to take care of 400 people [people in the shelter and people waiting for overflow space],” Trotter said this morning.

The men outside the shelter last night were critical of the staff. “The people that run it at night don’t know what they’re doing,” said one homeless man. Several others said they had run-ins with the staff, which they characterized as poorly trained.

“These aren’t your regular employees,” said a man who asked that his name not be used. “These are guys with their own problems. Some are fine, some are plain nasty.”

Asked about those complaints this morning, Trotter said, “I couldn’t ask for a better staff. They are loving and caring for the people they serve.”

She added that if the staff “may appear to be stern or adamant” to an outsider, that’s because they must keep order and handle some clients that are drunk or rowdy or “have issues.”

At a recent City Council hearing on allegations that the shelter was discriminating against homeless women, several people criticized JHR staff for “intimidating” women who spoke to lawyers or the media.

Last week, JHR was awarded $95,105 by the Board of Estimates to add 75 beds at the center through March 31 to handle the influx of homeless seeking shelter in cold weather.

An employee for JHR ordered a reporter away from the building last night and said no one would be admitted to the shelter until 8:30 p.m. when a bus was expected to arrive and carry some of the homeless to an overflow shelter.

Shortly after 8 p.m., however, the men were admitted into the shelter, including Aycock and Boyd.

A JHR supervisor named Mike declined to say what had prompted last night’s incident, referring all questions to Trotter, who was reached this morning. 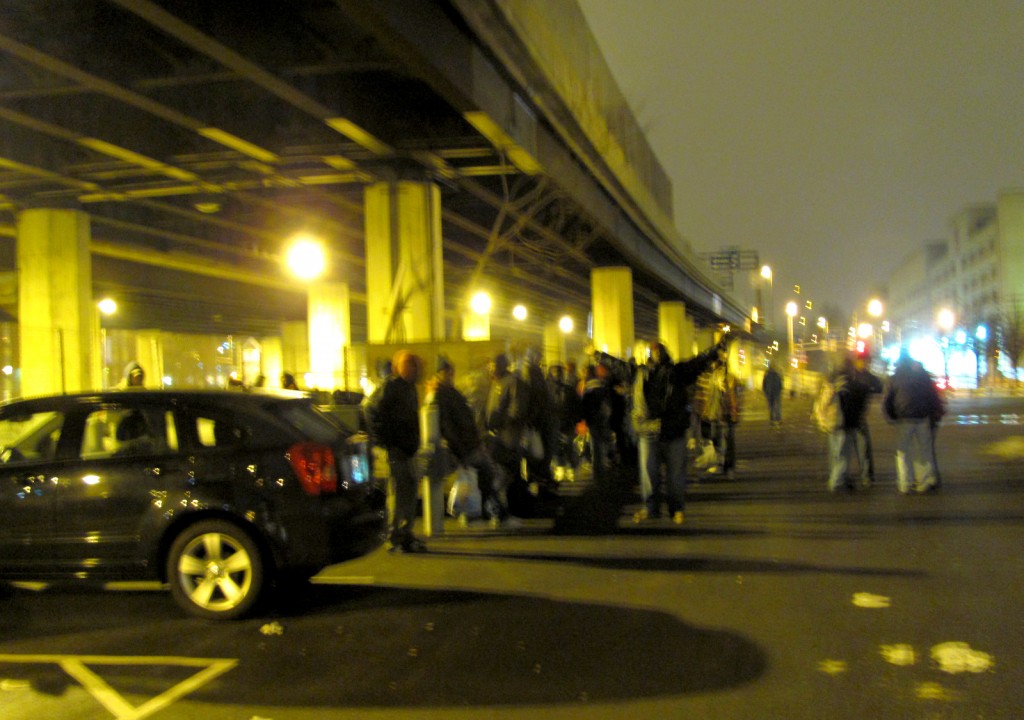 Some of the homeless men waiting to enter the city shelter last night. (Photo by Mark Reutter)