Up to eight city rec centers would close and a dozen more turned into after-school programs under the 2013 budget proposed today by Mayor Stephanie Rawlings-Blake.

The closings and transfers would save the city about $2 million out of a $2.3 billion proposed operating budget.

The mayor signaled that she plans to stay the course in reducing the number of city-operated rec facilities from 55 to about 30. However, the new budget marks a shift in strategy in how the lower number would be achieved.

While the administration previously wanted to turn at least 20 rec centers to third-party operators, today’s budget noted that only six facilities would be designated as “charter” centers and awarded to private parities.

Seven other rec centers would be operated as after-school programs through a collaboration of the Recreation and Parks Department and Baltimore City Public Schools. Another five centers “may” be turned over to city schools for undefined uses.

The shift in emphasis coincides with the poor turnout of bidders seeking to run the centers.

The city awarded four facilities (Brooklyn O’Malley, Collington Square, Easterwood and Lillian Jones) to private groups in a first round of bidding in December. A second round in January resulted in only five bidders, with several of them reportedly disqualified by the city.

Under today’s plan, only two more centers would be privatized. The four likely candidates are Towanda, Oliver, Greenmount or Hilton.

The mayor’s plan requires the school system to take over about 12 centers that share space with individual schools.

A top BCPS official, Trish Edwards, told the City Council last November that school principals were hesitant to assume the cost and responsibility of rec centers.

She pointed out that the purpose of the centers diverged from the core mission of education. 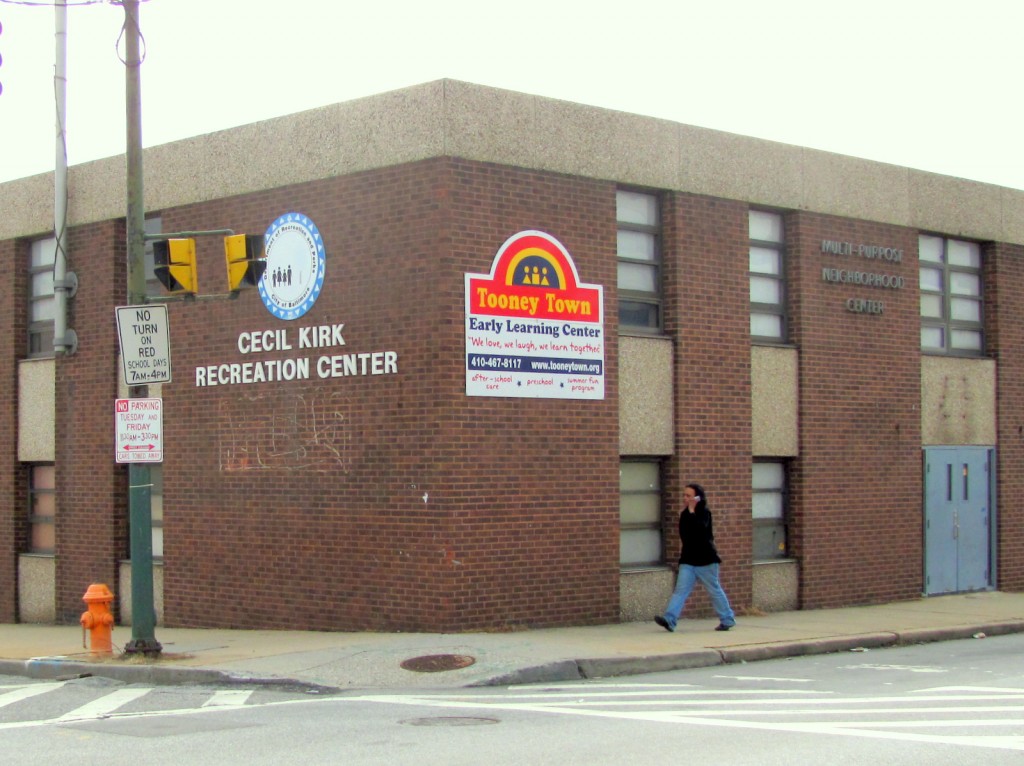 Cecil Kirk in Northeast Baltimore may be closed after the 2013 budget goes into effect on July 1. (Photo by Mark Reutter)

Edwards and other members of Alonso’s senior staff were not available for comment today.

A city official said today transferring rec centers to the school system was “in the works,” but not finalized.

The mayor’s plan leaves about eight centers liable to be shut sometime after August 1.

Among the facilities most susceptible for closure are Cecil Kirk, Central Rosemont, Crispus Attucks, Parkview, Rosemont and Solo Gibbs.

The 2013 budget calls for a $249,000, or 2.4%, increase in the rec center budget to reflect plans to expand programming and hours in the 30 facilities remaining in city hands.

Several centers, such as Bentalou, Herring Run and Roosevelt, have been designated as expanded centers, some to be enlarged over the next three years.

At the same time, many facilities will become “community centers” that will reduce the emphasis on youth recreation and increase programming for seniors and for community activities.

The overall rec center budget for 2013 is $10.9 million, with the average rec center costing about $200,000 a year. Because full-time employees would be transferred to other jobs, the savings from closing a facility would be far less than $200,000.

Another factor offsetting overall savings is the “seed money” that the city promises to private parties taking over a rec center.

So far, the city has awarded $150,000 to three operators – Boys and Girls Club of Metropolitan Baltimore, Omega Baltimore Foundation and Reclaiming Our Children and Community Project (ROCACP).

Between $100,000 and $150,000 is expected to be approved by the Board of Estimates for the second round of successful bidders.

So far, public and political opposition has slowed, but not blow off course, the mayor’s plans, which were originally set to go into effect on January 1.