It’s taken 13 years, but Baltimore is on the cusp of one of its biggest roadway projects – the reconstruction of Charles Street between 29th Street and University Parkway past the Homewood campus of Johns Hopkins University.

Expect major changes as Charles, both northbound and southbound, will be closed to traffic through the fall of 2014, with only limited auto access between Art Museum Dr. and 33rd St.

While the $25 million project will include street improvements between 25th and 29th streets, the bulk of attention will be on rebuilding Charles St. north of 29th, where the wide, tree-lined design is an outgrowth of Paris-trained “beaux arts” architect, James Wyatt, in collaboration with William Nolting.

Designed in 1900 for an age of horse-drawn carriages (even streetcars were banned from “the boulevard”), Charles St. came under assault as cars proliferated after World War II and southbound traffic was funneled awkwardly below University Parkway between a median strip.

Wear and tear continued to take its toll on the roadway in the 1980s and 1990s, even as Hopkins grew in size and other notable private and religious institutions lined its path.

Eventually, one of the two southbound lanes was turned into parking. But the traffic pattern remained not just aesthetically displeasing, but downright dangerous for students and other pedestrians trying to traverse the six lanes.

The main change to Wyatt’s design will be moving the westside median strip toward the center of the boulevard to accommodate two lanes of southbound traffic. Otherwise, the main cost will involve rebuilding the 100-year-old infrastructure with new utility pipes, streetlights, curbs, walkways, signage and better bicycle access. 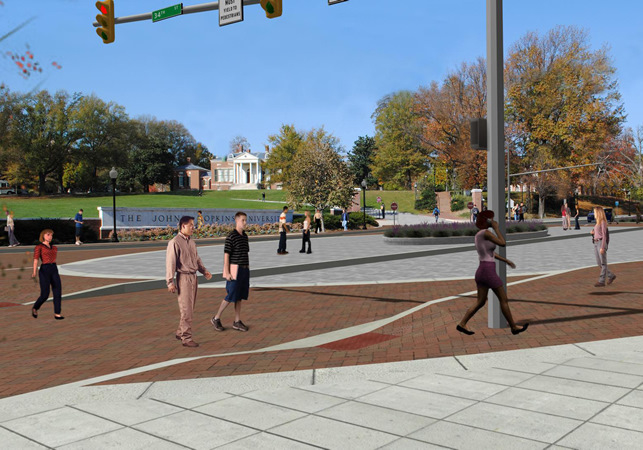 An artist’s rendering of the new Charles St. at 34th St. at the entrance to Johns Hopkins University. Below, a photo of the site today. (Baltimore DOT and Mark Reutter) 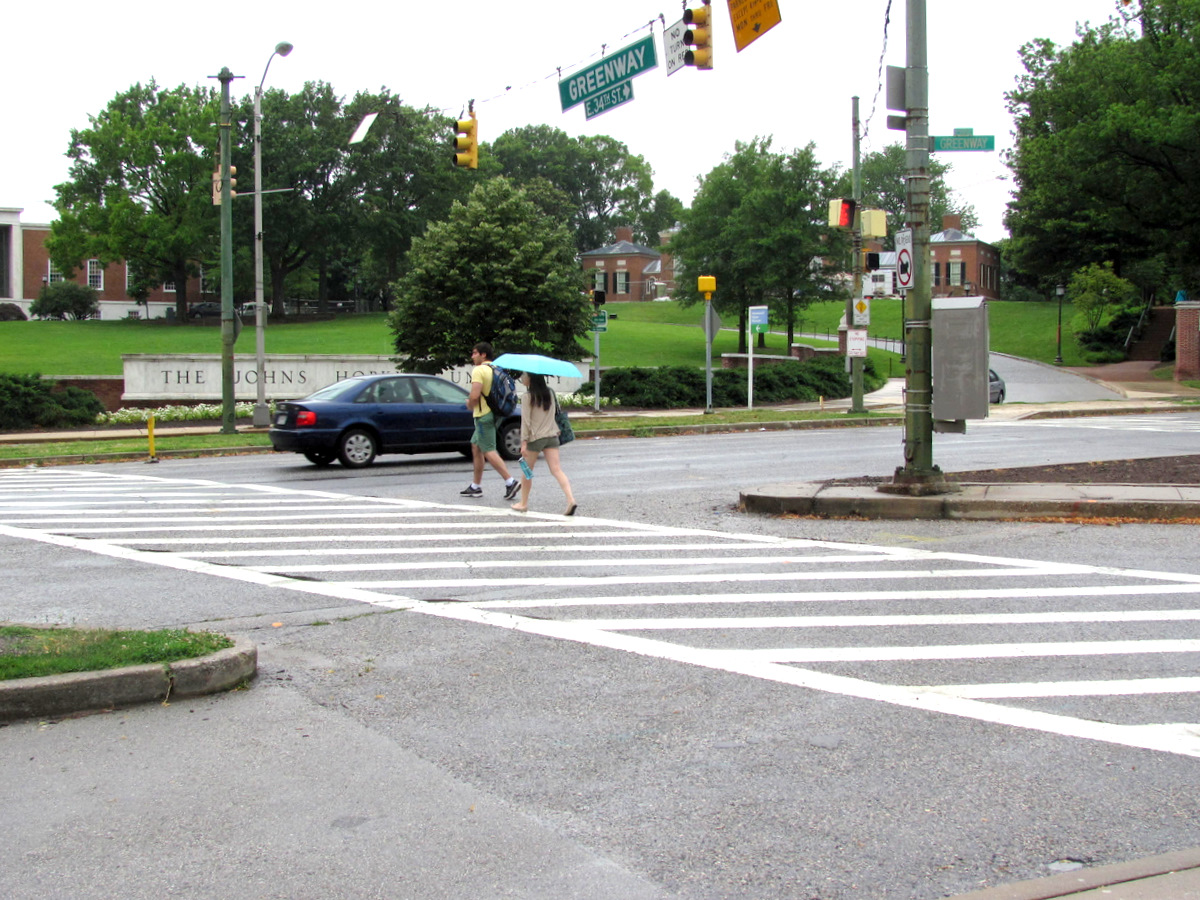 Detours on St. Paul and Calvert

Last week, the Board of Estimates approved a $23.25 million contract to Concrete General Inc. Construction is expected to begin next month and extend through the end of 2014.

Both 28th and 29th street will remain open, as will 33rd. Drivers will also have access to 31st St.

During different phases of the project, pedestrian crossings of Charles St. will be limited.

Years of Planning and Budget Constraints

Planning the reconstruction dates back to 1999. The first design by the city came under criticism by community groups as too car-oriented and without sufficient measures for pedestrian safety, traffic calming and greenspace.

Several concept plans were developed that eventually resulted in the present configuration. But by the time the parties agreed on a plan, the cost estimate of the project had skyrocketed, placing it out of reach for the city (despite 80% of the costs paid by the federal government).

This resulted in yet another plan, which came up with the idea of closing Charles Street completely over the duration of the construction, which is expected to save $6 million and keep the project within the $25 million budget.

Budget restraints following the 2008 recession continued to plague the project. Work was suspended in 2009, only to be reactivated a year later.

Design work by Rummel, Klepper & Kahl and Wallace Robert & Todd was completed last year. A cost overrun of $356,691 was approved by the Board of Estimates in February, bringing the design costs to $2.66 million.

Johns Hopkins has been a partner during the planning process and will contribute $2.5 million toward the project, according to Jamie Kendrick, deputy director of the city Department of Transportation.

The city’s share is $2.5 million for utility work, conduits and new water and sewage lines. 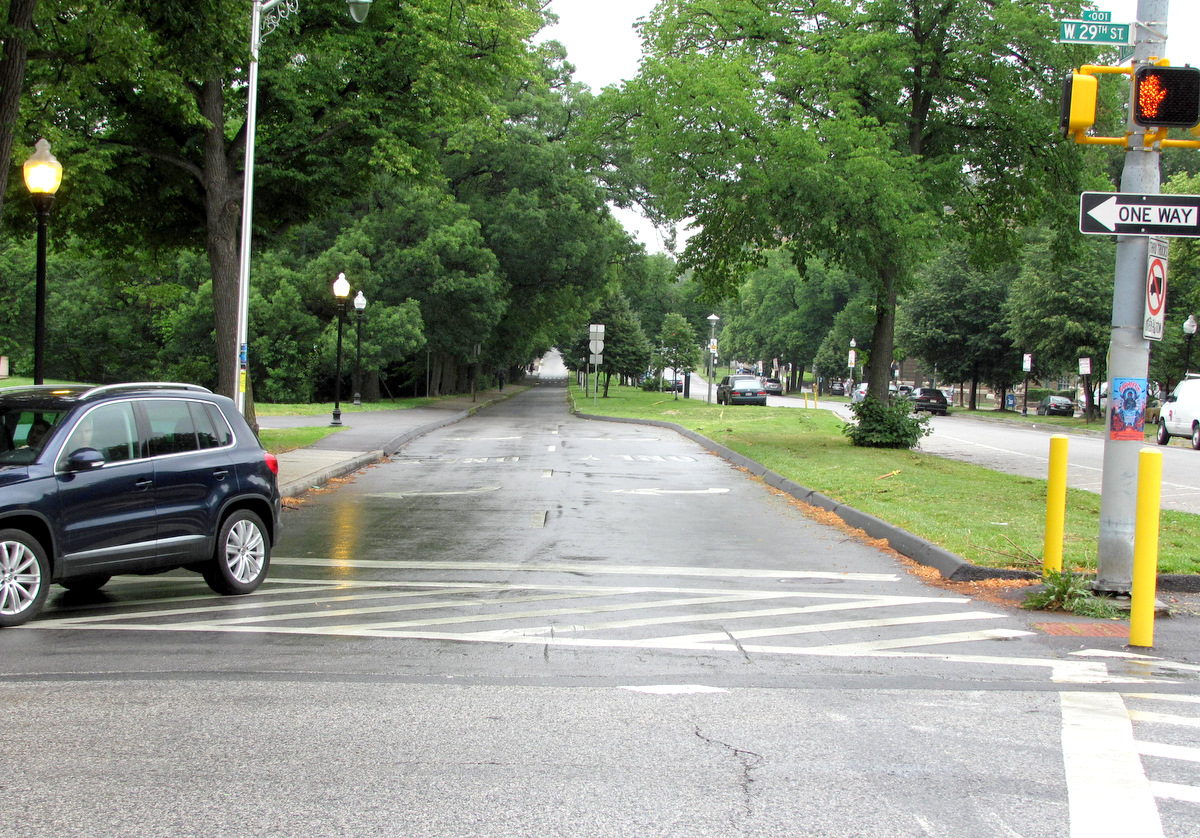 The twin southbound lanes of Charles St., seen here at 29th St., will be extended to University Parkway. The median strip will be shifted over by one lane. (Photo by Mark Reutter)

Awarding of the main contract was also not without controversy. The Board of Estimates deferred action on the award earlier this month following a vigorous protest by P. Flanigan & Sons.

Ward B. Coe III, representing Flanigan, told the board last week that Concrete General was “non-responsive” in its initial bid regarding the contract’s goal of 30% minority participation, but was given another chance to meet the goal by the Maryland State Highway Administration.

Representing Concrete General, which filed “an opposition to the protest” of P. Flanigan, was lawyer Robert Fulton Dashiell, who was not called on by the board.

Kendrick said the city deferred to SHA and its construction chief, Steven Marcisjewski, who negotiated with Concrete General. He said city and state authorities gave the two contractors 60 days “to make their best case.”

The Concrete General contract calls for 32% minority participation. The largest share (18%) was awarded to Stella May Contracting, a Baltimore-based construction services company .