Baltimore police arrested two longtime political activists today and charged them with trespassing after they tried unsuccessfully to deliver a letter – about the closing of recreation centers and fire stations and alleged police abuses – to Mayor Stephanie Rawlings-Blake.

Rev. Cortly “C.D.” Witherspoon, president of the local chapter of the Southern Leadership Conference, and Sharon Black, an organizer with the Baltimore All Peoples Congress, had been leading an afternoon rally of about 75 people outside City Hall.

According to Baltimore photographer and videographer William Hughes, the two were arrested after they refused to leave City Hall:

“I was there for the whole rally, which began at 3 PM at the Shot Tower. Then, they marched to City Hall, past Police H/Q. I saw Sharon and CD, inside the City Hall. They were trying to get permission to go up the Mayor’s Office. They were allowed up to the office and met with a rep. I was back outside by then.” 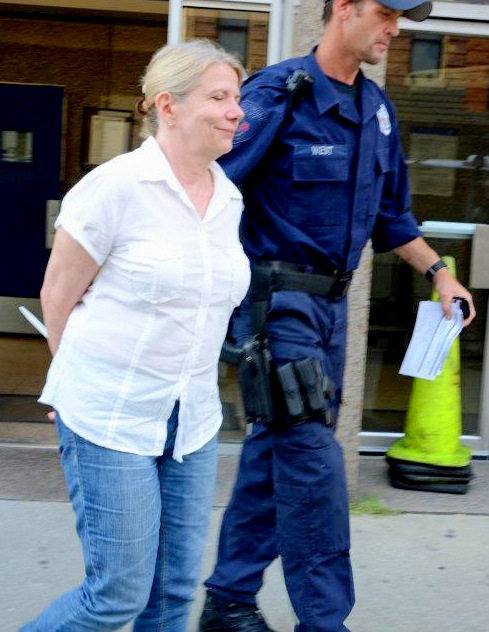 Activist Sharon Black being escorted to Central Booking today after being arrested at City Hall for trespassing. (Photo by William Hughes)

The mayor declined to meet with them and they insisted, according to their phone messages to the crowd outside, on a personal meeting. When they refused to leave, they were arrested.

Organizers have been talking in recent weeks about the letter they planned to send to Rawlings-Blake demanding “an emergency meeting” to talk about police-involved shootings in Baltimore, among other issues.

Among the cases of alleged misconduct they cited today was that of David Yim, a disabled man shot by police in April, and Thomas Threatt, whose beating during an east Baltimore jobs protest was captured on video.