Sharon Black and Rev. Cortly “C.D.” Witherspoon – the two activists arrested at Baltimore City Hall during an Aug. 6 protest about jobs, police brutality and recreation center closings – declined a plea deal today and were given an Oct. 4 court date.

Appearing in District Court along with their attorney, J. Wyndal Gordon, Black and Witherspoon were offered the chance to be sentenced to community service in return for pleading guilty to trespassing charges. They’re now scheduled to be tried in District Court at 700 E. Patapsco Avenue.

“We are not going to accept that. It’s a matter of principle,” Witherspoon said. “City Hall is the people’s house.”

Witherspoon, who heads the Baltimore chapter of the Southern Christian Leadership Conference, and Black, of the local All People’s Congress, had been arrested after they had participated in picketing by about 75 people outside City Hall.

The two had entered City Hall planning, they said today, to deliver a letter to Mayor Stephanie Rawlings-Blake and schedule a meeting with her.

City police have said the two were arrested because they refused to leave after City Hall “closes to the public at 6 p.m.”

“We were performing community service that day,” Witherspoon observed, outside the courtroom.

Before Black and Witherspoon entered the courthouse on E. North Ave., about 20 of their supporters held a demonstration on the sidewalk, carrying signs that said “Jobs and Recreation Centers, Now!” and “Stop Police Terror.”

Allied via the coalition group “Baltimore People’s Assembly,” the two have been leading efforts to call attention to police-involved shootings and alleged police brutality in Baltimore. 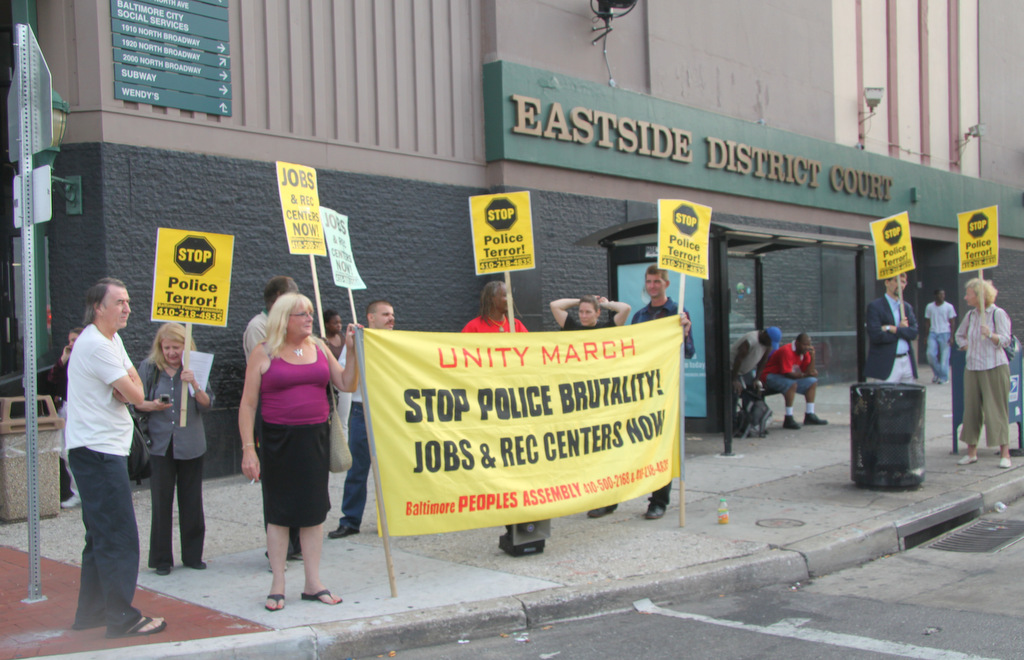 Demonstratpors protested outside District Court in Baltimore about police brutality and the arrest of Sharon Black and Cortly Witherspoon. (Photo by Fern Shen)

They have been citing cases such as that of David Yim, a disabled man shot by police in April, and Thomas Threatt, whose beating during an east Baltimore jobs protest in March was captured on video.

(All the charges against Threatt – resisting arrest, disorderly conduct and failure to obey a police officer – were dropped earlier this week.)

Yim, who had apparently been unarmed when a police officer shot him through the passenger side window of his car, is disabled.

On Saturday, a 63-year-old homeless veteran, was shot and killed by police on West Lexington.

Police have said Rudolph Bell had attacked the officer with a knife or bottle. Critics say the latest incident underscores a serious problem of police misconduct, especially in regards to the mentally ill.

Black said it seems as though “that’s the answer for any kind of mental illness – killing people and beating them up.”