Dubbing its offer as a “Rare Opportunity to Purchase and Operate a Steel Mill,” the Chicago-based company said it will entertain bids for “one or more independent steel production lines” as well as “the entire Sparrows Point mill.”

Bidders can operate the production lines at Sparrows Point, but they can also buy – and remove – the equipment through a components auction.

“Buyers are not precluded from buying one or more independent steel production lines, including their components, and removing them from Sparrows Point.”

Hilco called on interested parties to submit an “initial indication of interest” by November 12, and set December 21, 2012 as the bid deadline.

The Brew strongly suggests that former employees – as well as connoisseurs of the decline and collapse of the once-largest steel mill in the world – not confuse today’s announcement with a return to pre-bankruptcy steel production. 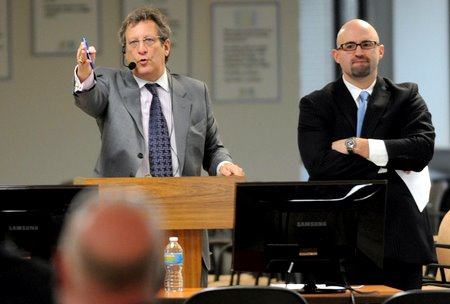 Hilco still has months of inventory, planning and site remediation to complete before it can even begin the wholesale scrapping of Sparrows Point’s facilities.

An offer to sell some of the property would not interfere with this work, while give the liquidator – and the United Steelworkers union (USW), which currently represents 1,600 mill workers without jobs – a fig leaf to say that the final determiners of the mill’s fate are “market forces.”

Unless an industry that is currently awash in excess capacity and low steel prices makes a miraculous recovery, a potential start-up of Sparrows Point would be highly risky as well as expensive.

The global steel business has known that Sparrows Point was being peddled by RG Steel for months before the company filed for bankruptcy protection last May 31.

In fact, Sea Port Group Securities LLC and other consultants were being paid more than $400,000 a month prior to the bankruptcy filing to try to off-load the mill, which was losing between $500,000 and $1 million a day.

Then during the summer-long bankruptcy process, no steel company made a final bid for the plant, even though several firms, notably Mexico’s AHMSA and Brazil’s CSN, placed offers for the property.

The Brew’s review of recently-released bankruptcy court records shows that on July 25 and again on July 28, bids for Sparrows Point by AHMSA (Altos Hornos de Mexico) were privately reviewed by Sea Port and RG management.

Neither the Mexican offer – nor one by CSN – was considered acceptable as a “stalking horse,” or preferred bidder, and Hilco went on to win the auction by offering $72 million for the mill.

In its website offering, Hilco does not include the “L” blast furnace as an individual part of the potential sale of the “hot side” of the mill. This omission is striking given that, without its operation, the “entire mill” could not be operated.

L produces the molten iron that is the first basic step toward making steel in the BOF (basic oxygen furnaces) and producing slabs on the continuous casters – both of which are offered as equipment for a potential operator.

(A reader points out that Hilco appears to combine the L furnace with the sinter plant.)

Another oddity  is that Hilco’s offer precludes the sale of the land upon which the mill sits.

The 3,400-acre peninsula is now owned by Hilco’s partner, ELT, which says it will keep the land but provide “an indemnification for all past environmental liabilities at the site.”

That’s a tall order given the environmental issues at the mill, including a still-unsatisfied 1997 consent decree signed by former owner Bethlehem Steel with the Environmental Protection Agency (EPA) and Maryland Department of the Environment.