Over the past five years photographer and artist Amy Davis has explored decrepit buildings, dug through archives and staked out Baltimore street corners, all in search of elusive images of the city’s cinematic past.

“I feel a little like an archeologist without actually having to dig in the earth,” she says.

The award-winning Baltimore Sun photojournalist is working on a photo book documenting the city’s movie theaters, some of them eccentric, tiny spaces shoehorned into neighborhood shopping centers, others grand palaces that once graced the city’s bustling downtown.

Only a handful of the roughly 50 theaters she’s focused on still show films. Most others have been rebuilt, over the years, into churches, shops, offices and parking lots, or just bulldozed, reflecting not only changes in Hollywood and the entertainment industry but Baltimore’s own transformation, in a few generations, from a thriving blue-collar metropolis to a city in search of an identity. 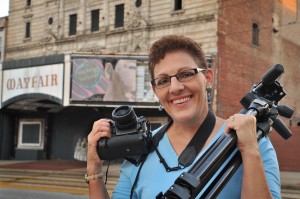 Like Baltimore itself, “Flickering Treasures: Rediscovering Baltimore’s Forgotten Movie Theaters,” is still a work in progress, as Davis tries to raise the $45,000 she’ll need for publication of the book, planned for the fall of 2014.

She’s hoping, by the end of the year, to raise enough money to meet a $10,000 matching grant. Details are available on the project’s Facebook page, or from Davis, who can be reached at flickeringtreasures@yahoo.com.

Baltimore is so in love with its past, it sometimes seems like the Norma Desmond of urban America. (“You used to be big,” a callous reporter tells Desmond, the faded movie queen in “Sunset Boulevard.” “I am big,” she replies. “It’s the pictures that got small.”)

But Davis says she is aiming to go beyond sepia-toned nostalgia for Baltimore as it used to be. She’s trying to make portraits of the city’s movie houses that that stand on their own as fine art, and juxtapose them with archival photos that help explain the important role these dream palaces once played in the life of Baltimoreans.

“I like to think of this as the story of Baltimore as seen through the architectural and cultural prism of its theaters,” she says.

Davis, 56 and a graduate of the The Cooper Union for the Advancement of Science and Art in New York, said she first started thinking about the city’s historic movie theaters in 2007, when her neighborhood’s theater, The Senator on York Road, faced foreclosure. Today, after a bitter battle over its future, the historic single-screen Senator is being renovated and turned into a multi-screen theater. 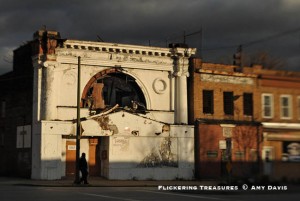 The Fulton, a 1915 movie theater on N. Fulton Avenue, became a food market and church before it was abandoned after a fire destroyed the interior in 2007. (Photo by Amy Davis)

She later drove past The Town on Fayette Street, and realized that the city was filled with old theaters, many of them striking architectural monuments.

The Town represents a rare victory for preservation. The city’s Everyman Theater theater group has renovated the building, which has become part of efforts to revive Baltimore’s former city center.

“It was that theater that made me realize that I had to do this book,” Davis said.

Inspirations for John and Barry

To help tell the story behind her photographs, Davis has interviewed loyal patrons of the city’s movie palaces, including two of the city’s best-known directors. John Waters, who discusses one of his favorite theaters, The Earle, a now-closed adult theater on Belair Road, and Barry Levinson, who used to take dates to The Crest on Reisterstown Road.

The Crest, which is no longer a theater, stood across the street from the Hilltop Diner, celebrated in Levinson’s 1982 film “Diner,” where he would wind up if a movie date didn’t live up to expectations.

Davis is looking for more of these personal recollections to enrich her architectural photos. “What I really would like is for someone to read your article and say, ‘Oh, I have a great story about that theater,” she says.

During her work on the book, she says she was impressed with what a “lively, gleaming city” Baltimore was in archival photos of old theaters. A number of the city’s former movie houses have been reborn as cultural and entertainment centers, including The Patterson, The Town and The Broadway in Fells Point, which is now the Latin Palace, which houses a restaurant, night club and meeting rooms.

For the most part, though, her contemporary portraits capture decades of neglect.

There is the eerie interior of the long-vacant Parkway Theater on North Avenue, now awaiting renovation; the rundown façade of the crumbling Mayfair on Howard Street; the melancholy shell of The Fulton Theater and many others.

While she realizes that by itself a book of photographs can’t fix what ails city neighborhoods, Davis says she hopes to inspire more support for the preservation and reuse of old theaters, in hopes more can once again become anchors for community life.

“We need to revive not just the theaters, but the neighborhoods filled with liquor stores and bail bondsmen that surround them.”