It’s called “survival sex” and it’s one of the many risky practices and degrading experiences endured by homeless youth – a desperately under-served population in Baltimore.

“You’re lost and you don’t know where to go,” explains Shawn Toyer, now 28, who was out on the streets as a teenager. “Or who to trust. Or how to stay afloat.

“It’s out on the streets that you learn very soon that nothing’s for free,” he solemnly adds. That includes prostitution.

On any given day, at least 640 young people between the ages of 14 and 25 are homeless and on their own, according to a 2011 census conducted by the Johns Hopkins Bloomberg School of Public Health.

According to a survey by the National Runaway Switchboard, 1 out of 3 runaways are forced to engage in survival sex in order to meet their basic needs within 72 hours of hitting the streets.

Given that homeless youth and runaways comprise about 15% of Baltimore’s estimated 4,100 homeless, advocates note, there is a surprising dearth of  public resources available for them.

For example, there are 815 shelter beds (private and public) for homeless adult men and women, and an additional 187 beds for women with young children.

For unaccompanied homeless youth under 18, there are a grand total of 15 beds.

Barred from the adult shelters, homeless under 18 have the option of the eight-bed Loving Arms shelter in Northwest Baltimore or a seven-bed shelter on Rose St. in East Baltimore.

When conditions become desperate – such as during this week’s subfreezing weather – kids on the street resort to desperate measures, including  stealing, feigning illness or trading sex for adult protection.

“I had to pose as an alcoholic to get into the homeless shelter,” said Luther Thompson, 24, of his homeless days.

To try to break this vicious cycle of despair and often self-destructive behavior, Thompson and Toyer have become active as peer counselors in the first homeless youth “drop-in” center, which has opened at 2315 North Charles St.

The center was established by Youth Empowered Society (YES), a group of “youth leaders” with direct experience of homelessness. 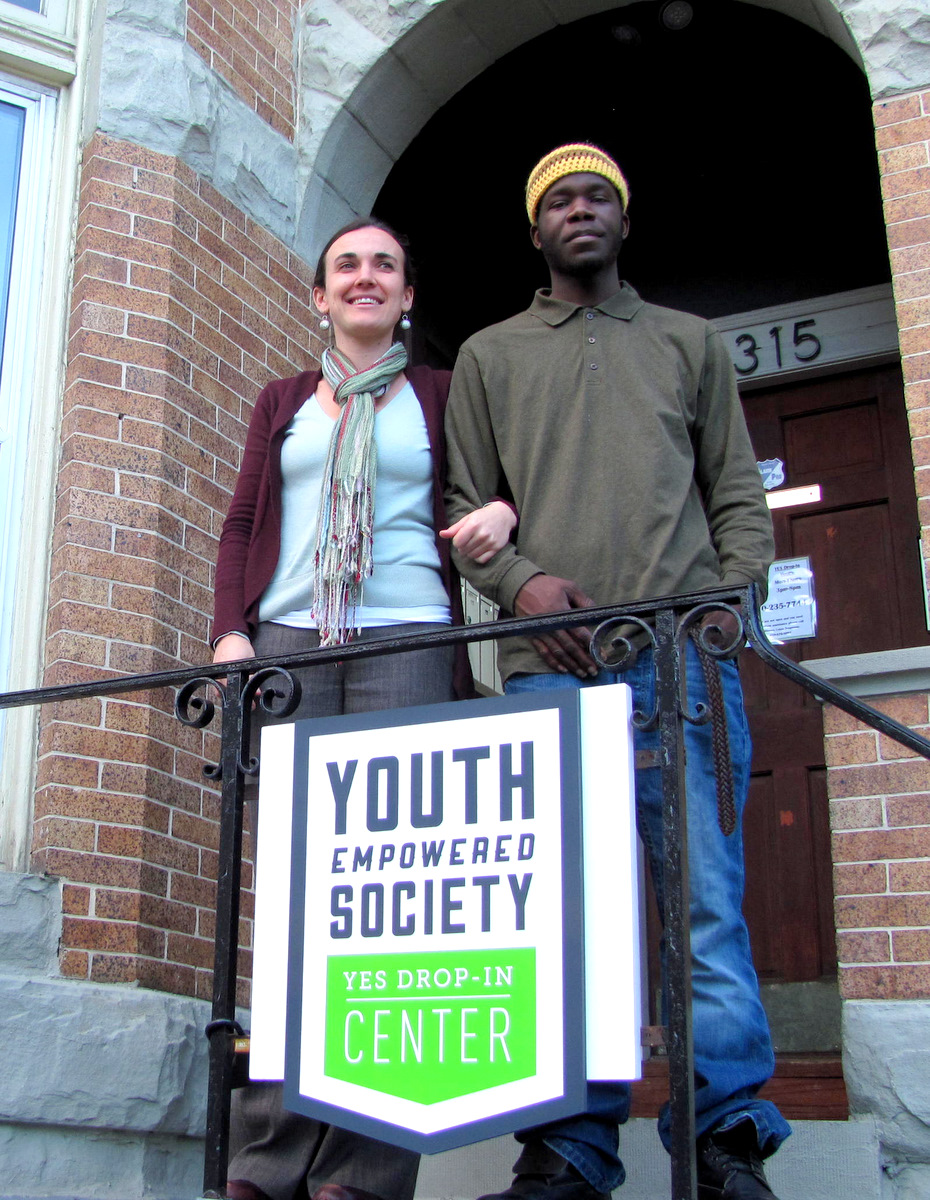 The group identified a comprehensive, one-stop center for homeless teens as the greatest need for the population. Last year, YES and Fusion Partnership received a $105,000 federal grant to set up the center to provide clothing, food, laundry services and free transportation for youth without permanent homes.

The center does not provide overnight shelter, but assigns peer counselors to those walking through the door. The counselors explain what resources are available to find transitional housing or a job, and how to apply for such basic items as a birth certificate.

Most importantly, according to Toyer, the counselors provide a ready ear. “Our vision is to break the chain of dependency and abuse by empowering youth not just to get back on their feet, but to learn how to reach beyond.”

The reasons for homelessness vary widely. Some kids are ostracized by their families because they are gay, lesbian or undergoing a sex change. Others are pregnant. Still others are kicked out because of substance abuse.

But family instability is at the root of much homelessness.

Parents suffer from drug addiction or are arrested and go to jail. Teenagers fight with their step-parents or other relatives. Many are fleeing physical or sexual abuse. Or children are in foster homes, where they never felt wanted, and are encouraged to leave as soon as they turn 18.

“Too Many Think This is all They Have”

“No one plans to be homeless,” she says bluntly. As a peer counselor at the YES Center, she tries to build up confidence and encourage a client to think about the future.

“We want to teach them how to fish, how to see a way out of this. Too many [homeless] think this is all they have,” she said.

According to YES director Lara Law, the drop-in center welcomes donations from the public, including non-perishable, high-protein snacks and food.

The center also gladly accepts volunteers of all ages and cash donations to further its activities, which include plans for a permanent youth shelter on the premises.

The new facility operates between 3 p.m. and 8 p.m. Monday through Thursday and by appointment on Fridays.