With eviction looming for a group of homeless people living next to the Jones Falls Expressway, Councilwoman Mary Pat Clarke yesterday introduced a resolution calling on the city to either extend the Friday deadline or give the people remaining there temporary transitional housing.

Clarke noted that the residents of the camp have vouchers for housing and that advocates and homeless services workers have been trying to get them placed, but “for some reason” the administration of Mayor Stephanie Rawlings-Blake is moving quickly to shut down the encampment under I-83.

“The recommendation is that we stay the course until all these residents have completed their applications and are awarded vouchers . . . and then finally move in,” Clarke said.

“We are within reach of a win-win situation everyone can be proud of.”

A standing-room-only crowd of supporters of the residents of “Camp 83” came to watch the proceedings, after a demonstration by about a dozen people in front of City Hall, calling on the city to find them permanent housing .

“City Council: Vote for Housing, not Eviction,” said a sign. “This is not a home,” read the message scrawled on the side of cardboard box, placed on the ground in front of City Hall.

For the past five years, though, more than a dozen people have been living in tents and other shelters on this patch of land in between the highway and the Fallsway.

City officials say they want to raze the camp because of concern for the occupants’ health and safety and that they have been working to find them other housing. They say there has been drug and alcohol use there and open fires, as well as incidents of domestic violence and that they have already pushed back the deadline once.

“Outreach workers have made over 100 visits to this site in the past year. Throughout this time, they have been connecting unsheltered people living there with housing and services,” Olivia D. Farrow, director of the Mayor’s Office of Human Services, wrote in a statement to the various stakeholders last month.

“No sleeping, camping or storage of belongings is permitted in this area. Any property remaining in this area will be removed or discarded at 8:00 a.m. March 8, 2013,” the signs posted there read.

Camp dwellers say they do not consider emergency shelters as safe or secure as Camp 83 and want more time to find other shelter.

Clarke announced a public hearing on the Camp 83 issue on Thursday at 1pm at City Hall, timing that drew a ripple of disapproval from advocates who had hoped to win a reprieve for the camp-dwellers yesterday. (She acknowledged after the meeting that she didn’t have the necessary votes to pass the resolution.)

Clarke also noted that the city’s 10-year plan to end homelessness, “The Journey Home,” has reached the five-year mark. She also said the Council needs to have a hearing on this overall plan as well. 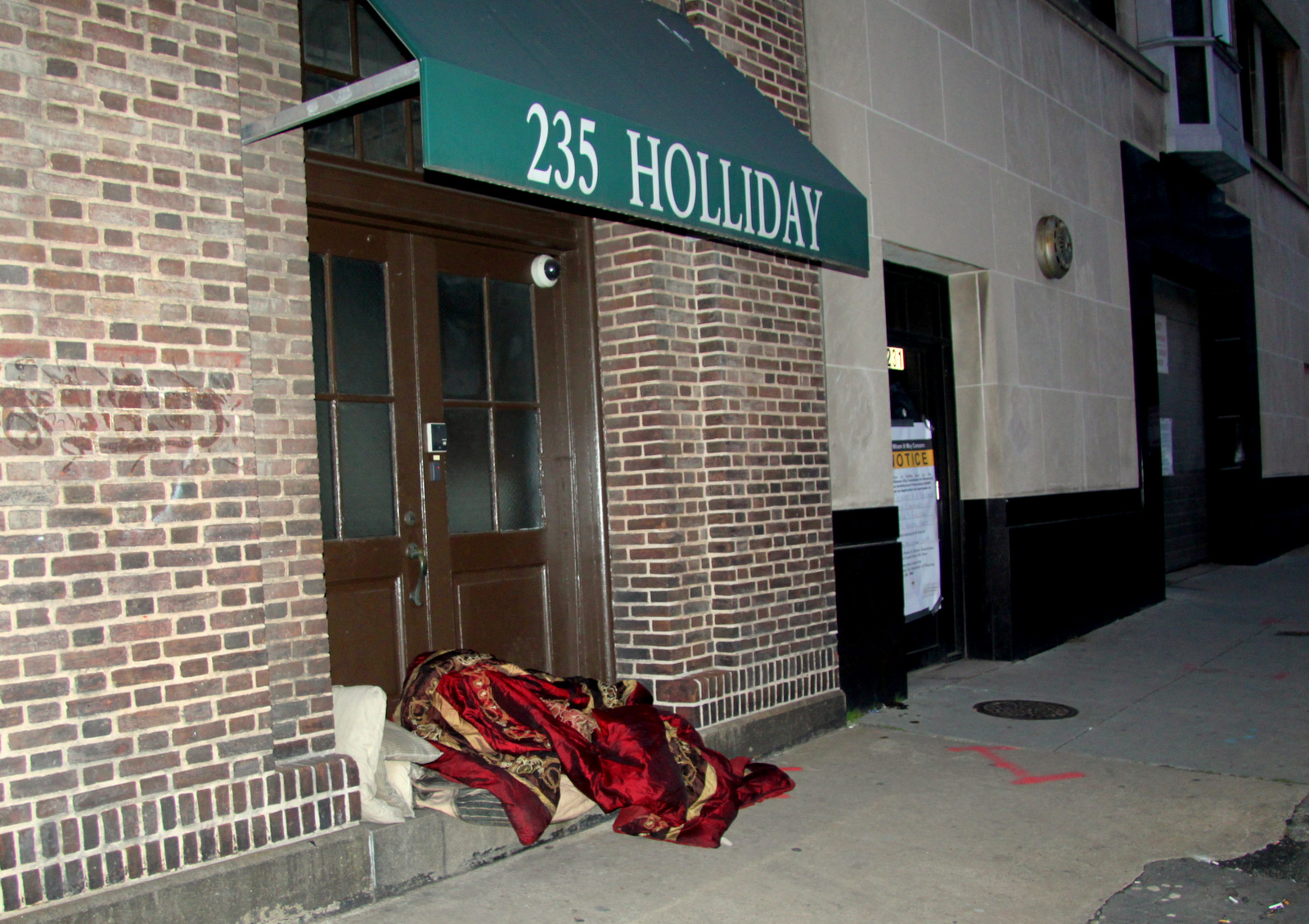 Someone sleeping in a doorway, a block from City Hall, after the Council meeting adjourned last night. (Photo by Fern Shen)

“Revisions [to the plan] have been discussed everywhere but in this chamber,” she said.

Outside of City Hall last night, the scattering of people sleeping, singly or in clusters, in doorways and up against cement walls under the JFX was a testament to the continuing problem.

At 6:45 p.m., the person sleeping in a doorway under a blanket on Holliday Street, a block from City Hall across from the Abel Wolman Municipal Building, did not have a name for his “encampment.”

Here’s a video interview (made after the meeting by supporters of the “Camp 83” residents) in which Clarke elaborates on what she thinks should happen now. She urges activists to attend the 1 pm public hearing in City Hall Thursday, if it isn’t canceled due to the snow.