There were some testy moments last night at a hearing on zoning code revisions that would phase out Baltimore liquor stores which have been allowed to operate out of code compliance for four decades.

A crowd of about 100 at the War Memorial Building included community members who have been pushing hard for the change (saying the stores make their neighborhoods less safe and less healthy) along with store owners who say they are just the opposite – a force for community good.

Jay Chung, whose family owns the Charles Village Schnapp Shop, said the crackdown is unfair and that the city solicitor’s office had previously referred to the non-conforming stores as “grandfathered in,” but now is saying they are “conditional.” 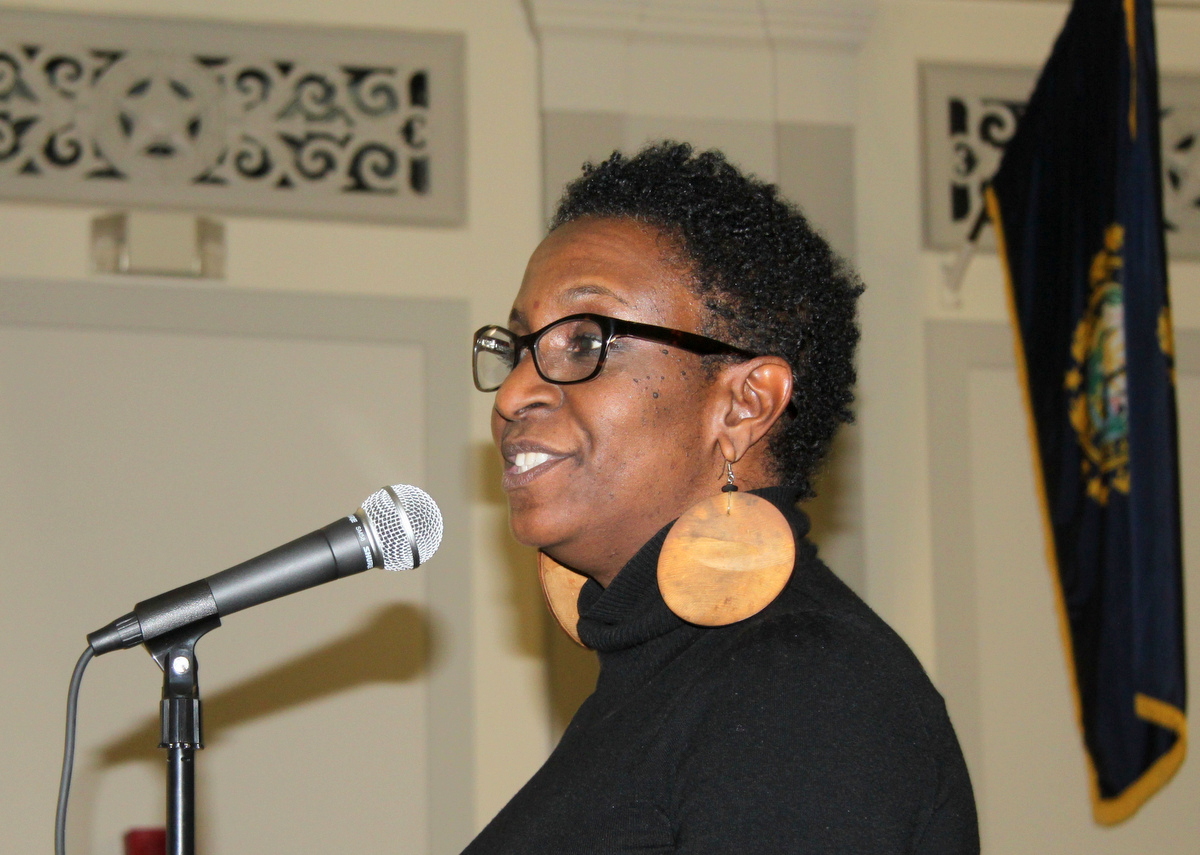 “Now the city solicitor’s office is saying we should have researched and known we were at risk of having the rug pulled out from under us,” Chung said at the Planning Commission hearing.

Chung said the loss of their license would essentially wipe out family members’ life savings (“These are our 401(k)’s.”) and summed up his accusations against City Solicitor George Nilson in stark terms: “I’m calling him a liar.”

Nilson replied that the stores were always known to have a “precarious status” and joked that “I’m a grandfather – I’m not going to last forever.”

“I don’t see a legal implication to the term ‘grandfather,’” he said, “whether or not we used it on various occasions in the past.”

The liquor establishment crackdown is part of the sweeping change proposed in the city’s update of its zoning code, last revised in 1971.

Mayor Stephanie Rawlings-Blake supports efforts to use the code rewrite to reduce the density of stores that sell alcohol, a strategy city Health Commissioner Oxiris Barbot framed last night as a public health issue. She said research shows there are higher rates of violent crime in areas with higher densities of establishments selling alcohol.

One target of the code change are liquor stores that don’t conform to zoning codes, typically because they are located in the middle of a residential block. These 105 stores would be phased out over four years.

The city is also proposing to tighten the definition of what constitutes a tavern. If the changes go through, qualifying taverns would have to make at least 50 percent of their daily revenue from on-premises consumption. More than half their floor space would have to go toward consumption as well. 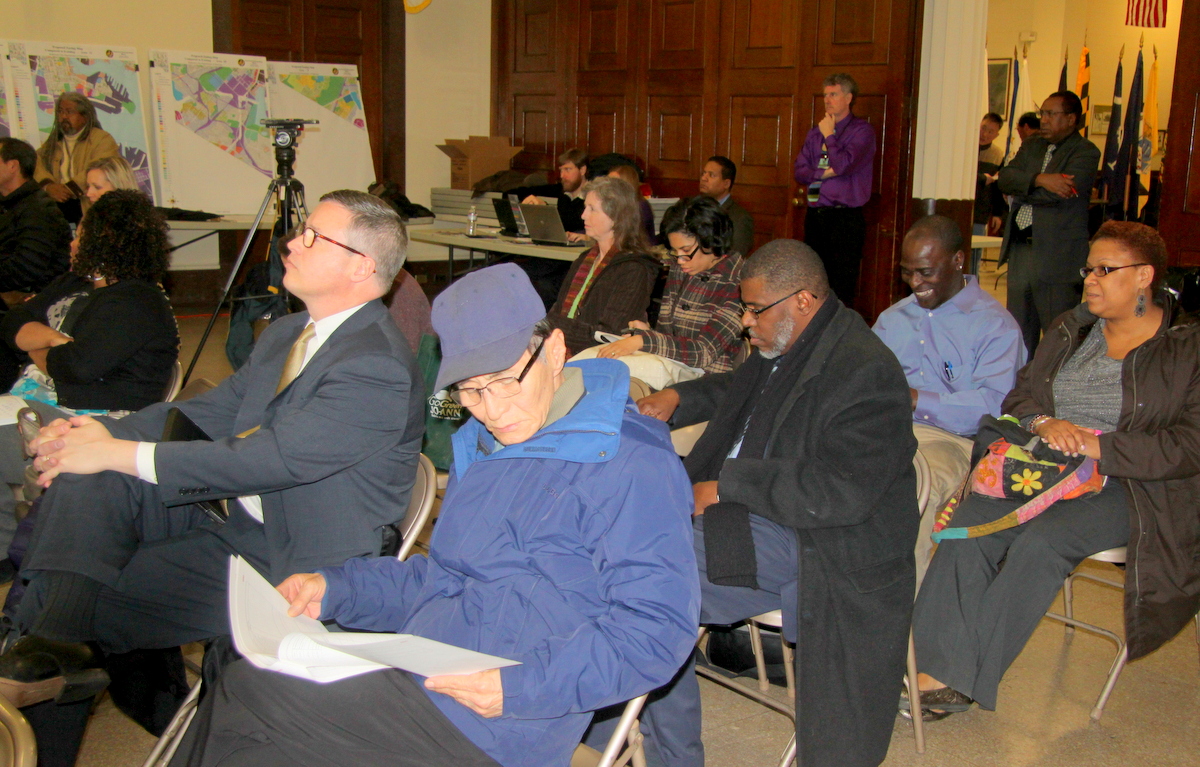 Liquor outlet owners and their attorneys, as well as supporters of the crackdown, jammed the War Memorial Building for the hearing. (Photo by Fern Shen)

Nilson said the kind of establishment they are targeting is one in which “the tavern part is a sham – it’s located in the back of the building behind the cleaning closet. The chairs have three legs.”

Such taverns located in commercial districts would have four years to meet the new code requirements, while those located in residential areas would have only two years, Nilson said.

Michelle Ha, owner of Kay’s Liquor and Convenience, in the 2400 block of Biddle Street, said yesterday that the Korean-American Grocers & Licensed Beverage Association of Maryland Inc., known as KAGRO, is “definitely” considering litigation.

We expect legal challenges, Nilson said, but “we will prevail.”

If the city does successfully shut down many liquor-selling establishments, community members like Monalisa Diallo will be cheering them on.

A member of the Park Heights Community Health Alliance, Diallo called the stores “predatory.” She described a store on Park Heights Avenue with a single entrance, where patrons must be buzzed in to find “malt liquor, shorties, candy cigarettes and cigarellos under the same roof with corn flakes and Oodles of Noodles.” 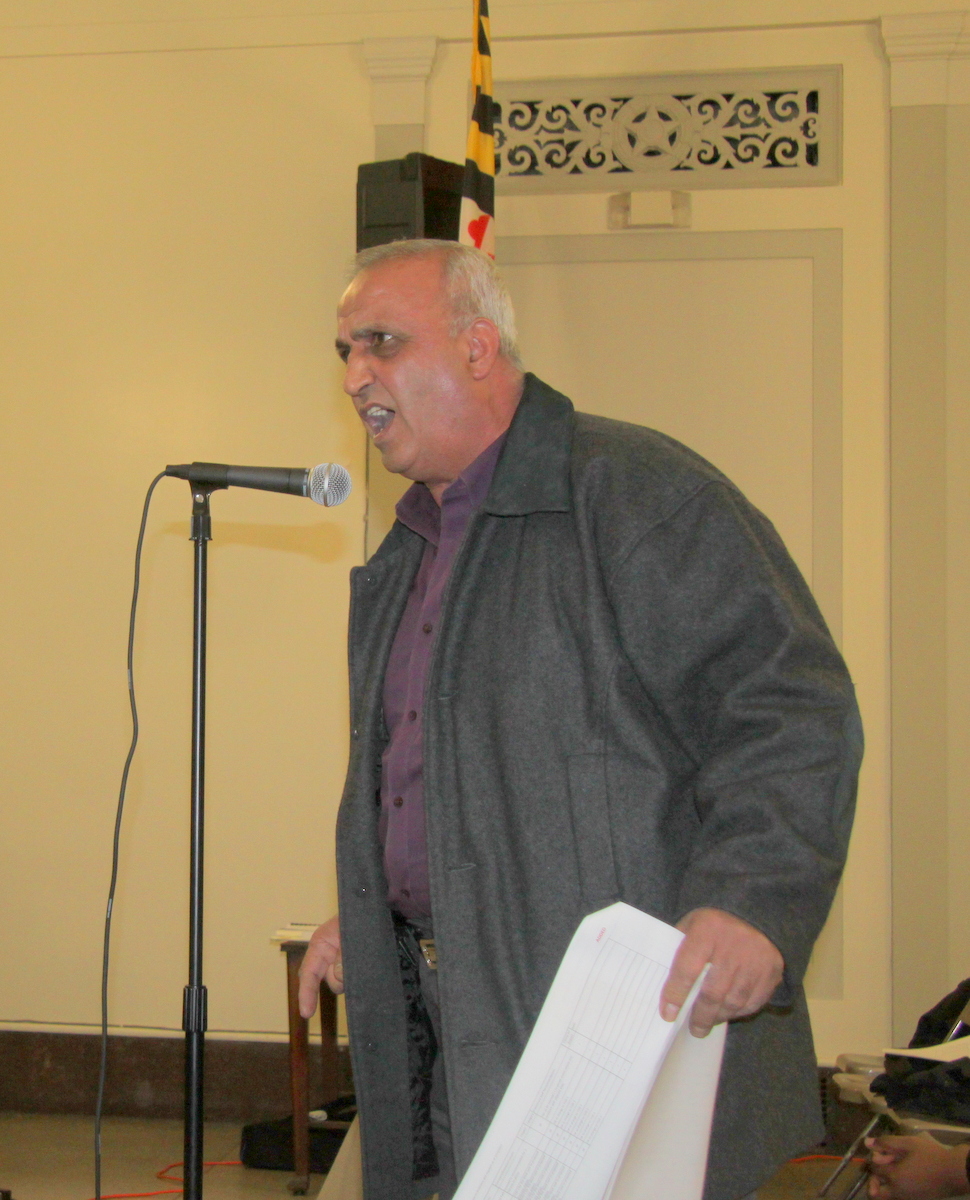 “Pay me or leave me alone!” said Mohammed Abukhdeir, owner of a non-conforming store at 2300 Fleet Street. (Photo by Fern Shen)

“We’re asking that Baltimore finally makes the turn and looks at issues of liquor and drugs for real and not just because some owners are going to lose money,” she said. “We’re talking about lives that will be lost.”

Derrick Compton, of Park Heights, echoed that theme, describing “a young man that died in one of those liquor stores,” and the many instances where he said such stores have sold liquor to underage customers.

Indeed, Kay’s Liquors owner Ha was emphatic in her claims about what she has done to help the East Baltimore neighborhood where she operated her store for 14 years.

Tired of the drug dealers who loitered at a nearby bus stop, she lobbied to have it removed, she said. When the pipes burst at a nearby house, she said, she called 311. When school starts, she works with other merchants to buy school supplies for local kids. When criminals are plaguing the neighborhood, she said, she bypasses 911 and calls the Eastern District police commander directly on his cell.

One neighbor, Louise Murphy, spoke last night in support of Ha, saying she was “an asset to the community.”

“Why would anybody target Kay’s?” Murphy said. “The bar across the street is where the trouble is.”