If anything could recapture this prominent corner site from the Abominable Glow Man fronting Penn Station (aka the 51-foot tall Male/Female sculpture), it is the University of Baltimore’s new John and Frances Angelos Law Center.

It is the city’s best new education building since Tod Williams and Billy Tsien’s Mattin Student Art Center for the Johns Hopkins University (2001). “I call it checkerboard square,” said Baltimore architect Walter Schamu, “but you’re looking at the future of architecture.”

Indeed, the glass-sheathed assemblage of interlocking blocks that has been rising up at the corner of Mount Royal Avenue and Charles Street was designed by the currently white-hot group Behnisch Architekten, headquartered in Stuttgart, Germany, with offices in Boston.

Behnisch won a 2008 design competition for the building that drew such heavy hitters as Norman Foster and Moshe Safdie. Baltimore architects Ayers, Saint, Gross, master planners for the University of Baltimore campus, are their partners in the project.

The 12-story structure they came up with (scheduled for a grand opening ceremony on April 30) succeeds esthetically, programmatically, and what is increasingly important in any new building nowadays, environmentally. It is named after the parents of major donor (and law school alum), Orioles owner Peter G. Angelos.

Designing for a Cramped Spot

The one-acre site is a roughly triangular plot of land left over from the construction of the Jones Falls Expressway, which borders it on the north and east sides. The other boundaries are heavily-trafficked Charles and Mount Royal. 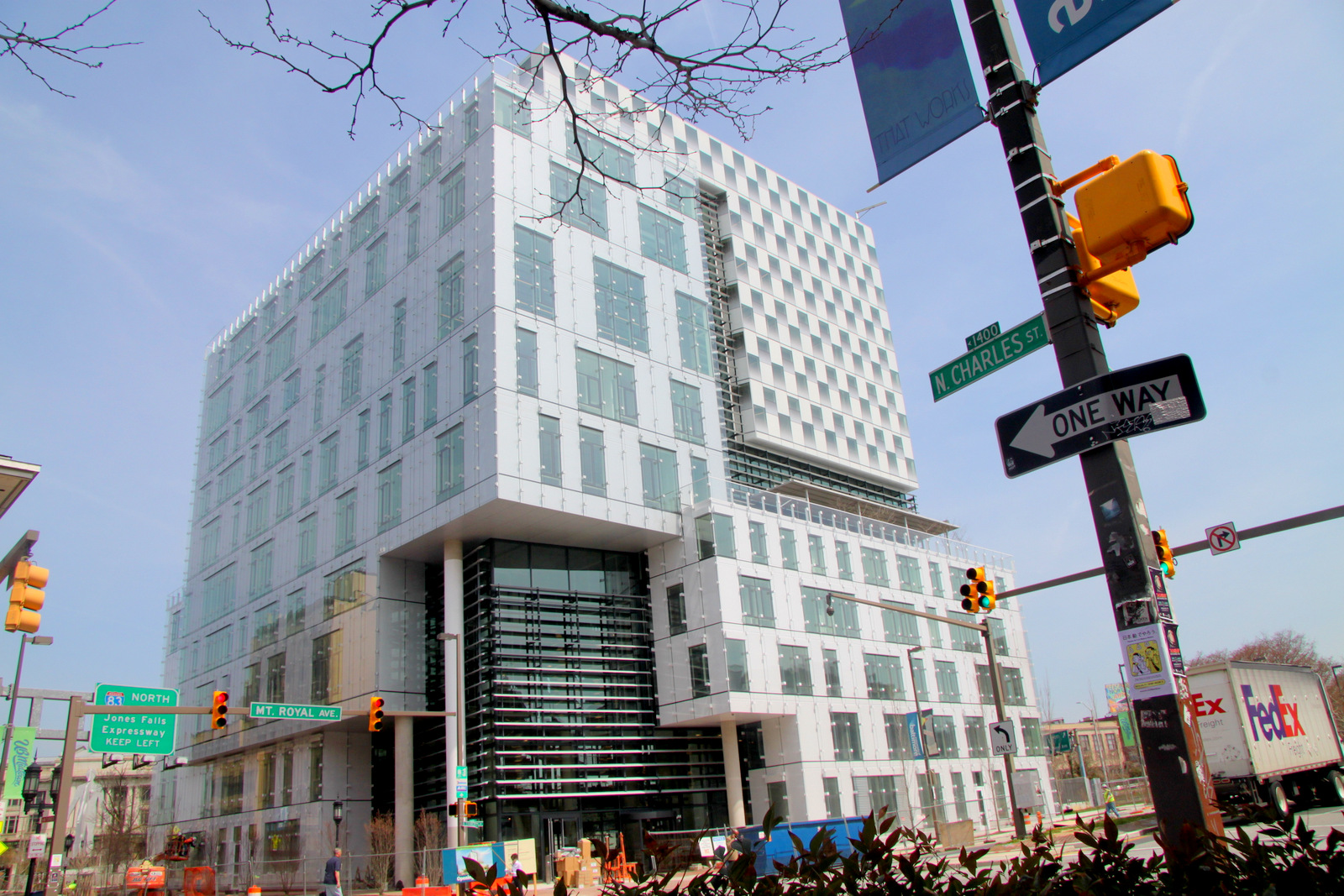 The new Angelos building is tucked into a small site at the University of Baltimore’s midtown campus. (Fern Shen)

The architects made the most of this difficult, noisy site. They placed the well-marked entrance facing the intersection in a recessed, five-story opening, and screened the expressway in the rear with a patterned concrete wall that incorporates a “water feature.”

A stairway connects the enclosed terrace with Charles Street. Whether this below-grade area becomes a place to linger remains to be seen, but it hard to imagine a better solution to what would otherwise have been wasted space in the back of the building.

The Law Center’s form and facade, which evolved during the design process, reflect a similarly creative approach. What in lesser hands might have been a bland, grid-like Rubik’s Cube is instead a Chinese burr puzzle made up of inter-connecting parts.

The three main components are clearly marked on the building’s exterior – they project and recede and present varying fenestration. Facing the entrance, the block on the lower right houses law clinics and other programs.

On its roof is an outdoor terrace. Rising above it is the five-floor law library (with the checkerboard windows). 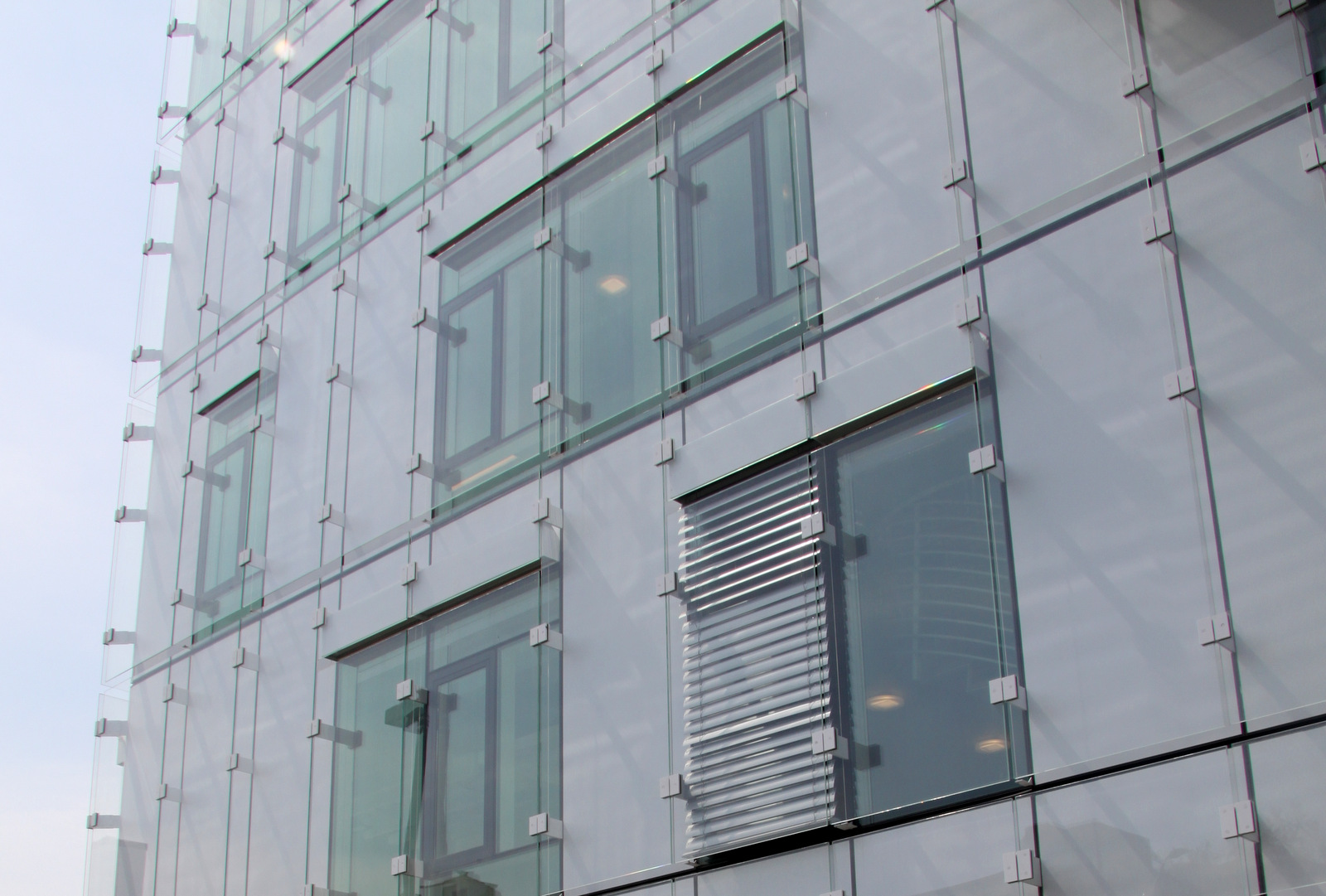 East-facing facade, with one of the interior shades down. (Fern Shen)

The library overhangs the third block, which is cantilevered above the entrance and extends north on Charles Street. It contains alternate floors of classrooms and faculty and administrative offices.

The building is faced with glass and metal panels. Three sides (except the north) actually consist of a double facade: a “rain screen” of half-inch glass panels that extends about ten inches beyond the primary wall. The purpose of this double skin has to do with interior climate control. There are four outdoor landscaped terraces shaded by metal canopies and sunscreens.

Behnisch Architekten claims to design its buildings “from the inside out.” Matt Noblett, the partner-in-charge in the Boston office, said, “It was a diverse program – classrooms, offices, legal clinics, library – that needed to function well within an integrated environment. The goal was to offer the opportunity to meet casually.”

Providing light and transparency, accessibility, openness, and green architecture to benefit the environment were other primary aims. 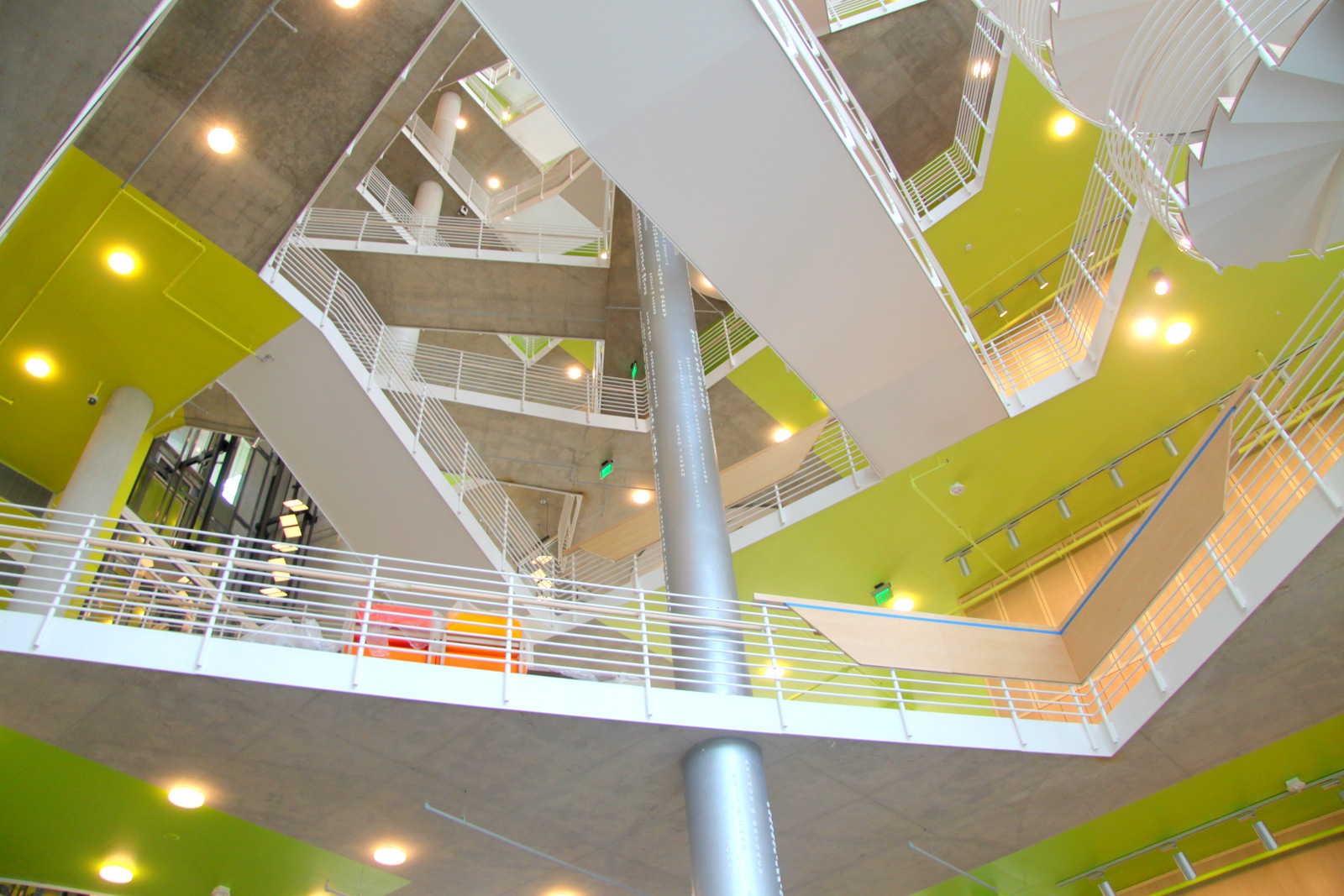 The law center anticipates receiving a rare platinum LEED designation from the U.S. Green Building Council. Design features ranging from the building’s green infrastructure to its four showers (promoting walking, running or biking) are meant to contribute to the designation.

The interior is organized around the central lobby and atrium. There are four elevators (two of them Hyatt-style glass boxes allowing views to the outside and inside of the building) and a complex array of stairway systems, including spirals and ramps. They rise through twelve floors of the reinforced concrete structure. 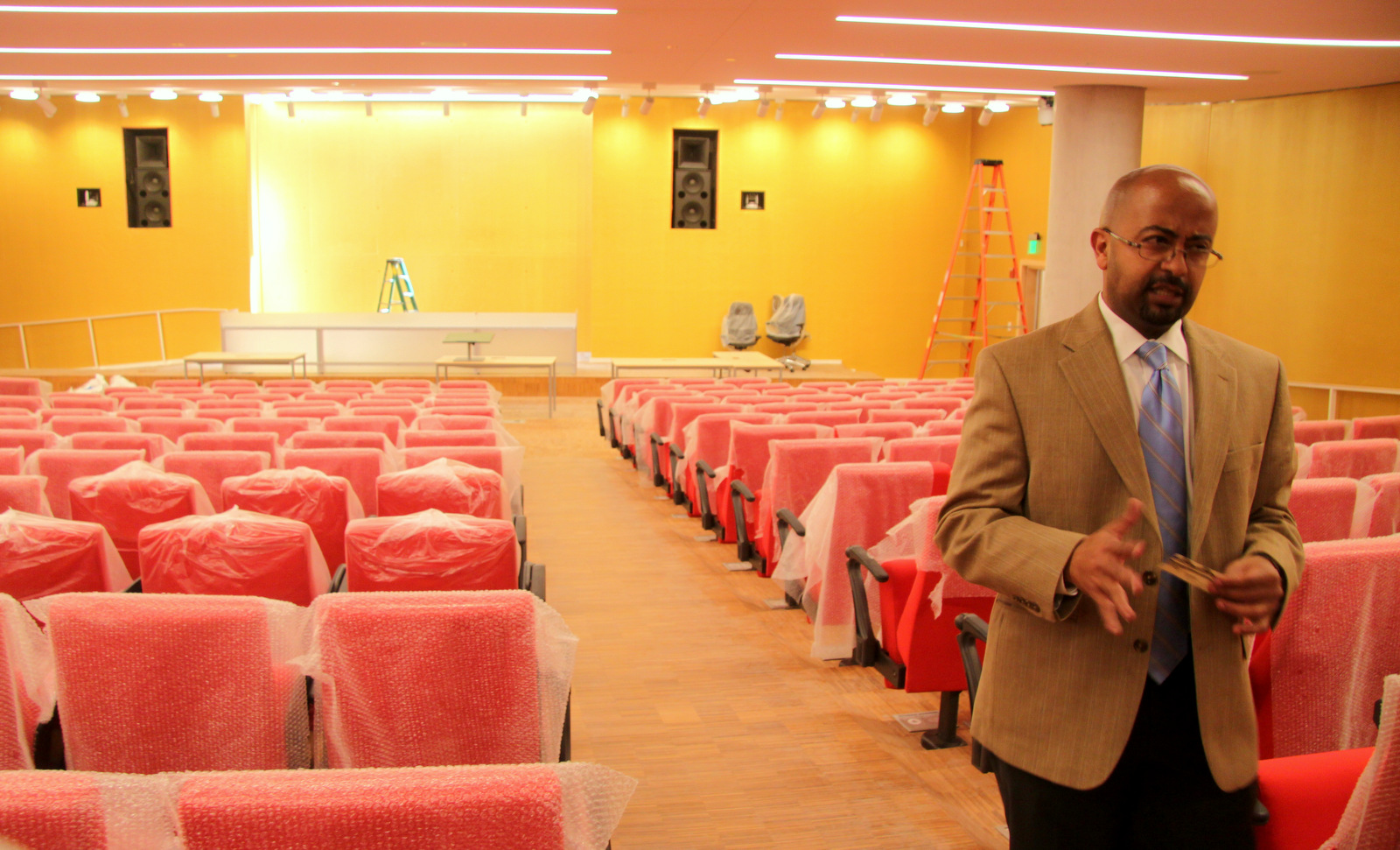 Behind the lobby is a below-grade, 300-seat moot court.

The upper floor levels are staggered, separating the various functions. Midway, at level six, is the coffee bar overlooking the terrace.

Here and on the adjacent floors students and faculty can meet and mingle.

The smooth, eleven-inch thick, post-tensioned concrete floor slabs rest on large concrete columns. Walls and ceilings are also unfinished concrete. Maple was used for the stairways and trim, and bamboo for the flooring and trim in the moot court.

In the classrooms and elsewhere, acoustical baffles hang from the ceilings between the rows of lights. LED lighting is employed throughout the building, most notably in the lobby where the wing-like suspended chandeliers appear from the outside like a flock of white birds or butterflies.

A major concern was how to counter the greenhouse effect produced by a glass building in a warm climate. The conventional steel and glass high-rise structure has fixed windows. In hot weather, the cooling system works overtime, consuming lots of energy.

Not here. The designers collaborated with environmental engineers Transsolar, another Stuttgart firm, “to leverage the Baltimore climate and limit reliance on energy and water,” said architect J. Michael Barber of Ayers, Saint, Gross who worked with contractors Whiting-Turner Construction. 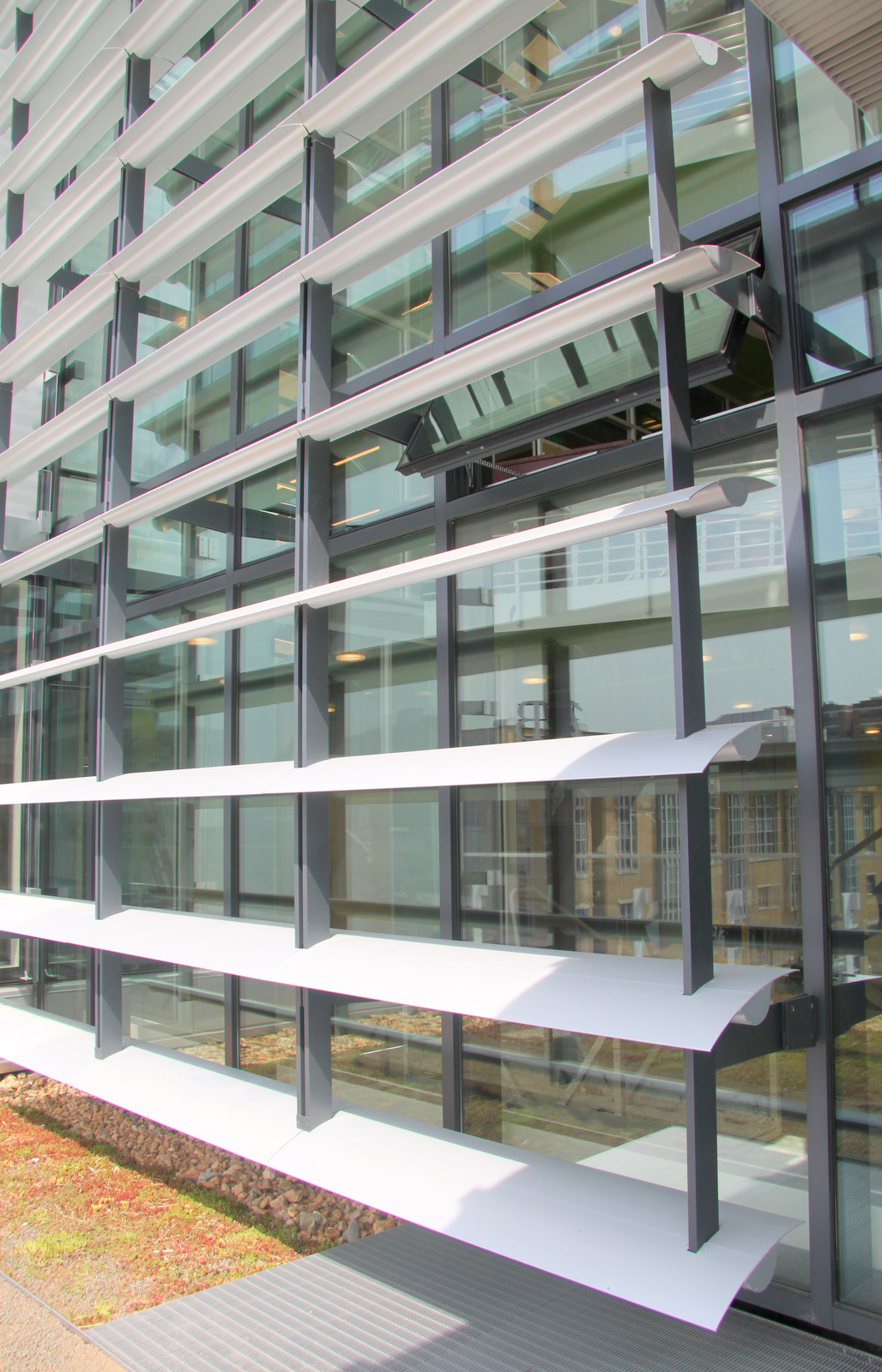 The double glass facade acts to some extent as a noise deflector, according to Noblett, but mainly guards the exterior sunshades.

These are metal Venetian blinds (aluminum slats on steel cables that retract into a housing above the windows) that raise and lower automatically with the aid of heliostats on the roof which track the sun.

Almost all of the windows can be opened, though only with the “smart” building’s permission, indicated by illuminated green lights.

“There are wind loads on tall buildings and the exterior blinds tend to blow around,” said Noblett, “so we put on another layer of glass to protect them.”

Also on the roof are collectors that harvest rainwater. This is stored in cisterns and used to flush toilets and provide water for the waterfall and canal in the rear of the building.

The motorized windows that flood the law center with natural light open, also automatically. Combined with the 12-story atrium, this can provide a draft through the interior in warm weather producing a thermo-siphon effect, a modern adaptation of an old method of non-mechanical cooling that was used in some Victorian Baltimore houses and office buildings.

For three or four months of the year, the law center will rely on natural ventilation, according to Barber. The building is lit from the sides, rather than being top-lit (which is why the library folds over the rest of the structure) another concession to Baltimore’s hot summer sun.

The concrete structure itself will aid in interior climate control. Built into the concrete floor slabs are over 50 miles of plastic tubing to provide radiant heating and cooling, another ancient system famously employed in American domestic architecture by Frank Lloyd Wright.

The law center does have a conventional HVAC system, but it is less than half the size of one that would be required for a normal building of its size. Sustainability, another watchword of green architecture, was achieved by waste recycling and using recycled materials in the rebar and concrete.

But high tech is not low cost. The added bells and whistles substantially raised the price of constructing the $114 million, 192,000 square foot building. 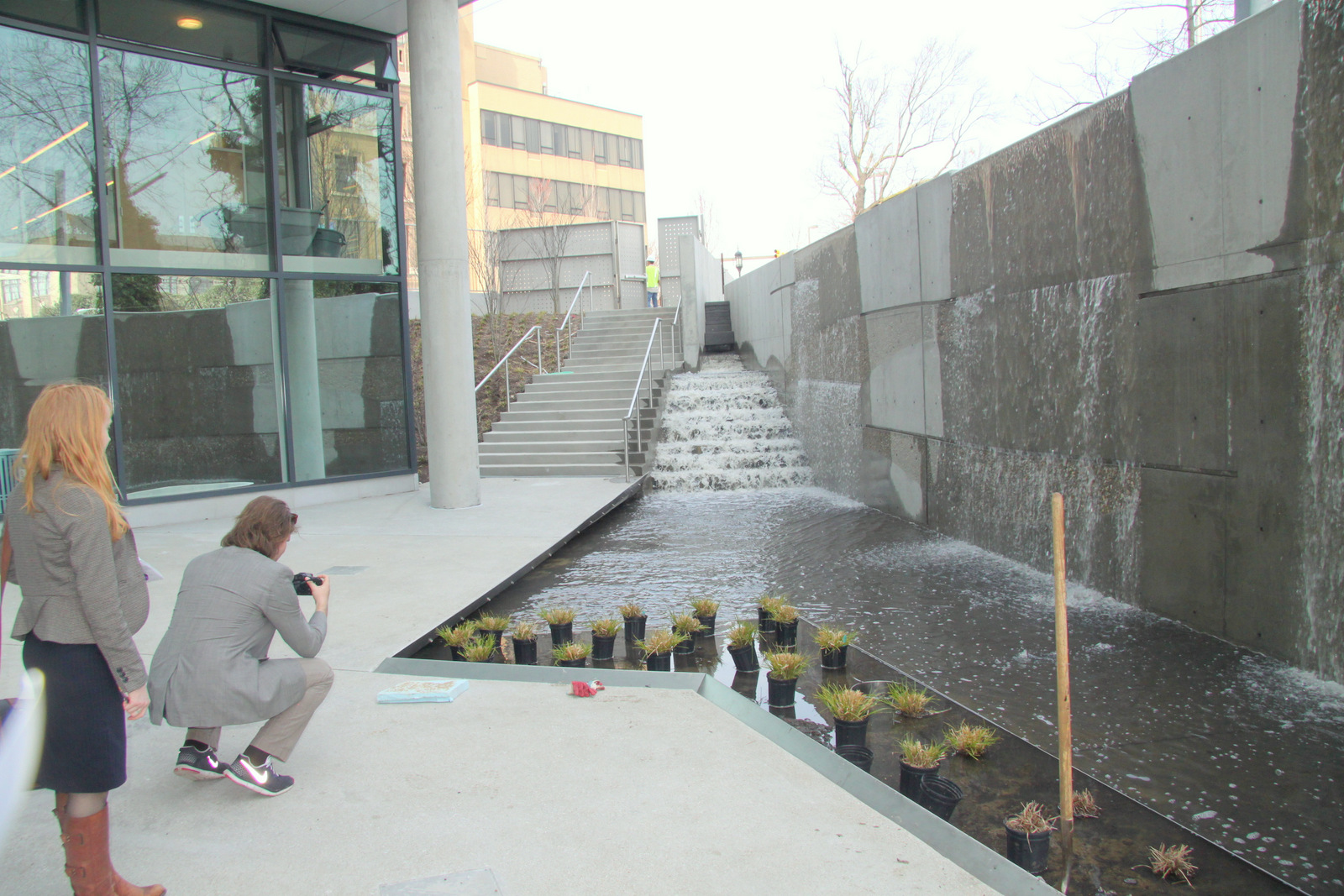 Recycled rain water flows through, and outside, the building. (Fern Shen)

That works out to $594 per square foot, about three times the cost of a conventionally built commercial structure.

How long does it take for the savings in energy and other costs to outweigh the additional expense of incorporating the means and the technology to achieve them?

“The cost was $5 million more than a traditional building,” said Robert L. Bogomolny, the University of Baltimore President, at Monday’s press briefing.

“You’re going to come out of the train station and see this building,” he continued. “It is expressive of the university. It’s the most exciting thing we’ve done.” 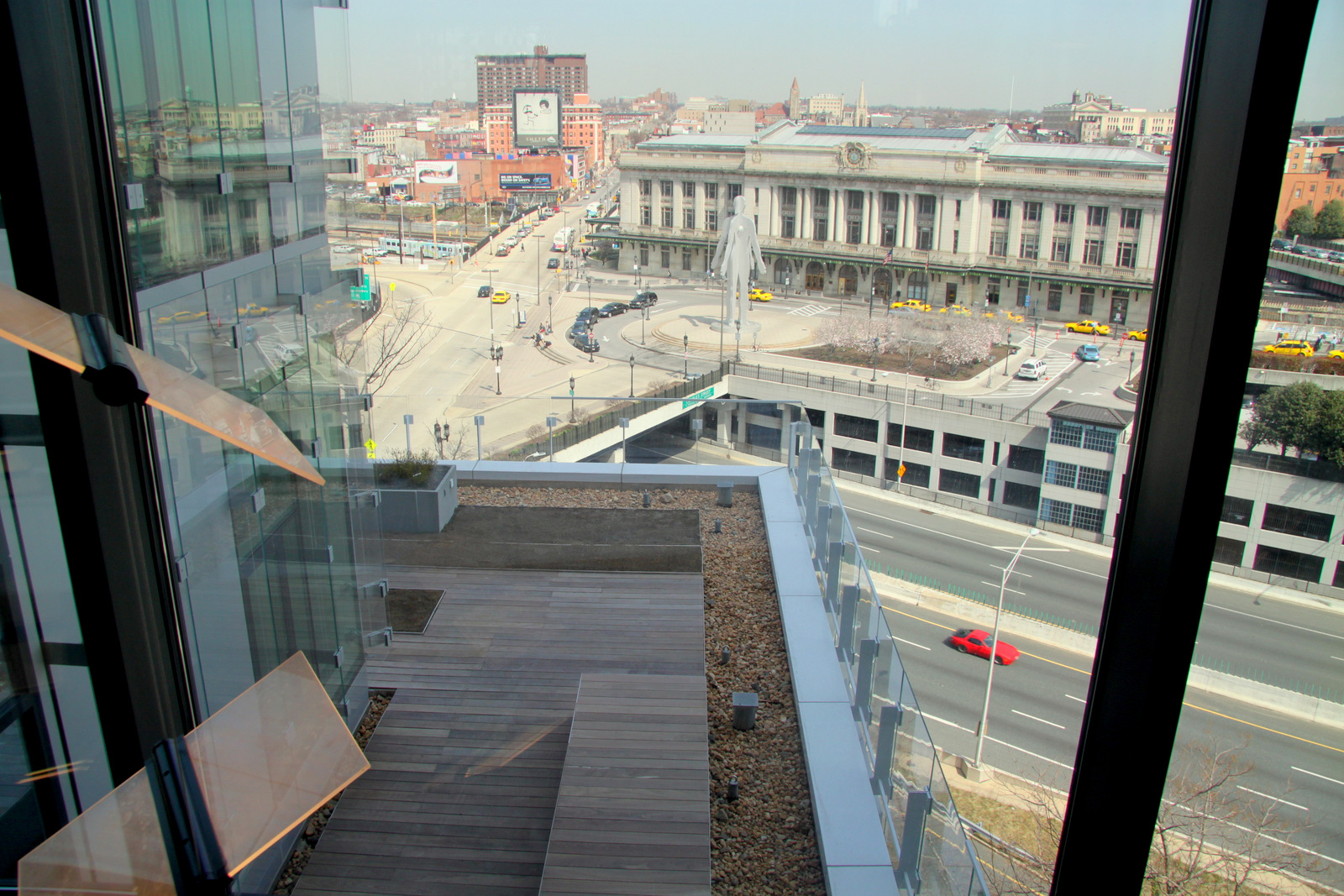 One of several open air terraces looks out on Penn Station and the Male/Female sculpture. (Fern Shen).

Angelos contributed $15 million of the $22 million in private funding that went into the project, with the state of Maryland picking up the rest of the cost.

Regardless of how the costs work out in the future, the University of Baltimore law school, previously housed in several scattered structures, now has a signature building to define the campus. And mid-town Baltimore has, at a prime location, a new and most welcome landmark.
_________________________________
Veteran journalist Jim Dilts wrote A Guide to Baltimore Architecture with John Dorsey.