While still in “listening mode,” Associated Catholic Charities is considering major shifts in the operation of the Baltimore’s homeless shelter, including the daily “line-up” of those seeking a bed.

The practice by current operator JHR Inc. to require homeless men and women to form a line every afternoon at the Weinberg Housing Resource Center and wait – sometimes for hours – to get a bed is being reviewed by Catholic Charities.

The nonprofit. long affiliated with the Archdiocese of Baltimore, was awarded a $2.7 million contract yesterday to run the 250-plus-bed city shelter starting July 1.

In addition to JHR, which has operated the center since it opened in 2011, Catholic Charities beat out At Jacob’s Well and The Baltimore Station for the contract, according to Olivia Farrow, director of the Mayor’s Office of Human Services. Baltimore Station will continue to manage the city’s overflow shelter on Guilford Avenue.

“We are thinking of assigning a bed to a person for a certain number of days and then work with that person to help them overcome obstacles and be placed in permanent housing,” Christine Cambareri Kay, associate director of Community Services for Catholic Charities, told The Brew yesterday.

By assigning regular beds, people using the shelter would be free to look for a job or seek social or medical services during the day, she explained.

The afternoon line-up required by JHR was a source of friction between the operator and homeless advocates such as James Crawford Jr., head of the grassroots group, Bmore Housing For All. 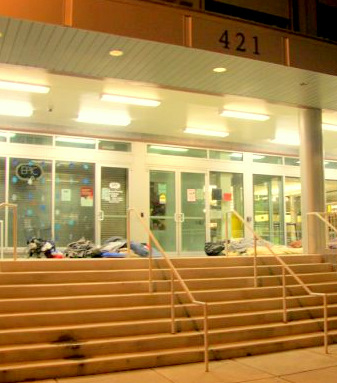 Homeless sleeping around midnight on the foyer of the Health Care for the Homeless building. Some say they preferred staying outdoors over going to the city shelter. (Photo by Fern Shen)

Crawford, a former homeless veteran, said JHR’s policies thwarted rather than helped people get the necessary help to improve their situation.

“Anything is better than JHR,” Crawford said, but cautioned that many problems at the shelter stemmed from the city’s poor  maintenance of the facility.

“We have washers and dryers that have been out [of service] for over six months. There’s been fecal matter coming out of the showers. We want to call the city to account,” he said.

Kevin Lindamood, president of Health Care for the Homeless, also criticized the JHR line-up, saying it “had a negative effect on our appointment rate in the afternoon.”

People told him that “they would rather get a bed” than obtain medical services at the clinic, which is located two blocks south of the shelter on the Fallsway.

More than a dozen homeless people have told The Brew that security conditions at the shelter were so poor that they preferred to sleep on the streets or at makeshift encampments under the Jones Falls Expressway.

Two months ago, a 46-year-old homeless man was stabbed to death inside the shelter. In March, the city cleared away “Camp 83,” a homeless village located on a sliver of land next to the Madison Street on-ramp to the JFX.

Lindamood praised the city’s decision to award the contract to Catholic Charities. “They have been trusted partners in our work. They were one of the original coalition members that created Health Care for the Homeless in 1985.”

He added: “Running a 24-hour shelter when need outpaces supply is a difficult proposition for any organization. I’m thankful that Catholic Charities has stepped up to the challenge.”

Kay said that Catholic Charities is concentrating on hiring a staff of 50 to 55 persons to manage the shelter and its outreach programs, as well as to tap into its large reserve of volunteers.

In listening to feedback from homeless clients, Kay said that “foremost they want to be treated with dignity and respect, and that is our mission, ‘cherishing the divine within.’”

Catholic Charities operates Our Daily Bread, located across the Fallsway from the shelter, with a large contingent of volunteers providing free luncehs every day. It also runs My Sister’s Place, a day shelter for homeless woman; My Sister’s Place Lodge, a haven for women with mental illnesses; and Christopher Place, an employment center.

In a press release yesterday, executive director William J. McCarthy Jr., noted, “Catholic Charities has a long-term commitment to, and experience in, assisting people who are living in poverty and homelessness through a continuum of services. Last year alone, we provided over 370,000 meals to hungry people; intake, casework and emergency services to over 13,000 individuals and families; and employment and training to 1,034 people.”

Operating the Weinberg shelter, McCarthy said, would be an extension of its commitment to improve conditions for the city’s poor.