A sewage overflow – first reported on Sunday (May 26) at 7 p.m. but not stopped until 9:30 a.m. on Monday – sent approximately 21,775 gallons of sewage into the Jones Falls, according to the Department of Public Works.

The sanitary sewer overflow “was caused by buildup of grease in a sewer main in the 4700 block of Falls Road” and was “stopped by the use of a pressure jet,” according to a press release emailed late yesterday.

The Maryland Department of the Environment and Baltimore City Health Department were notified and the stream has been posted, the release said.

A visual inspection of the site this morning by The Brew – a remote section of the Jones Falls that runs adjacent to Western High School just north of Cold Spring Lane – showed no posted signs and no visual evidence of pollution.

Two six-foot-diameter outfall sewers were being tested by DPW pollution control analysts Nick Mitrus and Mike Schlenoff. They had hiked down a steep embankment to the outfalls and were field testing the water for such things as suspended solids, traces of ammonia, tetracocci and dissolved oxygen.

The press release urged the public to call the Health Department at 410-396-4422 for more information about health concerns as a result of sewer overflows.

“To help prevent these types of overflows,” the release added, “please do not put fats, oils and grease (FOG) down your drain.”

We asked the city Health Department a few questions about this spill, since DPW directed citizens to call them with any. Here are their answers, provided by spokesman Michael Schwartzberg:

What are the specific health implications of this Jones Falls sewage overflow for the public?

Sewage can spread illness, disease and even death. Sewage is full of contaminants, viruses and bacteria that pose a serious threat to people and pets. In addition, sewage may contain other toxic substances like pesticides and residuals from pharmaceutical drugs. Coming into contact with raw sewage can be hazardous. There are many different health problems that could result from sewage damage, such as bacterial infection, Intestinal infection, skin infections, eye infections.

When it says the spot is “posted” what does that mean? Is it hazardous for a certain number of days? Hazardous to step in the water? Drink the water?

The “spot” is the location in the stream in which the contamination began. There is no time frame in which the hazard remains present. Once a sign is posted it is typically left up until nature or vandals remove it. The Maryland Department of the Environment (MDE) has not approved any beaches or waterways in Baltimore City for swimming, and there is no routine monitoring to ensure the safety of these waters for swimming. Therefore, BCHD recommends that citizens do not swim or wade in any Baltimore City beaches or waterways. Water from waterways is not approved for drinking and should not be used as drinking water.

The DPW release specifically directs the public to the Health Dept. so I presumed there’s some reason for that.

The Health Department is typically called when there is a sewage backup in someone’s house. In those cases, we provide recommendations on how to properly clean the contaminated areas. If someone were to contact us about a sewage system overflow in a stream or inlet we would advise them to not have any physical contact with the water. 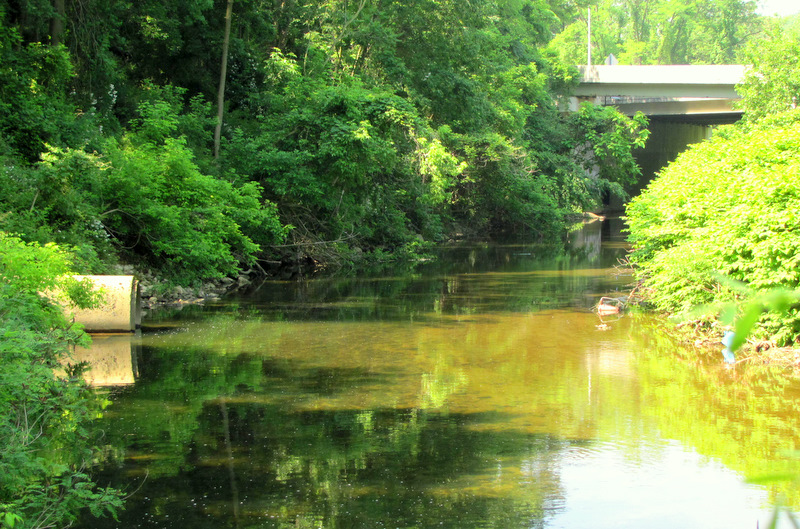 Looking downstream this morning from the site of Sunday night’s sewage spill. The northbound JFX is in the background (Photo by Mark Reutter)