Tears were shed, protests held and a city-wide debate raged over the decision by Mayor Stephanie Rawlings-Blake to clear an encampment of homeless people from a strip of land wedged between the Fallsway and an I-83/Jones Falls Expressway on-ramp.

But one thing is certain about the old “Camp 83” site – it didn’t take long for homeless people to return there.

Yesterday, as picketers were in front of City Hall protesting what they consider to be the latest draconian assault on the destitute – a proposed de-facto ban on downtown begging – the administration crackdown’s on the camp last spring appeared to have been only a fleeting victory:

There was a makeshift shelter, with blankets and tarps anchored to a low on-ramp wall by string, straps and chunks of concrete. 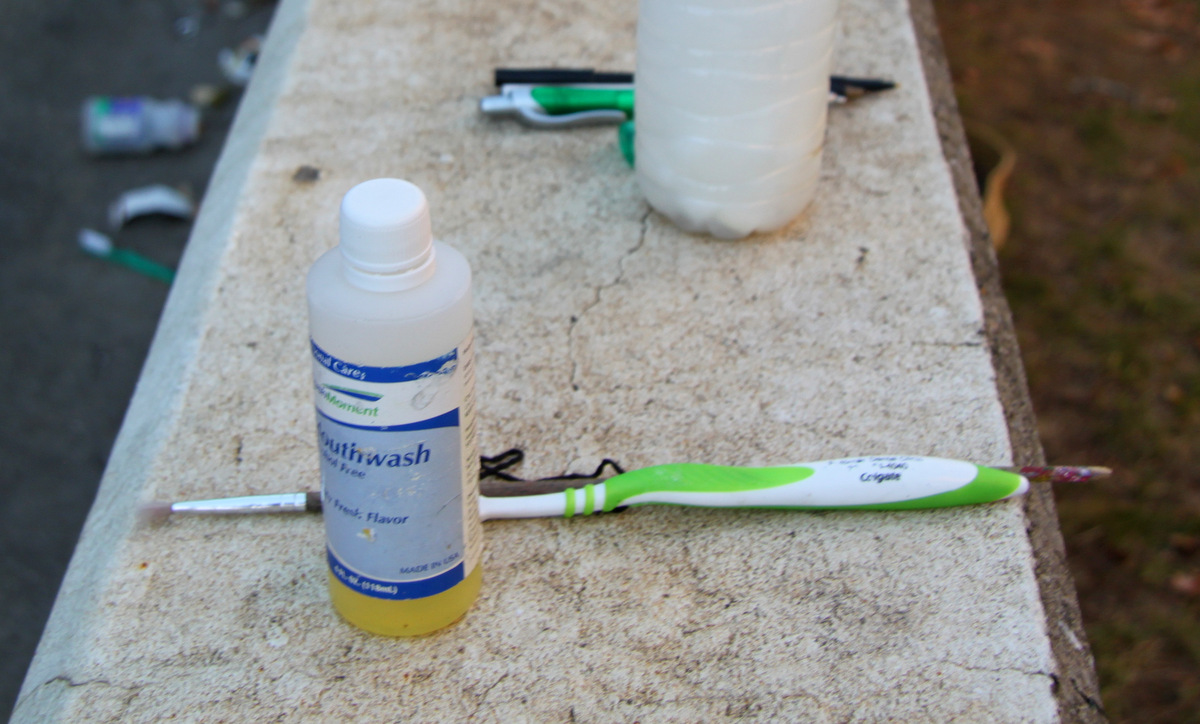 Toothbrush and other toiletry items on expressway ledge. (Photo by Fern Shen)

There were socks hung on trees, rubber sandals in the grass, water in plastic  jugs, small suitcases, duffel bags and a re-usable shopping bag filled with empty plastic water bottles and a roll of toilet paper.

Along the top of the ledge of the on-ramp (closed right now for JFX construction work) there were toothbrushes, mouthwash, deodorant and soap. Plus pens, Spanish-language brochures, a dog-eared Bible and a bulletin from the Our Daily Bread soup kitchen.

City officials had said at the time that safety and health concerns drove their decision to dismantle the five-year-old encampment, where 15 people were living and apparently at times using grills to cook food.

They were eventually taken in by the private non-profit, Belvedere Assisted Living. After the residents removed their belongings, city workers hauled off what remained in trash trucks.

A chain link fence was erected, cutting off some, but not all, of the Camp 83 space. A sign on the fence says “Property of DOT.”

Anyone driving north on the Fallsway (near Central Booking) can see that, eight months later, people are living now in front of that fence. Asked yesterday if she’d noticed them, Antonia K. Fasanelli, said “of course.” 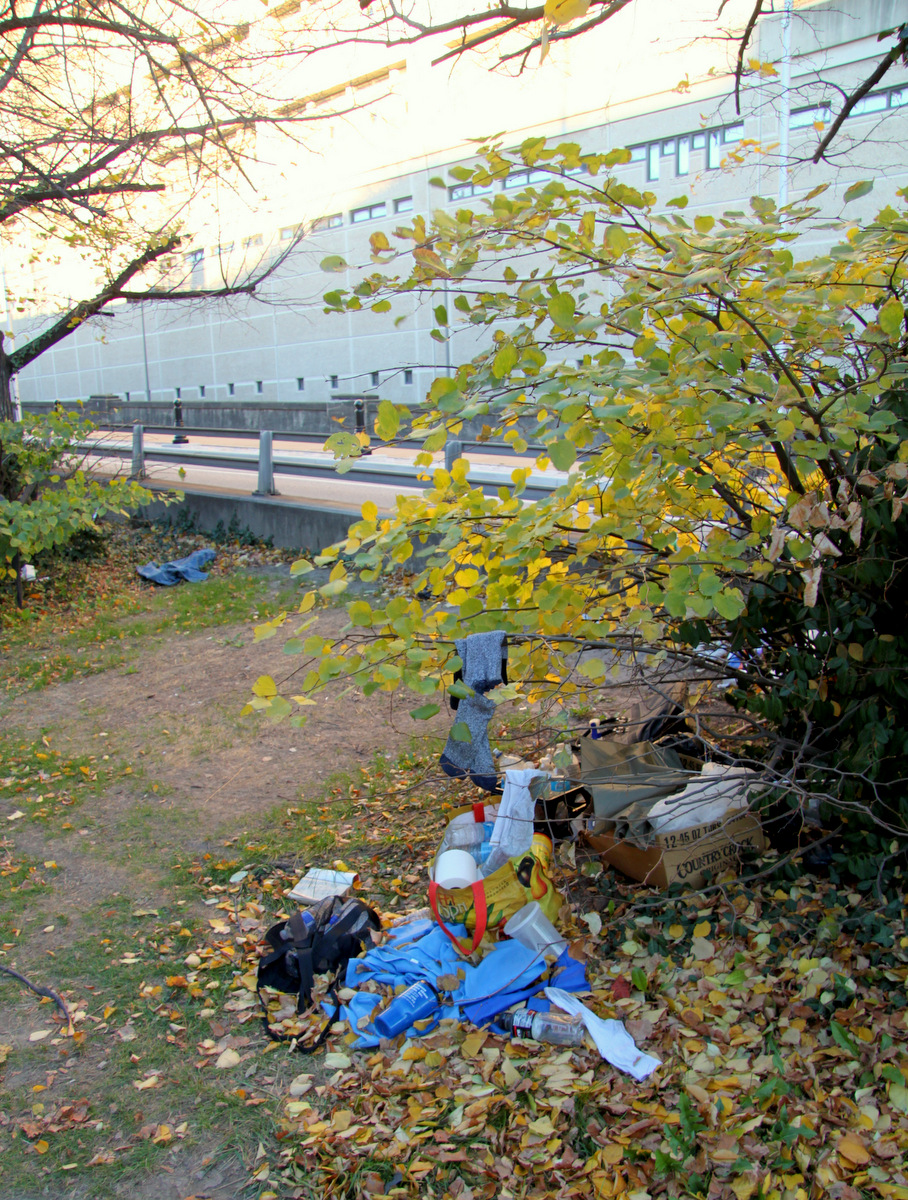 The executive director of the Homeless Persons Representation Project, Fasanelli was in City Hall to see what the City Council would do with the panhandling ban she opposes. (They sent it back to committee.)

“What this tells you is, the effort to clear Camp 83 had nothing to do with solving the problem of homelessness,” she said, noting that homeless people are sleeping under overpasses and in doorways across the city, as well as at the re-colonized Camp 83 site.

Official estimates put the number of people without a home on any given night in Baltimore at about 4,000.

Evicting 15 people from that one spot, Fasanelli said, “was ill-thought-out and obviously ineffective.” 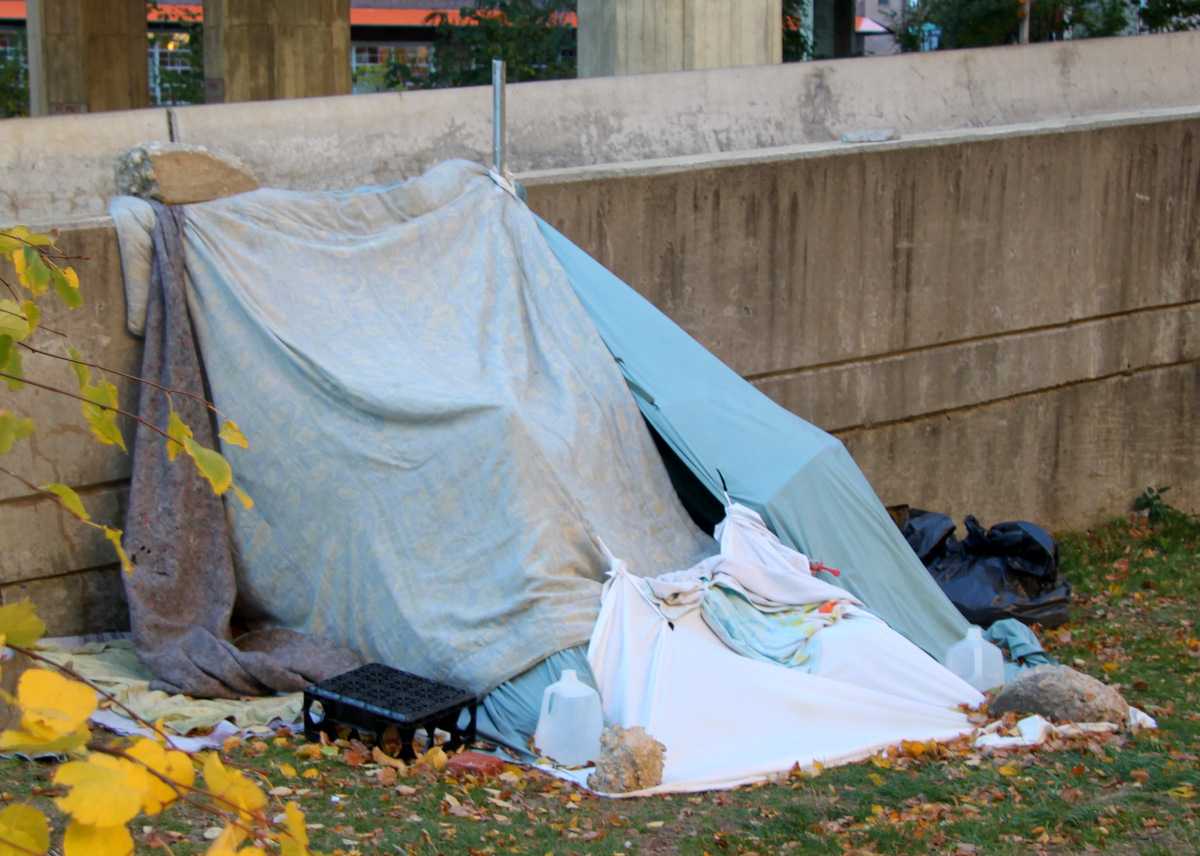 A makeshift tent shelter pitched against the Madison Street on-ramp to the JFX. (Photo by Fern Shen) 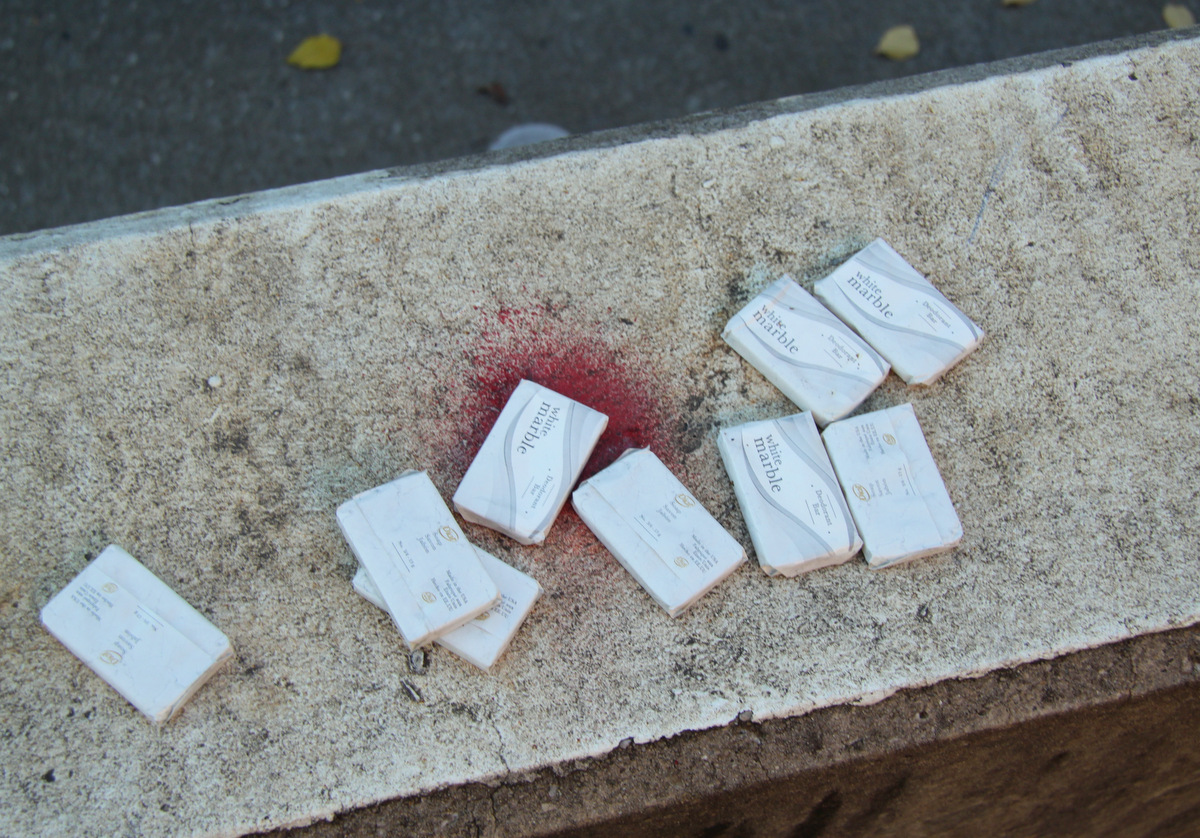