No one would call Baltimore a paragon of government transparency (there’s no live streaming of City Council meetings, for example, and no timely archiving of Board of Estimates deliberations).

But there is one small and weird oasis of City Hall accessibility – Liquor Board videos.

For the last year and a half, Liquor Board Chairman Stephan A. Fogleman has been making YouTube videos from the weekly hearings where he and his two fellow commissioners rule on license transfers, violations and other matters involving liquor stores, bars and restaurants.

But of the 400 or so hearings held annually, Fogelman has only put a fraction – about 115 or so – up on YouTube, in most instances only capturing a few minutes of the whole proceeding.

(Individual cases can stretch on for 30 minutes or more. Testimony can run the gamut from dry legalistic construction details, to items on a new restaurant’s farm-to-table menu to stark descriptions of the lapdancing and used condoms spotted in the backroom of a bar.)

So just how does Fogleman decide which hearings and what moments to put up on the web?

We took that subject up with him in a recent phone conversation. Cynics theorize that the whole exercise is designed to buttress his publicly-declared quest for a District Court judgeship.

But Fogleman said it’s all about transparency, an issue which has drawn criticism of the agency in the past. “It’s been good for the board,” he said. “It’s our attempt to demystify the proceedings for the public, provide some transparency.”

In the YouTube page’s “about” section, he notes that these are the Board’s “incomplete televised archives,” calling them “only a cross-section of the matters that come before the Board.”

We first noticed one of these videos on the Community Law Center’s November 21 post on its Booze News blog. It shows Fogleman revoking an East Baltimore bar owner’s license after serious and detailed testimony about multiple occasions in which drug dealing was taking place on the premises.

The main video kept at the top of the page features a cheerier case – the June hearing in which Atomic Books in Hampden is granted a liquor license.

“An iconic Hampden business for over a decade now,” Fogleman says before announcing the favorable result. The two-and-a-half-minute clip shows the decision phase of the hearing, which is typically when Fogleman, in his role as chairman, sums up the issues and announces the decision. 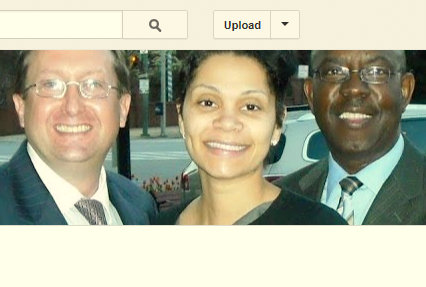 Speaking with The Brew, Fogleman said he now tries to make the videos on just the decision phase – after finding out, the hard way, that making videos of entire hearings was time-consuming and technically beyond him.

Over time, Fogleman said, he also learned what subject matter was most popular.

“I realized even a mundane hearing for a well-attended restaurant was getting tons of hits,” he said. “People are more likely to click on it, if it’s a place people like and know.”

And so, in there with the underage liquor sales cases and stripper-bar smackdowns are non-controversial cases involving such licensees as Liam Flynn’s Ale House, the Hampden Food Market and Peabody Heights Brewery.

The attorney for Tavern on the Hill starts off by saying, “I appreciate your concern for – that my performance would be televised, Mr. Chairman.” Fogleman laughs and says, “That’s why I called you and told you to put on a tie on today.”

Then comes seven minutes of video in which licensees tell about the “comfort food” and possible performances by “MICA kids” they plan at the Mount Vernon establishment.

Viewers have begun recently – “for whatever reason, I have no idea” – to discover the videos, Fogleman said. “In the last three months, people have been coming up to me on the street and saying ”I liked what you did in that case.’”

Moments of Rebuke and Racism

To be sure, the board’s YouTube channel captures some valuable information that would be of interest to members of the media and community leaders who couldn’t make it to the Thursday afternoon hearings in person.

An example would be this video, showing the Horseshoe Casino coming in to get its liquor license. (“This is a re-do,” Fogleman says drily, a remark that requires this Brew reporting to understand.)

But the videos do not always stick to just the decision phase – and some of the additional footage chosen is curious.

One that caught our eye features longtime liquor license attorney Mel Kodenski uttering an offensive racial stereotype in an offhand reference to his own (apparently) Chinese clients.

“As you can see, these gentlemen are of Chinese extraction. . . and I guess we can thank them for our railroads, restaurants and keeping our clothes clean,” Kodenski says.

“Are you getting all that?” Fogleman can be heard saying in the background, speaking to someone in the audience, before the clip cuts away to the decision phase.

Another odd choice was the opening clip of the YouTube on the December 12 hearing about Meet 27 in Remington.

The beginning is a two-minute snippet of some detailed testimony by a clearly frustrated Remington Neighborhood Alliance President Joan Floyd.

Fogleman agrees with the licensee’s attorneys, criticizing her testimony as hearsay “you’re now going into everyone’s minds. . . you haven’t produced any transcripts.”

Floyd protests, “I’ve got my personal testimony, I’ve got my good name,” and finally Fogleman cuts her off declaring, “Miss Floyd, you are out of order.”

Then it’s on to the decision phase.