Southeast Baltimore residents who packed a Highlandtown church last night to confront the mayor and police commissioner about a violent crime wave in their community – and perceived official indifference about it – met conditions that seemed to confirm their suspicions.

The sound system didn’t work and about half the crowd of about 450 – packed into overflow space in the basement or left to stand outside – couldn’t hear a thing. (A separate group of police officials was sent down to talk with the basement crowd.)

At the start of the meeting, Mayor Stephanie Rawlings-Blake addressed the public perceptions about her attitude head-on, saying her recent remarks had been misunderstood and she was not trying to “blame” the community for lack of involvement in efforts to prevent and combat crime. “That wasn’t my intention.”

But she did suggest where to lay the blame for this misperception: social media. And it was Twitter she called out in particular, even though her remarks were reported and discussed in platforms that allowed for lengthy commentary and dialogue (Facebook and Medium, for example).

It was the opening salvo in a two hour-long meeting at the Breath of God Lutheran Church, organized by Del. Luke Clippinger and headlined by the Rawlings-Blake, Police Commissioner Anthony W. Batts and his top brass.

In attendance were an assortment of fire, police and cabinet officials, four city councilmembers, at least three political candidates and a standing-room-only crowd of residents from Canton, Highlandtown, Patterson Park and across Southeast Baltimore.

Many in the crowd readily shared their frustration to a reporter.

“I fell in love with this city. I pay ridiculous property taxes and was happy to do so,” said a woman who described the aftermath of a daytime hold-up at a Canton pizzeria recently and of being mugged by juveniles six years ago.

Her plan is to move soon. “I went to cop walks and community meetings and feel like a lot of that was hot air.”

It wasn’t just the recent sharp spike in Southeast District crime they spoke about, but a city government that fails to respond to complaints about a civic malaise that ranges from litter and blight to home invasions and murder.

“An Epidemic of Complacency”

One woman began by talking about 311, noting that it might seem off topic, but isn’t.

“Our street’s a mess, our alley’s a mess. It looks like a thrift shop. We’ve got trash and rats. . . We’re constantly calling 311. Nothing changes,” she said, describing people who drive up in SUV’s, dropping bags of fast-food trash out their windows. “It doesn’t matter how many times you have a community cleanup, how many times we clean up our tree pit.”

“You litter. Then you light a dog on fire. Then you bludgeon a person to death. Bash someone on the head with a brick. You rape someone. You kill someone. It’s all related because it’s a lack of respect of your environment of your fellow man and I want to know what are you – how can we do something about it?”

She said the city has been no help with the trash and many other problems, including “a house next door to us with illegal daycare, multiple un-zoned dwelling units, drug deals happening through the basement window.”

Rawlings-Blake told her, “We’re all frustrated.”

Batts got big applause by starting off with an apology to residents “because some of the things that are taking place in this community should not be happening.”

“I am embarrassed. . . In the fact that we have to come here in this meeting to address these things,” he said, walking up and down the center aisle of the church, promising more meetings and to be “open, honest and transparent.” 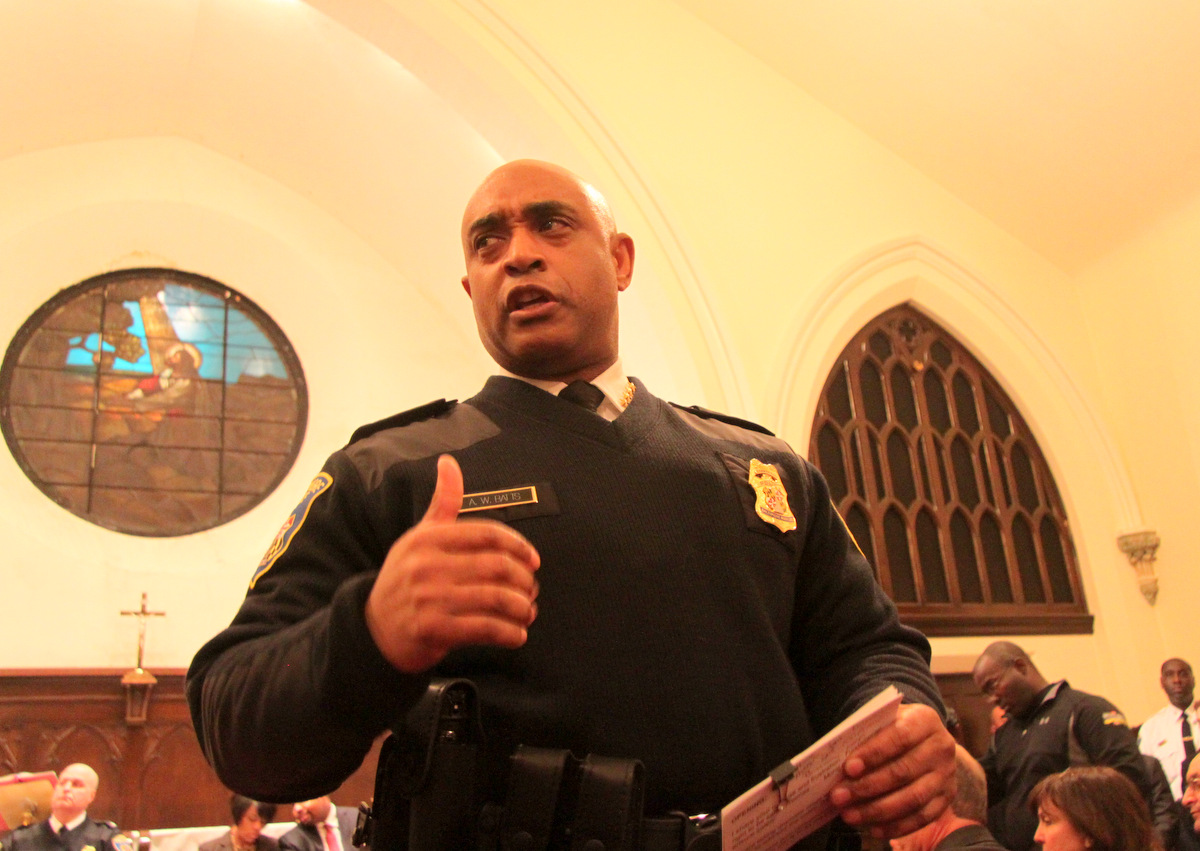 Police Commissioner Anthony Batts apologized to the crowd: “We have to do better.” (Photo by Fern Shen)

He acknowledged the incident that perhaps most galvanized the community,  the murder of a 51-year-old bartender in her Ellwood Avenue home two weeks ago.

“My heart is broken from having the loss of life of Miss Kim Leto. . . People loved her, her neighbors are here.”

To a question about whether police would be stepping up patrols in the area, Bats said yes, they would continue to, adding that he gives this attention to any neighborhood in the city experiencing a crime spike.

Acting Southeast District Commander Deron Garrity promised that officers would be getting out of their cars more. “I hear that time and again – when police arrive, they’re like robots,” he said.

Batts said that his department ranks extremely low in citizen surveys on interactions with the community. He said he planned to “pay overtime” to have officers “sit down in a circle” with community members and “see there’s a lot of good people there.”

As for what has been causing the crime in the Highlandtown and Canton ares, Batts said that some neighborhoods were “being overrun by juveniles. . . in their school uniforms,” burglarizing homes before and after school hours.

Batts said police are combating the problem with undercover surveillance, and he and Rawlings-Blake both talked about the expansion of a juvenile curfew center. They also announced the number to report truants to school police – 410-396-8588.

There were a number of specific issues raised at the meeting.

They ranged from lack of translators causing the under-reporting of crime by Spanish-speaking people (Batts said the city needs more of them) to criminals back out on the street with seemingly no punishment (“Where’s Bernstein?” a man shouted repeatedly from the crowd.)

What about preventing crime by working with kids to keep them on the right path?

Rawlings-Blake said she was moved by the sight of 6- and 7-year-olds showing up at the summer curfew center at 1 in the morning. “What must be going on in their lives – or not going on – for that to happen?” she said.

Meeting organizers were ready with resources, pointing to representatives of a number youth-oriented organizations on hand to sign up volunteers.

But several in the audience wanted to return to the issue of the mayor’s remarks suggesting irritation with online discussion about the crime wave and calling for critics to take more responsibility.

“There is a very, very strong perception, at least among some of us, that you and your administration are incredibly dismissive of feedback from the community and I think the way you talk about social media certainly contributes to that,” said Cory McCarty of Butcher’s Hill.

“Because there a lot of very good conversations from very well meaning people on social media,” he added. 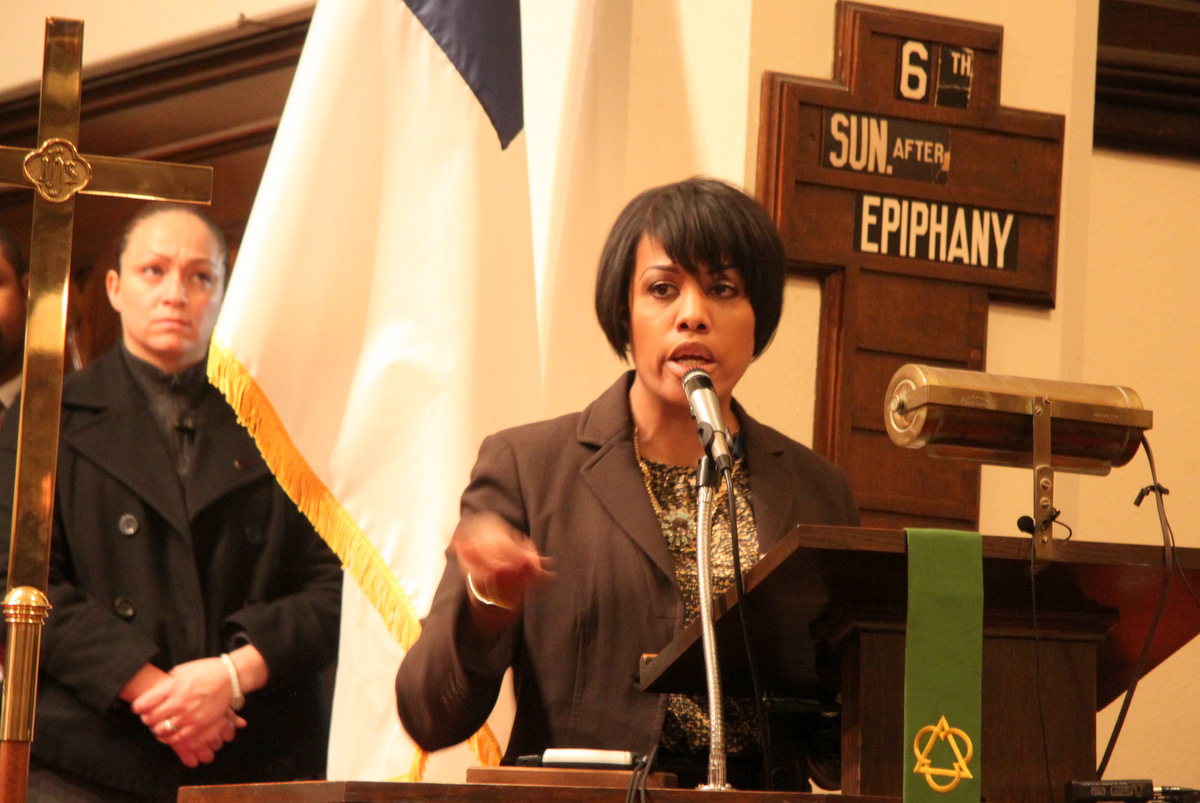 Mayor Stephanie Rawlings-Blake said she is “frustrated” by the persistent crime wave. (Photo by Fern Shen)

Rawlings-Blake and another audience member went back and forth on the subject, with the man saying if his clients heard him say he was “frustrated” by his inability to engage meaningfully with them, “They would fire me.”

“If this community hadn’t been so up-in-arms, when would you have called this meeting?” he said to applause.

Batts jumped in to shoulder the blame. “Calling the meeting shouldn’t be the mayor’s responsibility,” he said. “It should be my responsibility.”

What the Mayor Had to Offer

McCarty asked the mayor what she was going to do “to address the perception” of her administration’s indifference to the public. Several other audience members politely offered her the opportunity to do so.

One of the first questioners, for example, was a woman who said she is active and involved in her neighborhood and reports problems and suspicious activity when she sees any.

“The mayor mentioned as to how we can be more engaged,” she said. “I’m willing,” she continued, but asked Rawlings-Blake what else could she do?

The mayor began her answer by talking about how her administration is implementing technology to allow officers to spend more time on the street. She specifically mentioned ShotSpotter, which the city “will be introducing shortly” that is “state of the art” and “hooks up with our cameras and when there is a shot fired, trains the cameras to the activity.”

Circling a bit closer to the woman’s question, the mayor seemed to be telling her to do what she was already is doing.

“Sometimes the best way we get things solved is just by folks looking out the window and being vigilant and communicating when they see something that doesn’t look right,” Rawlings-Blake told her. “We have a Crime Watch number. . . You can turn in information anonymously.”

Rawlings-Blake ended by bemoaning one impediment to community participation: “We all know in some communities there are too many people with the stop snitching mentality.”

The woman’s second question, directed at Batts, suggested she was well beyond Crime Watch.

“I’m five months pregnant I have an 18 month-old daughter. I’ve been broken into once,” she said. “My husband travels for work so I’m concerned about the force I’m allowed to use if someone enters my home and I want to protect my children.

“I want to make your external community safe, so you don’t have to buy a weapon.”