Baltimore housing officials – who have refused to answer a reporter’s questions about their plan to sell off high-rise public housing – made a surprise call during the last few minutes of yesterday’s Marc Steiner Show on WEAA 88.9 FM.

“First of all, we have met with the residents of every single one of the high-rises . . . as required,”as well as “the city-wide Residents’ Advisory Board,” said Housing Commissioner Paul T. Graziano, who called in to the station.

“They wholeheartedly embrace this program,” said Graziano, who is also executive director of the Housing Authority of Baltimore City (HABC).

His comments came during a segment of the show in which reporter Melody Simmons was discussing her February 27 Baltimore Brew story about the program which, she disclosed, has been under discussion for months by housing officials and has sparked concern from advocates for residents and the disabled.

During his brief phone call, Graziano did not answer questions from Steiner or Simmons. Housing officials had declined Steiner’s earlier invitation to come on the show.

When Steiner repeated that invitation, offering to give Graziano a chance on the air the following day to explain the matter in greater detail, he again declined.

“No, we’re not doing it tomorrow morning, I told you,” Graziano said. “I sent a message. We’re working out some final details with HUD. We’ll be communicating the full plan within a couple of weeks.”

Housing officials have declined repeated requests from The Brew to discuss the program, which has been fueling concern from many quarters in the city.

Tenants’ advocates fear the long-term impact of the move on poor city residents, particularly the elderly and disabled. Another unanswered question is the number of Housing Authority employees, maintenance workers reportedly, who would lose their jobs with the sell-off.

Tenants of Bel-Park Tower in Park Heights told The Brew that a buyer had already been found for their building, Landex Companies of Linthicum.

Graziano did not discuss those details but complained on the air that there was “so much misinformation flying around” about the city’s participation in the initiative. As The Brew reported, it is made possible by the federal Rental Assistance Demonstration Program (RAD) set up by Congress through 2011 legislation.

Graziano said that the statute “requires that the residents will be allowed to stay in their homes and that the rents must remain the same.”

“We are also putting a provision in all of the contracts where it is quite possible that we will be part owner of the building, but if not there will be a reverter clause that after the 15-year tax credit compliance period the Housing Authority will be able to take the properties back,” he said.

Graziano also complained that there had been no discussion on the show of the renovations to be made as part of the program. He noted that “we have approximately $3 million to $4 million per year in capital funds from Washington to upgrade the buildings.” 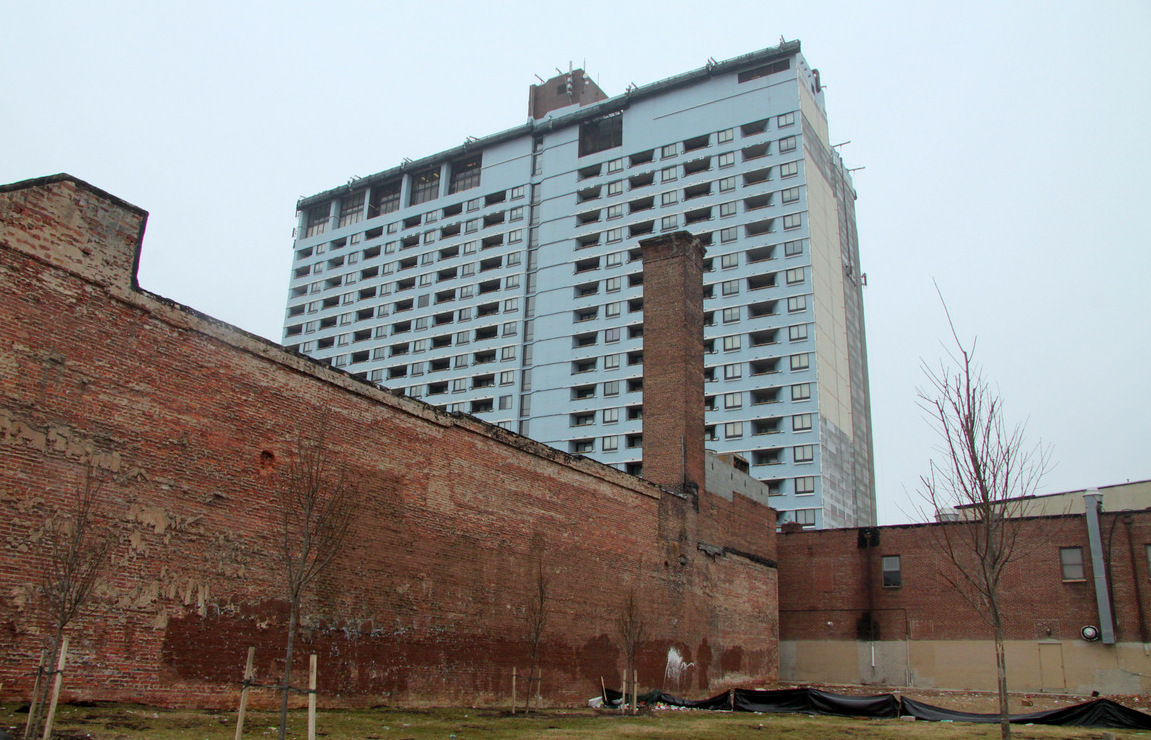 One of the city public housing high-rises being sold as part of the RAD program, the J. Van Story apartments on W. 20th St. (Photo by Fern Shen)

“By doing this program we can do in two-and-a-half years $320 million-plus in capital repairs,” he said. “That means renovating everybody’s apartment entirely, that means replacing elevators, replacing roofs, doing all the exterior work.”

He noted that at the J. Van Story Branch senior apartments on 20th Street, they are already spending “$5 million just to redo the exterior of that building so it will be water-proof and energy efficient.”

Not for Market-Rate Housing

Steiner had said earlier that he wondered if the city would sell off that building because of its proximity to the burgeoning Station North Arts & Entertainment District. Graziano appeared to be responding to him: “We are not selling it to some developer for market-rate housing.”

He also touched on a topic reported in The Brew based on interviews with residents and housing advocates – that tenants as part of the program are to be offered Section 8 housing vouchers to allow them to move.