For a politician who fashions himself as a man of the people who “aggressively represents the interests of the citizens of Baltimore,” City Council President Bernard C. “Jack” Young sure gets a lot of money from non-Baltimoreans.

In fact, more than 75% of the $161,000 that Young raised last year came from individuals with mailing addresses outside of the city limits. These figures were made available recently in reports to the Maryland Board of Elections. None of Young’s contributions was publicly disclosed by his office or his political campaign managers.

Jack Young holds the second highest elected job in Baltimore after the mayor and presides over both the City Council and the powerful Board of Estimates.

While Mayor Stephanie Rawlings-Blake raises substantially more campaign dollars than Young, she spends a lot of hers, while Young frugally keeps most of his cash stashed away in his election committee.

We will write about the mayor’s fundraising habits in an upcoming article. This post, part of The Brew’s on-going series of “Money and Politics in Baltimore,” will focus on the flow of money to Jack Young.

We submitted these questions to Young about his campaign finances:
•  Can you serve the citizens of Baltimore well when you rely so much on campaign cash?
•  Why aren’t you reaching out more for contributions by “average” citizens?
•  Does the money you receive from contractors and developers in any way influence your decisions on the Board of Estimates or City Council?
•  Do such donations give contributors special access to you or your staff?

A hard-working politician who prides himself on his street savvy, Young is known to travel to scores of community meetings every month to gauge the pulse of the people. His campaign literature touts his common touch and, depending on the audience he stands before, he can employ an easy, empathetic tone.

That’s one Jack Young. The other is an equally tireless seeker of campaign lucre, making calls to potential contributors and working with his treasurer, Keith Tmmons, and campaign advisor, Stephanie Mellinger, to drum up ticket sales at his fundraisers.

Young, now 59, got a late start in politics and was a backbencher until then-Mayor Martin O’Malley began laying the groundwork for his run for governor and Sheila Dixon was president of the City Council.

At the start of 2005, Young had a modest campaign kitty of $29,000, according to financial records on file with the Maryland Board of Elections.

By the time Dixon resigned as mayor following her 2009 corruption conviction – paving the way for Young to become City Council president to replace Rawlings-Blake who had ascended to the mayorship – the Eastside Democrat had become a powerful force in the incestuous world of campaign fundraising.

Incestuous because nearly all local politicians go after the same suspects – the contractors, developers and consultants who depend on City Hall business and the small businesses and shop owners that need to stay on the good side of city regulations and inspectors.

Young tapped into a tributary of the fundraising stream that had gone largely unnoticed by O’Malley and his protege, Stephanie Rawlings-Blake. 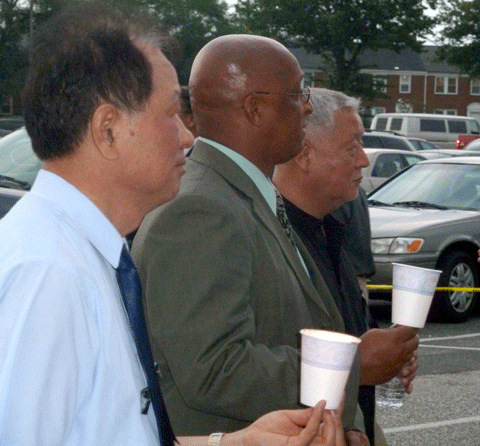 Young participates in a candlelight vigil for a Korean-American businessman killed outside a liquor store in 2011. (File photo)

What’s more, Young had gained the attention of some influential members of the city’s development community.

By holding frequent fundraisers and keeping expenses to a minimum, Young and Timmons had collected a cash balance of over $200,000 when the former assumed the City Council presidency in early 2010.

Power of the Purse

The Board of Estimates approves all contracts over $25,000 as well as ratifies all federal and state grants, which collectively are worth over $280 million annually.

While the mayor holds the ultimate power of the purse through control of three of the five board seats, the City Council president determines what items appear before the panel – and when. 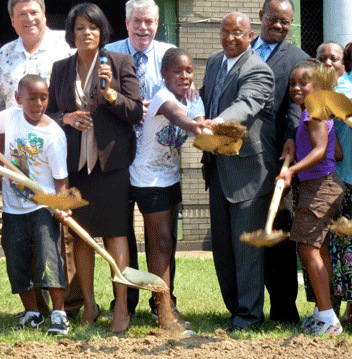 Young presents himself as a man of the people and avid backer of recreation centers and neighborhood fire stations. Here he is with Mayor Rawlings-Blake breaking ground for a rec center in Clifton Park. (File photo)

A review of Young’s campaign records shows how his change in position has altered his fundraising strategy.

While many of his earlier backers still buy tickets to his fundraisers at places like Nick’s Oyster Bar in Federal Hill, his campaign committee, “Friends of Bernard C. Young,” has many new acquaintances.

These include contractors and consultants employed in the rebuilding of the city’s aging sewer and water lines.

Phoenix Engineering contributed $500. Just last week, Young and the Board of Estimates gave a $69,500 contract to Phoenix for the design of electrical upgrades at the Back River Wastewater Treatment Plant. Transviron, which paid Young $250 last year, won $196,000 worth of work on the same job.

At the February 5 board meeting, Young approved two contracts – worth $21.5 million – to Am-Liner East of Berryville, Va., for improvements to the Herring Run sewershed. Am-Liner contributed $1,250 to Young last year.

It should be pointed out that these contracts had gone through the city’s procurement office and were approved by the Bureau of Water and Wastewater before they came before Young and the Board of Estimates. In each case, the approved contractor was designated the lowest responsive bidder.

Young, in other words, did not play an active role in pushing specific contractors through the procurement process. But he did appear to reap the rewards of a system in which contractors are actively solicited for contributions by elected officials who can ultimately approve, or reject, contracts worth millions of dollars.

In other areas of city business, where lucrative contracts are approved for road paving and parking garage leases, key players have become Young’s “Friends” with four-figure checks.

For example, Christopher McCoy paid $4,000 to Young last year through his construction company and his wife, Ladawn. McCoy has secured millions of dollars in city work at Chapel Green, Orchard Ridge and other “affordable housing” projects.

Pless Jones Sr., who recently secured from the Board of Estimates a demolition contract worth up to $15 million, handed over $3,000 to Young through P&J Contracting and National Construction.

Liquor store owners did not forget to pay their respects. More than $6,000 flowed into the “Friends” coffers from places like Sherman Liquors, New Q’s Tavern and K&C Liquor. 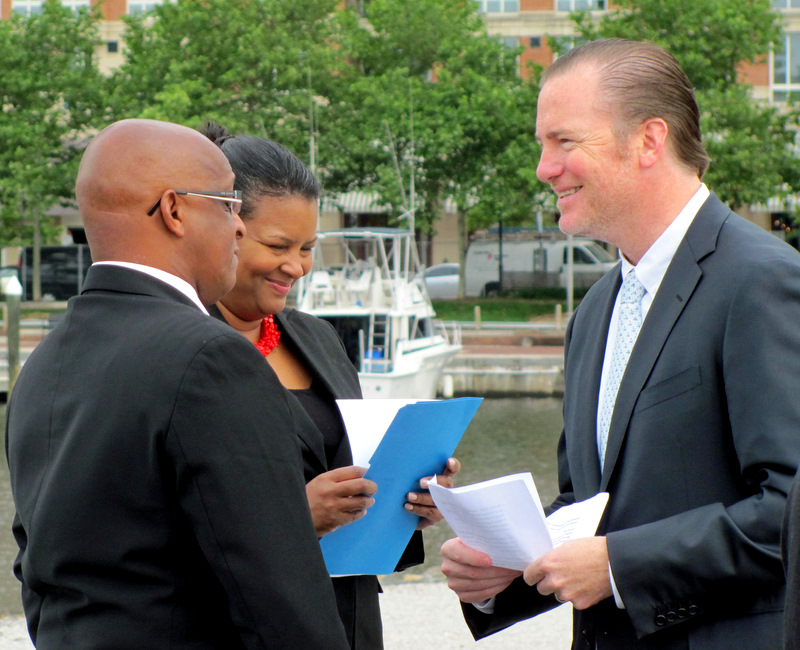 KAGRO and The Korean American Coalition for Fair Zoning kicked in another $1,000.

The Young campaign received $1,000 from strip club manager Kenneth “Kenny Bird” Jackson under his corporate nom-de-plume, Four One Four. (We have more on Jackson’s contributions  to another city councilman here.)

More than $25,000 of the funds raised by Young last year cam from developers.

Two checks, totaling $2,000, came in March and December 2013 from the developer of Harbor Point, book-ending a long and emotional debate in the City Council over the group’s demand that the city contribute $107 million in tax incentives to build parks, roads and other infrastructure for the Exelon Tower and other buildings on the site.

Young fervently backed the tax incentive package, personally making sure it overcame the legislative hurdles thrown in its path by Taxation Committee chair Carl Stokes. While Councilman Stokes said the TIF allocation was far greater than necessary, guaranteeing the developer an uncommonly high profit margin, Young insisted that the project would bring needed jobs to the city.

In fact, while Young refuses to discuss the campaign contributions he collects, he has stated on many occasions that he views his job as increasing employment opportunities for city residents.

A large percentage of the parties he solicits from, however, don’t live in the city. The Brew’s review found only a relative handful – less than 6% – of total contributions coming from people who (a.) live in Baltimore City and (b.) don’t have an obvious vested interest in city government.

Among those we discounted as disinterested citizens were four members of Young’s own immediate staff who wrote checks worth $450 to his political committee, thus becoming “Friends” with their boss.