Mayor Stephanie Rawlings-Blake doesn’t abide by the old saw that the best offense in electoral politics is a fearsome war chest.

After burning through all but $30,000 of the $1.9 million she raised to win a full term as Baltimore’s mayor in 2011, Stephanie Rawlings-Blake has gone on to pick up another $535,465 in political contributions over the last two years.

That’s a lot of money, but it tells only half the story.

Nearly as fast as her political committee has gotten the money, it’s been spending it. Records reviewed by The Brew show that the “Rawlings-Blake For Baltimore” committee has used up $345,276 since January 2012. That’s nearly $2 out of every $3 raised.

While much of the money has gone to the mayor’s fundraising consultant, Colleen Martin-Lauer, there were several other intriguing expenditures. 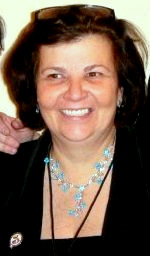 The secretive Colleen Martin-Lauer in an undated photo.

The committee, for example, forked over $29,000 last August to Peter D. Hart Research, a Washington, D.C., pollster for “survey/polling” on behalf of the mayor. Rawlings-Blake is now listed as one of Hart’s few “down ballot” clients who do not hold federal or statewide office.

The mayor’s involvement with such a prominent Democratic Party consulting firm lends credence to speculation that the mayor – who has become a frequent guest on national news programs following her 2013 appointment as secretary of the Democratic National Committee – aspires to higher office.

(She told a Daily Record reporter last month that she plans to run again for mayor, though she seemed reluctant to confirm it at a City Hall news conference.)

Charles G. “Chuck” Tildon, the mayor’s campaign treasurer, did not respond to e-mailed questions about the poll expenditures.

Another $6,100.80 was paid to Kevin R. Harris, a former DNC operative who was hired by the mayor as her $110,000-a-year spokesman. Harris received the check last October 23, according to campaign records, or two months after he assumed his post as director of the Mayor’s Office of Policy and Communications.

Harris said the following when questioned by The Brew: “My consulting work for the mayor was performed before I began my service with the city and did not overlap with my time as policy and communications director. The services I performed touched on a broad range of areas, including communications and campaign strategy.

PREVIOUS STORIES FROM OUR SERIES, “MONEY AND POLITICS IN BALTIMORE”

In addition, $49,859 was spent by the mayor’s committee for “field expenses” over the last two years.

Included on the tab – $6,000 worth of meals at Capital Grille, Ouzo Bay, Silo.5% Wine Bar and other eateries; $3,768 for snacks and drinks at the mayor’s private Ravens skybox at M&T Bank Stadium; and $700 for salon stylists and assistants for mayoral photo shoots.

These and other costs have left the mayor’s committee with just $220,698 at the start of 2014, records at the Maryland Board of Elections show. That’s fully $110,000 less than the cash balance of City Council President Bernard C. “Jack” Young.

Were Rawlings-Blake in the midst of a campaign, such spending would be understandable. But with the next city election not until 2016 – and no declared opponent yet in sight – the mayor’s spending habits go contrary to the usual approach by politicians of “banking” funds in off-election years.

That could change as early as tomorrow, when the mayor holds her first big fundraiser of 2014.

“Rawlings-Blake For Baltimore” is nominally headed by two people close to the mayor.

The committee chair is Lisa F. Rawlings, her sister, while treasurer Tildon, a vice president at United Way of Maryland, is the brother-in-law of mayoral friend and super-lobbyist Lisa Harris Jones.

Campaign funds to the mayor’s committee, however, do not go through Tildon or Lisa Rawlings. They come in through the former Tide soap building in Locust Point, the offices of Martin-Lauer Associates.

Political funds for the mayor do not go through campaign treasurer Tildon, but instead to Martin-Lauer Associates located at the old Tide Building at 1010 Hull Street.

A secretive figure (she’s rarely seen in public and does not talk to the media), Colleen Martin-Lauer has become the premier fundraiser for Democratic Party officeholders in the state and city over the last 15 years.

Although the firm relies heavily on online communications with fundraisers, it does not feature a public website. (She did not respond to The Brew’s request for an interview.) 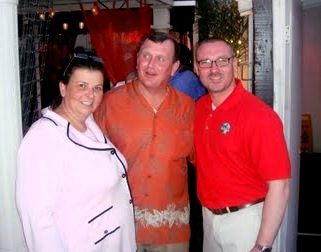 Colleen Martin-Lauer in 2009 with Colm O’Comartun (right), an ex-O’Malley aide who is currently executive director of the Democratic Governors Association. (Maryland Politics Watch)

From her donor database have sprung millions of campaign dollars for Gov. Martin O’Malley, Lt. Gov. Anthony G. Brown, and dozens of other state and city officeholders.

Martin-Lauer joined forces with Rawlings-Blake in 2007 when the mayor faced her one competitive race since being elected in 1995 to the City Council backed by her powerbroker father, state Delegate Howard “Pete” Rawlings.

That was the election for City Council President where Rawlings-Blake was up against the scion of another political dynasty.

With $0.00 in the mayor’s coffers at the start of the race, Martin-Lauer raised over $345,000 to help her defeat Michael Sarbanes, son of former U.S. Senator Paul Sarbanes, according to records on file at the state election board.

From there, Martin-Lauer piloted Rawlings-Blake to a blow-out mayoral victory in 2011 against Catherine E. Pugh, Otis Rolley and Jody Landers, who raised but a fraction of the checks and credit-card payments conjured up by the Locust Point magician. 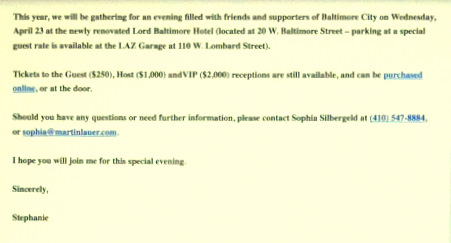 An online invitation by “Stephanie” to buy $250 to $2,000 tickets for her fundraiser tomorrow. Note the contact person for donors is Sophia Silbergeld, senior associate at Martin-Lauer and a former aide to U.S. Sen. Ben Cardin.

Martin-Lauer has been reaping the rewards ever since.

Typically a fundraising consultant receives no more than 8% of the take. In his campaign for governor, Anthony Brown’s political committee paid Martin-Lauer $118,643 in 2013 – or 3% of the $4 million the committee raised through her efforts.

Campaign records indicate that Martin-Lauer is on a monthly retainer of about $7,500 from the mayor’s political committee.

MARK REUTTER can be reached at reuttermark@yahoo.com.