Baltimore’s two top elected officials took opposing positions over the value of a city subsidy for Steve ESPO Powers’ “Love Letter to Baltimore” murals, as the Board of Estimates postponed a scheduled $27,500 allocation for the project.

“I am going to be very simple – a waste of taxpayer dollars,” City Council President Bernard C. “Jack” Young said of the project by the New York artist who has a world-wide following.

Before today’s meeting, Young told reporters he would oppose using city funds to pay for a Powers mural on the Fitch Building in South Baltimore, the first of five to 10 murals the city has asked Powers to paint featuring his use of boldly-lettered words inspired by advertising, irony and conversations with local residents.

The item was deferred for a week after City Comptroller Joan M. Pratt said she had not been briefed about the project, which The Brew described in detail yesterday.

At her weekly news conference, Mayor Stephanie Rawlings-Blake defended the city’s sponsorship of Power’s “FOREVER TOGETHER” signage across East Baltimore rowhouses scheduled to be demolished next month.

Completed last week as a “pop-up” introduction to his larger project, the mural met with a mixed response from residents, some of whom had lived in the very houses being painted.

“Just as Worthy for Beautiful Art”

Asked today if she understood concerns about sponsoring a mural on soon-to-be-razed buildings, the mayor replied, “Some people believe that if you have an area in transition, there’s no value in beautifying that area or enhancing that area or for investing in that area with art.”

“I believe differently. I believe that an area in transition is just as worthy as any other area to receive beautiful art to improve the quality of life for citizens.”

Asked to respond to Young’s criticism of the project as frivolous, the mayor said, “I am a supporter of art. I am a believer of the transformational power of art in our community.” 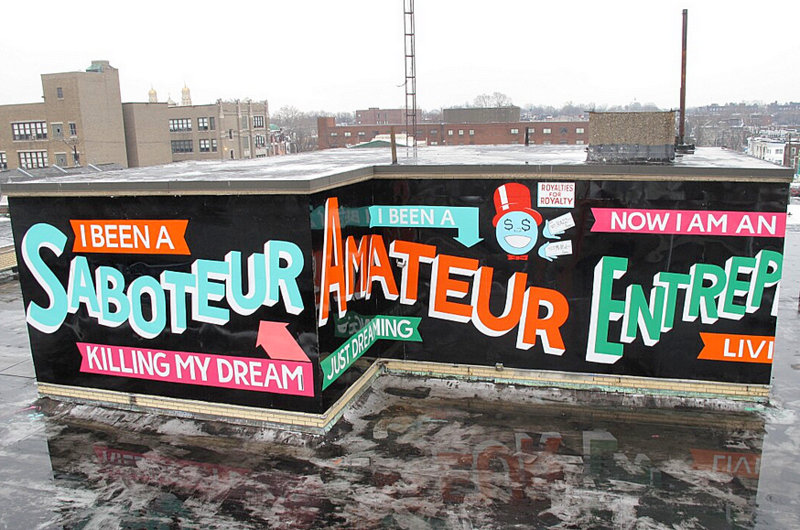 From a photo on Tumblr of Steve Powers’ “Love Letter to Philadelphia.”

She continued, “I grew up with art education and am blessed because of it. We studied art in elementary school, middle school, in high school.”

“We studied music, and it wasn’t a waste of my time. You’ve seen it – whether you look at poor kids or some of the programs that do the performing arts as supplemental education – it transforms lives. And I believe visual art does as well.”

The mayor acknowledged that public art in Baltimore is mostly funded by private grants with some city money. She praised PNC Bank for being a supporter of public art.

The Powers mural project has been budgeted for about $50,000, with funds to be allocated to the Baltimore Office of Promotion and the Arts (BOPA) by the Baltimore Development Corp. and city housing department.

Powers said he was paid only $1,000 for last week’s “pop up” mural, which he said he will donate to the local community association.