Mayor Stephanie Rawlings-Blake will serve in her new position as vice president of the U.S. Conference of Mayors at the group’s 82nd annual conference held this year in Dallas.

The mayor will fly to Texas with an assistant, Andrew Smullian, on Thursday to help kick off the conference Friday morning and is scheduled to return to Baltimore next Tuesday.

The trip will cost $4,762, according to city records. That amount, which comes from the general fund, does not not include the cost of police protection.

Typically, a plainclothes officer accompanies the mayor on out-of-town trips, often arriving a day ahead of time and securing a rental automobile. Police costs have not yet been submitted to the Board of Estimates.

The conference, which will include over 200 mayors from large and small cities, will hold breakout sessions on education, transportation, helping returning veterans and the minimum wage. 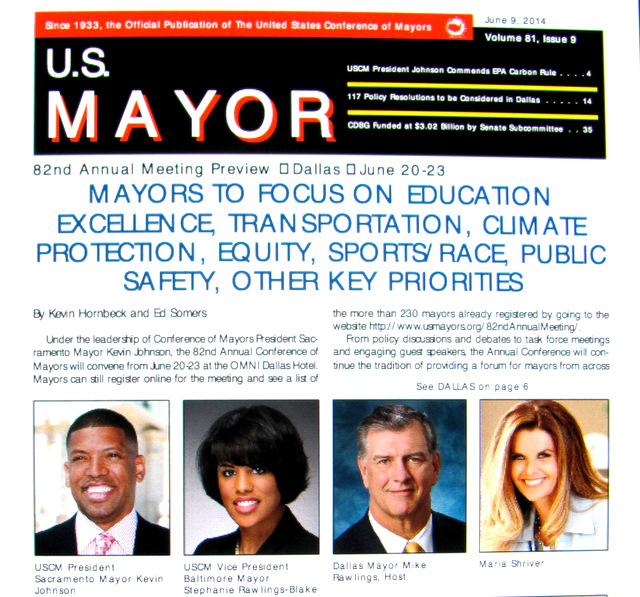 Among this year’s line-up of dignitaries at the annual mayors’ gathering. (U.S. Conference of Mayors)

The group will also hear from Maria Shriver, discussing what mayors can do to help “the one in three American women on the brink of poverty,” and from NBA all-time leading scorer Kareem Abdul-Jabbar during a special session on “Sports, Race and Politics.”

Rawlings-Blake is in line to become president of the conference next June, when another NBA great, Kevin Johnson – who is mayor of Sacramento – is due to complete his term as president.

The sponsors of this year’s conference include Citibank, Pepsi, 7-Eleven and Wells Fargo, and the host will be another Rawlings – Mayor Mike Rawlings of Dallas.