There have been many rationalizations for getting rid of the imposing McKeldin Fountain in the Inner Harbor, but improving traffic should not be among them.

A central element of the city’s plan known as Inner Harbor 2.0 is to widen southbound Light Street (where the fountain now stands) from five to eight lanes to accommodate diverting the Calvert Street northbound traffic.

But there’s a far better traffic fix available that would not involve any widening and would present the fountain in a whole new light.

Right now, the McKeldin Fountain is basically the back end of the impenetrable Light Street median strip that isolates the Inner Harbor from the downtown areas to the west.

Inner Harbor 2.0 would widen what is now southbound Light Street to concentrate the huge traffic flow and create a larger plaza adjacent to Harborplace, but at the same time create an even more impenetrable barrier to the west.

What is really needed is to tear down the impenetrable barrier, not the fountain.

The Inner Harbor also needs simple local streets to create an urban environment and unify it with the surrounding city. 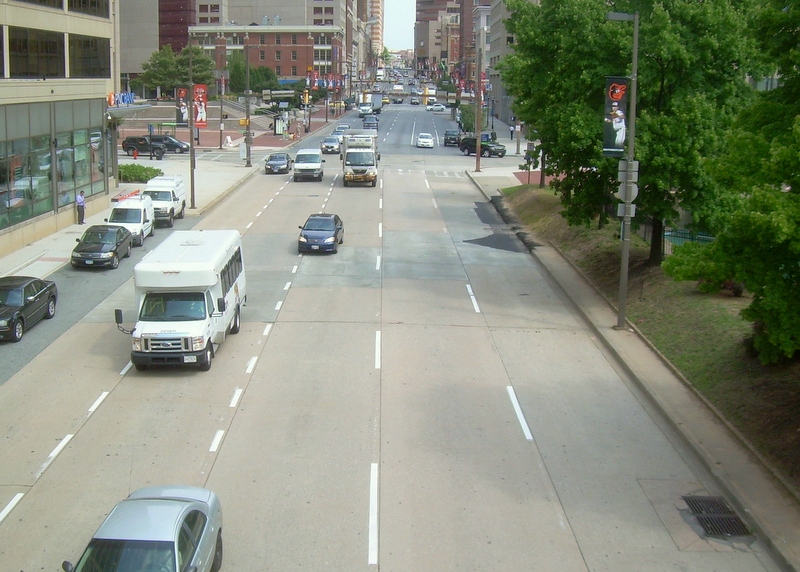 The lack of local streets in the Inner Harbor creates a stark contrast and awkward transition to the downtown street system north of Pratt Street as well as the street system south of Key Highway to Federal Hill.

Despite these obvious flaws, city boosters get pumped up with blue-sky optimism whenever they talk about more Inner Harbor plazas.

Creating large “superblocks” seems to be the city’s other reason for removing the McKeldin Fountain. “It looks bad,” opines Downtown Partnership President Kirby Fowler. “The sooner we can take it down the better.”

The same instinct motivates the 2.0 plans for the west side park south of Harborplace and for Rash Field, where a new park-like plaza would be built on top of a parking deck. 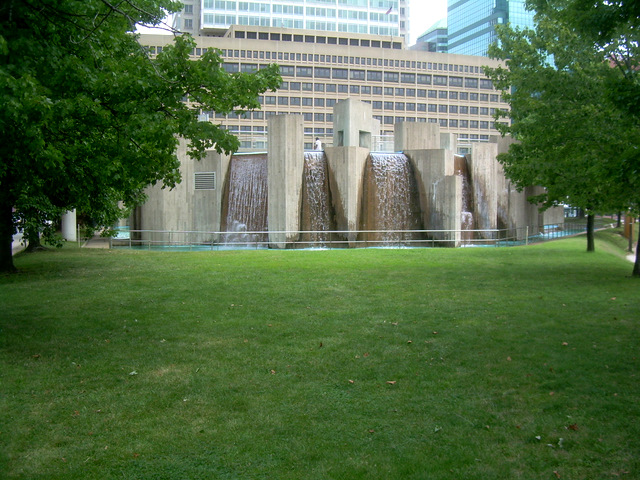 The rear of McKeldin Fountain is landlocked in the median strip. This design flaw would be corrected with a “local” Calvert Street. (Photo by Gerald Neily)

But the designers seem oblivious to the need to instill meaning in these plazas by carefully defining their edges.

The west side park would be bordered by the same gigantic human-dwarfing Light Street as their proposal to replace the McKeldin Fountain. And the thinking behind the new Rash Field plan is similar to the existing concept, except ten feet higher and with no more of the popular volleyball courts.

Baltimore seems to be one of the last cities on earth to realize what Jane Jacobs was teaching over a half century ago – that superblocks only create super-sized empty spaces that dilute and discourage spontaneous activity.

Simply convert what is now northbound Light Street between Key Highway and Pratt Street on the west shore of the Inner Harbor into a two-way extension of Calvert Street.

This street would also be a seamless natural extension of the current properly-scaled Light Street south of Key Highway through Federal Hill, replacing the bizarre transition that occurs at Key Highway which the city wanted to convert into an even more bizarre pedestrian-hostile roundabout. Essentially, Light Street in Federal Hill would become Calvert Street in the Inner Harbor.

Meanwhile, what is now southbound Light Street would only exist north of Conway Street and be converted to two-way flow. It would have only two southbound lanes that would be forced to turn right into Conway.

The other three lanes would be used only by northbound traffic turning left off of Conway. These are the two biggest traffic flows on these streets, and accommodating only them and no other traffic flows on this segment of Light Street would eliminate the conflicts which cause congestion. 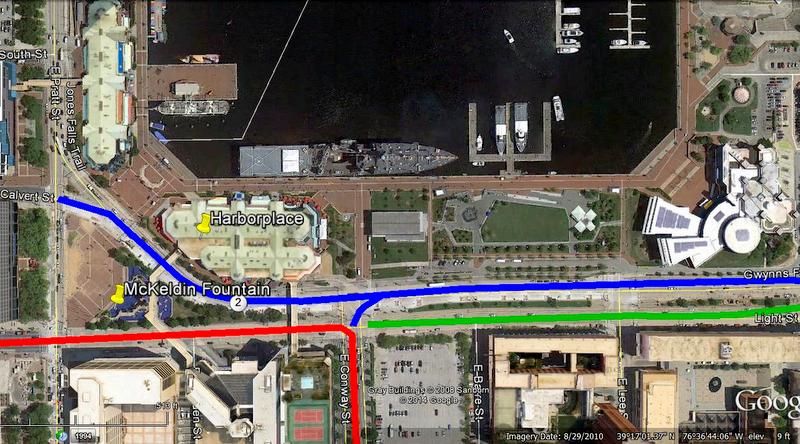 This means that whenever the now-lethal traffic signal at Light and Conway turns red, all traffic would stop and pedestrians could walk anywhere, just like the old “Barnes Dance” signals originated by traffic planner Henry Barnes in the 1950s.

The north crosswalk on Conway, the one that actually goes through to Camden Yards, could be reopened. Another new crosswalk could be created midway on Light Street between Conway and Pratt. This plan would also enable the traffic signals to be far better optimized – not for maximum speed and capacity but for the ideal speed and capacity.

The current over-sized Light Street would become two two-way streets, the western one for through traffic between Pratt, Conway and I-395, and the eastern one adjacent to the Inner Harbor for local traffic.

The two Light Streets would no longer be defined by a dead median strip. Thus, the south side of the McKeldin Fountain could be opened up to become a pedestrian place.

Moreover, the space currently occupied by southbound Light Street south of the intersection of Conway would be freed-up to be used for whatever local Inner Harbor activity the urban designers want of it, served by the new locally-oriented Calvert Street. This would be especially beneficial for the vacant former McCormick site just south of Conway for which yet another grandiose development plan was recently announced.

Having a civilized Calvert Street adjacent to the Inner Harbor has other benefits as well: The west pavilion of Harborplace could be given an active functional street-oriented frontage, and those ugly loading docks could be replaced with ordinary garage bays.

Calvert Street could also become a great place for a streetcar line. And the entire McKeldin Plaza could be saved. It’s really a very well designed space. Only its perimeter streets are wrong.

Try Before You Buy

Best yet, the city could try all this out with far less effort that it had expended to turn Light Street into a Grand Prix raceway. A bunch of orange barrels and cones would basically do the trick, along with a few temporary signs and traffic signals.

Lee Street should also be converted to two-way flow between Light and Charles Street to provide a way around the area – something that should have been done many years ago.

And special attention will need to be given to Pratt Street at the northern end of this area, which will serve as a mixing bowl of sorts, although to nowhere near the same extent as in the city’s Inner Harbor 2.0 plan. A “try-out” phase would be especially helpful in deciding what kind of permanent changes should be made to Pratt Street as well as to Light and Calvert north of their Pratt intersections.

Most likely, it would be advantageous to extend the two-way portions of Light and Calvert Street north of Pratt Street, as the city is already contemplating extending the transition zone.

This would be more feasible under this plan, which spreads the traffic, than if Light Street was widened so that eight lanes of traffic would have to make the transition.

Worth Trying on Pratt, Too?

Separation of local and through traffic may become so successful on Light Street that the same kind of treatment may be desired on Pratt Street, which also has plenty of room for it.

At the outset of the Inner Harbor 2.0 planning process, Ayers Saint Gross got plaudits for its plan to widen Pratt Street into the same kind of monster two-way boulevard as Conway Street, but the city later came to its senses and killed it. Something superficially similar, but devoted to separating local and through traffic, could easily be done.

Again, this would be ideal for a streetcar line as soon as the powers-that-be come to their senses and scrap the unaffordable Red Line tunnel 70 feet under Lombard Street.

What they need to realize is that grandiosity is not always good. Sometimes the best solution is to simply orchestrate the activity patterns a city already has.
_______________________
Gerald Neily is a former transportation planner at the Baltimore Department of Planning. 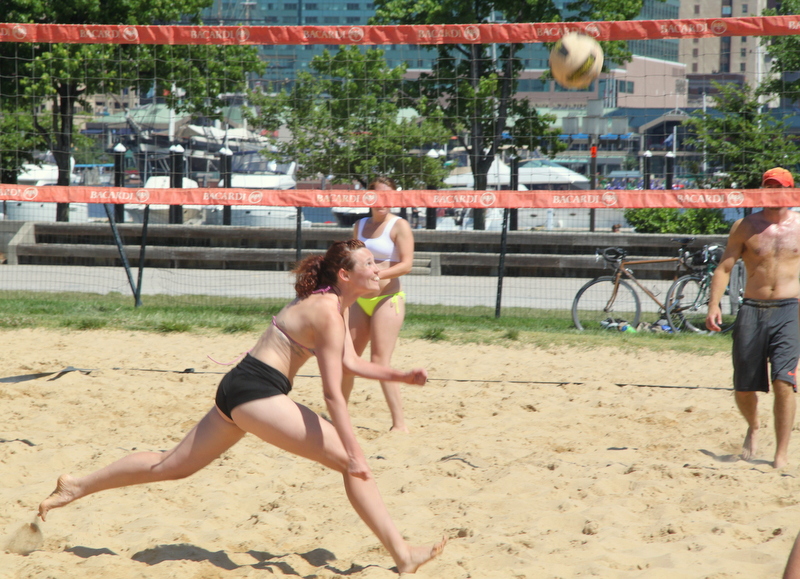 Under the Inner Harbor 2.0 plan, Rash Field would sit higher atop an underground parking garage and no longer have beach volleyball. (Photo by Fern Shen)