CSX Transportation has agreed to pay up to $10 million to Baltimore for costs associated with rebuilding the 26th Street wall that collapsed last spring, sending cars and half of the street tumbling onto the railroad below.

In a memorandum of understanding released by the city this evening, CSX said it will contribute “up to 50% or $10 million to the costs of the repairs” and further agreed to share “the costs of any and all third-party lawsuits relating to the event.”

After the wall broke apart on April 30 following heavy rains, residents on the unit block of East 26th Street complained that the city and CSX had ignored their warnings that the 100-year-old wall was unstable and cracks were showing on the street.

Rebuilding the caved-in street was originally estimated at $18.6 million, but may come in lower than expected. Last month, the city paid $12 million to Concrete General Inc., which has completed the temporary wall and is now building a permanent wall to hold the street some 40 feet above the CSX freight line.

Some of these funds are now expected to be reimbursed by CSX under the settlement, which will go before the Board of Estimates on Wednesday for certain ratification.

While reconstruction of the retaining wall has gone more smoothly than some officials expected, unpublicized costs are plaguing a highway bridge over the same CSX line a few miles east.

The city Department of Transportation concedes that the Sinclair Lane Bridge at Edison Highway (a complicated junction above the rail line) is experiencing substantial cost overruns. 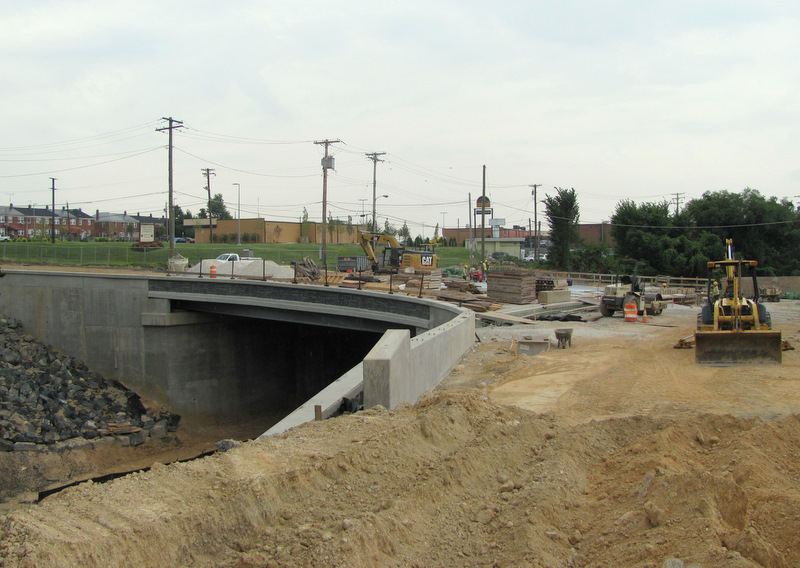 The Sinclair Lane Bridge, which crosses the same CSX line involved in the 26th Street collapse, is unfinished and running above expected costs. (Photo by Mark Reutter)

“There are change orders associated with this contract. We cannot say how much at this point,” Adrienne Barnes said in response to Brew queries about the status of the bridge, which was scheduled to reopen at the end of 2013.

The 1930 concrete bridge had been crumbling for years when CSX entered into an agreement with the city to shoulder 75% of the cost of a new bridge. A contract for $5.7 million was awarded by the Board of Estimates to Concrete General after the low bidder, Lane Construction Corp., said it had erred in its calculations and asked to withdraw its $4.6 million bid.

After construction began, it was discovered that “the south abutment and wing walls were unstable and tilting forward toward the railroad track,” according to DOT. “These repairs required red-line revision and additional contract time, which created the need for additional flagging/inspection services.”

As a result, the city agreed to pay an additional $634,464 to CSX for inspection and train-flagging.

When the bridge’s final bill comes in – which isn’t expected for another year – the city will be responsible for 25% of the cost, which will be largely covered by federal and state highway funds, according to Barnes.