After encountering stiff opposition from a Baltimore community to an intermodal rail-and-truck facility, Maryland officials announced yesterday they are pulling all state funding from the project and terminating their agreement with CSX Transportation.

It was a dramatic turnaround from a year ago when the administrations of Gov. Martin O’Malley and Mayor Stephanie Rawlings-Blake seemed united in their desire to bring the 40-to-50-truck-per-hour operation to Morrell Park in southwest Baltimore.

But residents from this blue-collar community, who combined home-made signs and door-knocking with social media and political bridge-building, say their own resolve ultimately won the day.

“A lot of people counted us out,” said Morrell Park activist Laurie Weishorn. “They thought to themselves, ‘It’s lower-middle-class, the value of the homes is not that great, they’ll just give in if we throw a lot of money at them.’”

“Ecstatic” about the decision, Weishorn said the community’s reversal of fortune was perhaps best dramatized by the fact that Rawlings-Blake personally called community leaders to give them the news.

Back in 2012, Rawlings-Blake invited CSX to put the facility in the city after more affluent suburban communities had rejected it. Last November, she touted the project during a Panama Canal trip with Vice President Joe Biden, angering Morrell Park by appearing to ignore their concerns.

“The mayor herself called the presidents of the community associations,” Weishorn said. “That is pretty impressive.”

MDOT: Disappointing for All Concerned

The Maryland Department of Transportation announced in an emailed release that $30 million in capital funding for the rail project (and the remaining balance of $1.45 million in planning funding) will not be included in the agency’s draft six-year budget.

“CSX has worked to develop an intermodal transfer facility that balances the needs of the community, the State of Maryland, the City of Baltimore and the railroad for five years without success. This is very disappointing for all concerned,” said Maryland  Transportation Secretary James T. Smith, Jr.

“But we remain deeply committed to working with all stakeholders to develop a long-term solution that brings double-stack capacity to the State and enhances the competitiveness of the Port of Baltimore,” Smith said in the release.

State officials have said the $90 million facility was needed to expand the double-stack rail capability of the Port of Baltimore’s Seagirt Marine Terminal in order to take advantage of increased activity due to the Panama Canal expansion. The rail-to-truck transfer facility was needed to get freight around the low clearance of CSX’s aging Howard Street tunnel.

Opposition to putting the facility at CSX’s Mount Clare Rail Yard in Morrell Park intensified after the company disclosed the large number of trucks and shipping containers expected to be handled there.

Adding to the unsavory details about truck traffic, fumes, and noise from the 24-hour operation was the clumsy way the information was delivered. 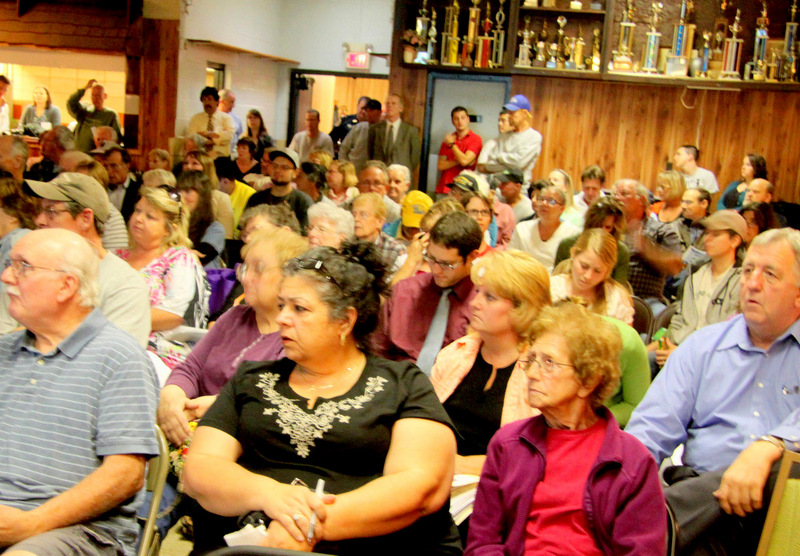 A September 2013 meeting with city, state and CSX officials that some say galvanized the community to fight the project. (Photo by Fern Shen)

City, state and CSX officials tried to keep the residents at a public meeting from speaking, directing them to take their questions individually to bureaucrats stationed around the room.

Rob Doolittle, a spokesman for CSX Transportation, said yesterday that the company “remains committed to leveraging intermodal freight as a competitive advantage for the Port of Baltimore.”

“We continue exploring with the state, the Port and Ports America an approach that maximizes the available resources to strengthen Baltimore’s leadership position as a key facility in the U.S. east coast freight network,” said  Doolittle, communications and media relations for CSX’s  Northeast Region.

“At the same time we have heard the concerns of residents and businesses in several communities and want to be responsive to the issues raised,” he said. “We are working toward a solution that will benefit everyone involved.”

As for what that solution could possibly be, state DOT officials vowed to find one over the coming year by working “with stakeholders to assess the feasibility of other initiatives that could improve freight movement through Baltimore.”

With no clear solution on the horizon, the best Maryland Port Administration Executive Director James J. White could say is “we are viewing this as an opportunity to regroup and come up with a better alternative.”

“It is in Maryland’s and the local economy’s interest to keep looking for a long-term solution that will provide double-stack access for all freight railroads servicing Maryland’s marine terminals.”

As for the political fallout from the Goliath-vs.-David loss, that question is murky as well. Some of the mayor’s more recent statements have hinted she had the community’s interest at heart all along.

“I made clear from the start, I wanted a project that was compatible with the neighboring community,” Rawlings-Blake said. “While I support the continued strength of industry at the port, it can’t be at the expense of our residents and local businesses.”

During the gubernatorial primary, Attorney General Douglas F. Gansler and Lt. Gov. Anthony Brown remained silent on the CSX facility, in contrast to Heather Mizeur, who went to the community to offer opponents full-throated support.

In Morrell Park last night, residents were crowing about the victory online.

“We won girl!” wrote Mary Jo Scardina-Bush, president of the Morrell Park and St. Paul Improvement Association. “I can’t believe it. It just goes to show if we stick together we can do anything.”

There was also relief because so much at stake for the struggling community. “If that thing had happened, we would have been finished as a community,” Weishorn said. “We were going to become a sacrifice zone,” added resident Paul DeNoble.

Larry Durkin, another local resident who worked  on the opposition campaign, said he was a bit too preoccupied to compose his thoughts for a reporter.

“We’re too busy celebrating with copious drinking involved,” he said.