Caesars’ failure to turn a profit on its casino empire for five years running was not a topic to be broached at the glitzy grand opening of the Horseshoe Baltimore last month.

Hours before a Wall Street analyst advised clients that Caesars Entertainment Corp., operator of the new casino, could wind up in bankruptcy court, the company had hosted a star-studded celebration at its South Baltimore facility.

As the champagne flowed and showgirls fluttered about, guests at the August 26 reception heard speeches by Gov. Martin O’Malley and Baltimore Mayor Stephanie Rawlings-Blake lauding the 1,700 new jobs at the casino and hoped-for property tax relief from future gambling revenues.

They were entertained by Australian pop star Iggy Azalea and rubbed shoulders with celebrity chefs Guy Fieri and Duff Goldman.

But given the lawsuits by bondholders charging Caesars with a battery of fiduciary lapses, perhaps the most revealing feature of the evening was a gravity-defying performance of “vertical dancing” by a California troupe. 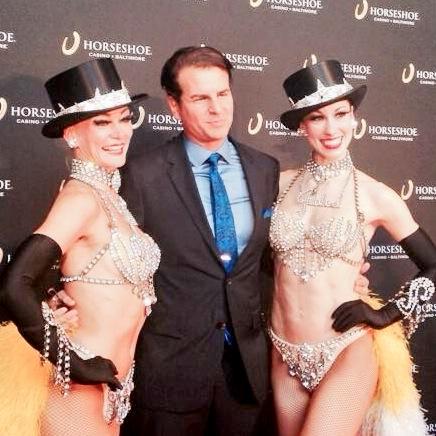 A scene from the opening night festivities at Horseshoe Baltimore. (Tweeted by insidelooktvmagazine)

After all, skirting around the company’s financial problems has been something of a parlor game among local officials since the company applied for a license to open the slots hall on the site of a former chemical factory on Russell Street.

This was the second go-around for Baltimore after Canadian homebuilder Michael Moldenhauer’s plan for a casino was rejected by the Video Lottery Facility Location Commission in 2009.

Caesars’ application came on September 23, 2011, shortly after it signaled its intentions by writing a $4,000 check (the legal maximum) for Mayor Rawlings-Blake’s campaign for mayor. (We wrote about the contribution in this post.)

Caesars’ sheer bulk – operating 50 casinos on four continents – was apparently enough to impress local and state leaders that Baltimore was getting a sure winner.

In its formal presentation to the panel on November 14, 2011, Caesars’ top brass discussed their commitment to urban neighborhoods (“to make them vibrant places to live and work”), environmental sustainability success stories (“reduced water consumption in laundry facilities”), their unique customer loyalty program, their dedication to minority hiring, their concern about “problem gaming” – in fact, just about everything except the company’s recent financial performance.

Tucked away in an appendix on page 46 of the 47-page presentation was a chart (invitingly titled “Reconciliation of Net (Loss)/Income to Property EBITDA TTM Q3”) that gave a snapshot of Caesars’ deteriorating operating condition. 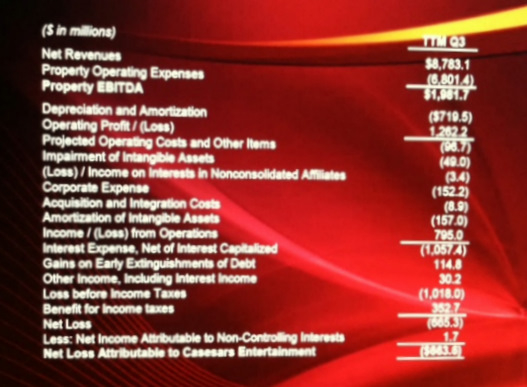 In its presentation to the state, Caesars disclosed its heavy operating losses for 2011 in this appendix entry. (Download of presentation)

It showed the company had a $1.018 billion loss through the third quarter of 2011 before income taxes.

After Uncle Sam credited the company with more than $350 million in tax benefits, the company reported a net loss of $665.3 million.

But no one on the commission apparently took notice.

Unanimously approving the application in July 2012, the panel praised the Caesars group for “possess[ing] sufficient financial and business resources to operate a successful video lottery facility.”

At that point, the state stepped aside and negotiations for the disposition of land for the casino and its parking garage was placed in the hands of the quasi-public Baltimore Development Corporation (BDC). 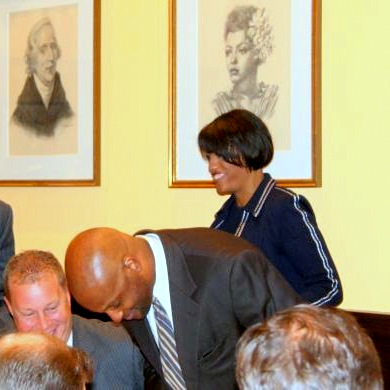 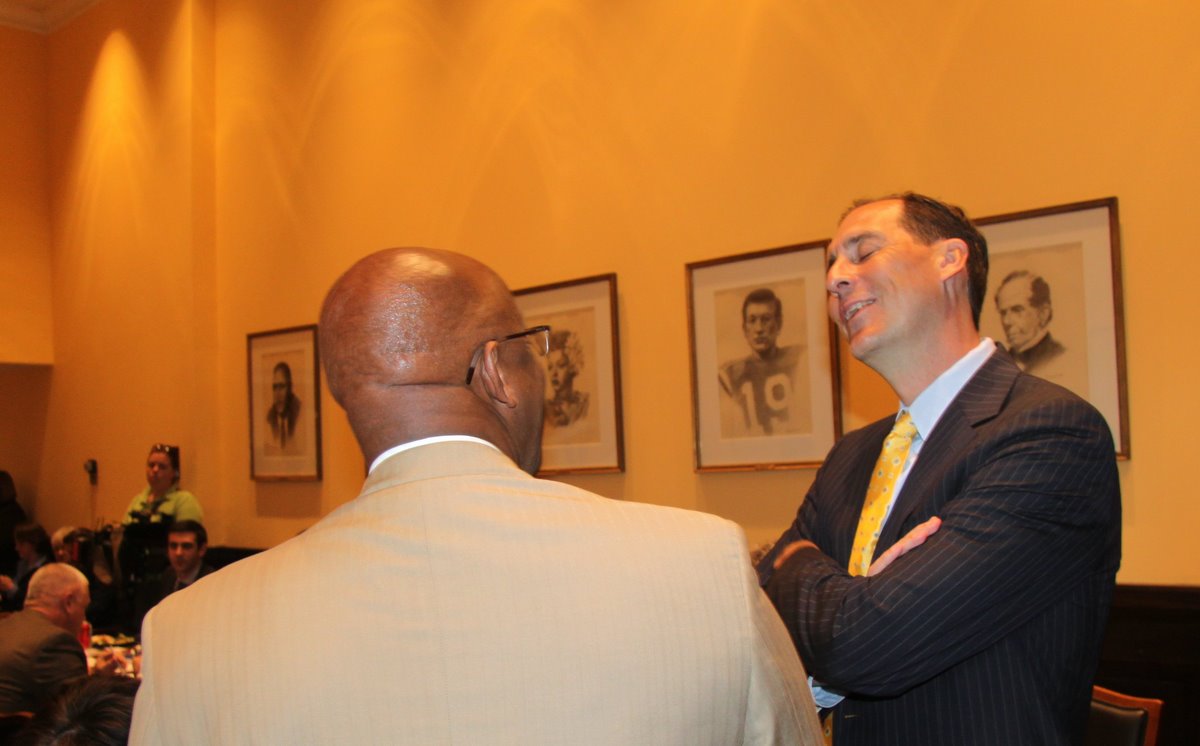 The upshot was hundreds of pages of land-lease and property sale agreements that held some winning cards for Caesars.

The city, for example, sold land along Warner Street for a casino parking garage for $5.9 million, but allowed CBAC Gaming (the casino’s corporate entity) to pay only $1.2 million at settlement, with the remaining $4.7 million due in 2017 in a lump sum payment without interest.

The agreements, signed in the fourth quarter of 2012, came as Caesars’ losses ballooned by $810 million from the previous year and reached slightly under $1.5 billion after tax benefits.

Caesars blamed Hurricane Sandy for many of its problem, including the loss of gaming dollars at its Atlantic City casinos. But most striking about the financials was that, despite the opening of a new Horseshoe casino in Cleveland, revenues had crawled up by only $13.4 million – and almost all of it due to “higher revenues from the company’s online businesses.”

In other words, Caesars’ regional casino revenues were turning flat, or in the case of Atlantic City shrinking, just as Baltimore was formally inking its deal with the company.

But that didn’t stop either Caesars or City Hall. At groundbreaking ceremonies for the casino in May 2013, Mayor Rawlings-Blake stood beside Caesars’ chairman and CEO Gary Loveman to hail the casino as the best thing to happen to Baltimore since she proclaimed the Grand Prix race (now discontinued) an economic “game changer.”

“Horseshoe brings with it the promise of a new day,” she said, whereupon she and Loveman threw a pair of jumbo-sized red dice down a craps table to the sound of clapping hands and clicking cameras.

But the roll of Caesars’ financial fortunes only went from bad to worse as the slots palace took shape on Russell Street. The company’s losses for 2013 doubled from 2012 – hitting a staggering $3 billion. 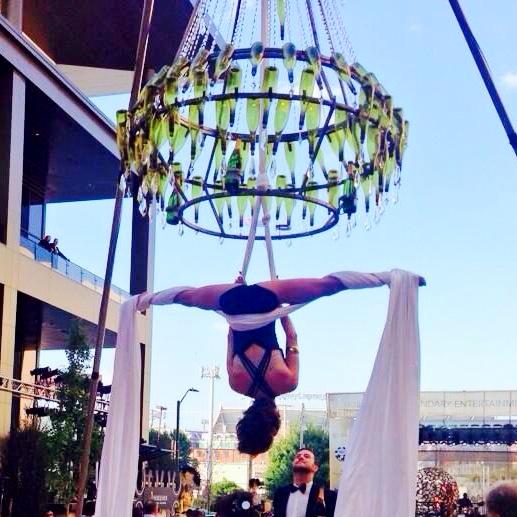 Loveman and the Caesars team undertook various restructurings of the company, spinning out new entities that have been challenged by some bondholders as the “fraudulent” siphoning off of the company’s more profitable assets.

Two weeks before Caesars opened Horseshoe Baltimore, it again shocked investors by reporting a net loss of $466 million in the second quarter of 2014 – double the $212 million loss in its (miserable) 2013 quarter.

The per-share loss of $3.24 per share was almost triple the consensus estimate of a $1.19 per share loss for the quarter.

Such news should have put a damper on the grand opening celebration of August 26. In any other kind of business, it probably would. But gambling is a world of hopes and dreams and illusions. Another roll of the dice and your problems will magically go away.

As a master at scientifically tracking and satisfying its customers’ desires, Caesars made people happy that night. Maryland’s political leaders, mesmerized by the easy money they were sure would soon be flowing down Russell Street, weren’t about to break the spell.
____________________________________________
PART 3: A mathematics prodigy from Indiana (via MIT and Harvard) leads Caesars down the path of expansion – and debt.