Here’s a plot fit for a Hollywood movie: A Harvard Business School professor goes to Las Vegas and conquers “Sin City” not by a display of Tony Soprano muscle, but by hiring math geeks and computer jocks to plumb the depths of millions of everyday gamblers.

With the earnings from his ingenious customer loyalty system, he borrows billions to buy other casinos and expand to states newly opened for gambling, only to find his customer base has shifted and shrunk, and his winnings gobbled up by overhanging debt.

He restructures, dumps the debt on the parent company and forms new entities to hunt for virgin markets. Among them: a proposed $2.2 billion casino complex in South Korea and a $5 billion network for Japan if the government passes a law legalizing gambling.

In a nutshell, that’s the unlikely story of Gary W. Loveman, chairman, president and CEO of Caesars Entertainment Corp., the operator and major owner (through convoluted corporate interlockings) of the new Horseshoe Baltimore on Russell Street.

What makes his story so ripe for a Hollywood scriptwriter – and so potentially problematic for a city like Baltimore counting on long-term casino revenues to lower its property taxes and fix its schools – is that Loveman insists that all of his actions are based on logic and mathematics.

“I am purely empirical,” he told a Bloomberg reporter a few years ago, confessing that he rarely gambles or even hangs out at his casinos. “I am not attached to any romantic notion of how this business should be run. I am only driven where the evidence takes me.”

Growing up in Indianapolis, Loveman was a math prodigy, but – tall and competitive by nature – he proved to be good at basketball, too. He graduated from Wesleyan University and took a PhD in economics at MIT after working as a researcher at the Federal Reserve Bank. 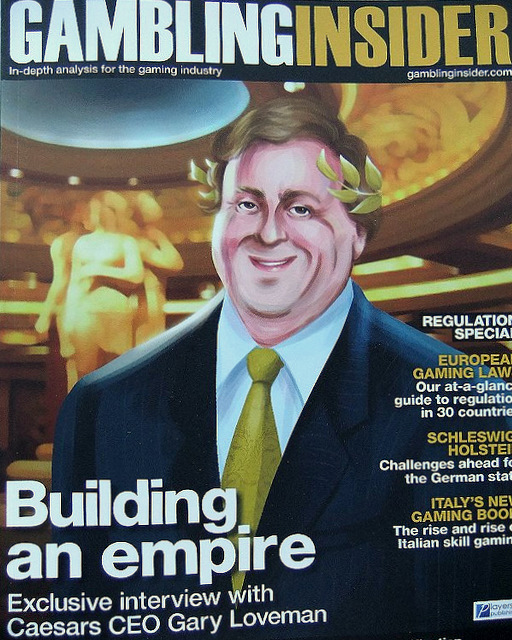 Hired by Harvard at age 29, he taught M.B.A.’s how companies like McDonald’s and Wal-Mart boosted profits by paying close attention to their customers’ needs and desires.

He developed a theory about all this: Customer satisfaction was not just feel-good stuff; it could create real and quantifiable financial value.

He co-wrote a paper in the Harvard Business Review that attracted lots of corporate consulting work, including from a low-brow casino operator in Memphis, Tenn.

Loveman’s models and analyses told him that repeat slot players, not high rollers, were most profitable. The challenge, he determined, was to build customer loyalty.

So he established a “Total Rewards” program where gamblers inserted plastic cards into slot machines to record their play, allowing them to pile up points to get perks.

A computerized tracking system sorted this data – game preferences, number of trips to the table, length of each session – and combined it with age, gender, zip code and other factors to assign each customer with a predicted value of how much they were expected to lose each time they entered a Harrah’s property.

A $626 customer was worth more to Loveman than a $372 customer. But both were more valuable if they could be reeled back to the casino more often with targeted offers and “come-back-soon” inducements.

The marketing research yielded other insights. Females were more regular gamblers than males, and older women the most lucrative demographic of all. What’s more, “happiness” and “spending” went hand in hand among all groups. The more pleasant their experience at a Harrah’s casino was, the more cash people would surrender to the house.

Loveman had hit upon a form of “customer relationship management” so slick that few gamblers realized that they weren’t playing blackjack or the slots so much as the slots and table games were playing them.

Piling up Casinos and Customers

In 2003, Loveman was named CEO of Harrah’s. What was once considered a two-year sabbatical from the ivory tower had become his full-time gig. 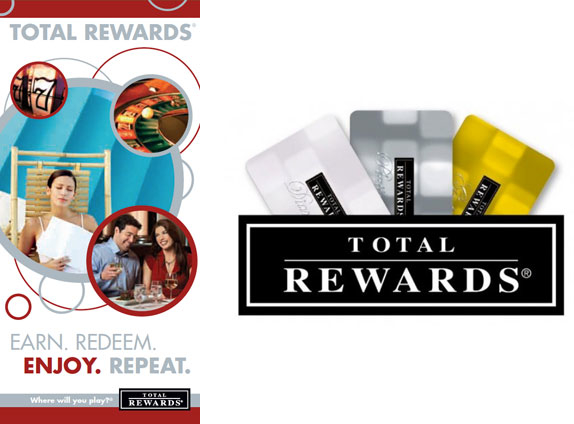 Loveman established a Total Rewards program to encourage customers to return “happy” to the gaming tables. (Download from Caesars Entertainment)

Even after the company moved its headquarters to Las Vegas, Loveman kept his residence in Boston, which he commuted to on weekends on a corporate jet.

But, otherwise, he was in the thick of an industry boom.

Elaborate piles of construction rose along Sunset Strip, while much more prosaic casinos and slot halls were erected in small-town America as more state legislatures opened up the country to gambling.

In 2004, Harrah’s snapped up the World Series of Poker and three casinos from Binion’s Horseshoe for $1.5 billion. The next year, Loveman made a successful bid for Caesars. That $9.4 billion purchase made Harrah’s the biggest casino operator in the world – and added 10 million customers to Loveman’s database.

Wall Street was well pleased by other talents shown by the former professor. His glib tongue and impassioned delivery style were sanitizing an industry long stained by allegations of mob influence and of customers gambling away their children’s milk money.

Loveman insisted that the business was like that of any mass marketer. M.B.A.s schooled in best practices and spreadsheet skills, not some cigar-chomping capo from Chicago, were running the show. And going to a casino was really no different than taking the family to the movies on Friday night. Instead of paying an admissions fee, he told Newsweek, you pay for the fun and emotional thrills with lost wagers.

Wall Street became so enamored with Loveman – and Loveman so pleased with himself (“My sort of logic excels at things like acquisitions or expansions or developments,” he told Bloomberg) – that two of the nation’s biggest private equity funds took Harrah’s private in a $30.7 billion leveraged buyout in 2008. Stockholders received $90 a share as the company’s debt load rocketed to $27 billion. 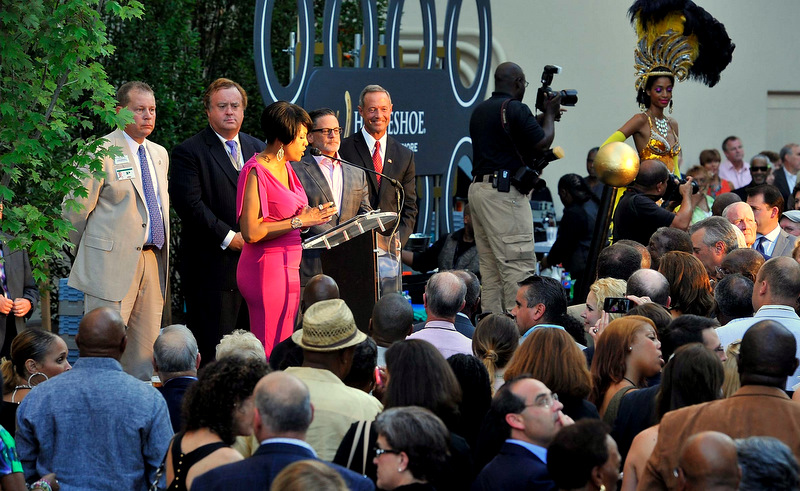 Gary Loveman stands next to Mayor Rawling-Blake at last month’s opening of Horseshoe Baltimore. To his right is casino manager Chad Barnhill. To the mayor’s left is Dan Gilbert of Rock Gaming, a Caesars’ partner, and Maryland Gov. Martin O’Malley. (Photo by Larry French/Getty Images)

Loveman and his new partners planned to take the company public in a few years and rake in billions in management fees, carry charges and IPO profits. But, suddenly, all the probabilities he and his team had calculated were upended.

The financial crash of 2008 took down Lehman Brothers and required massive public bailouts of the nation’s mega-banks. In this environment, the odds of off-loading Harrah’s debt to the public was a long shot.

In 2010, Loveman oversaw Harrah’s transition to the name Caesars Entertainment Corp. in an effort to prepare the company for an initial public offering. In 2012, the company managed to complete an IPO of about 2% of its shares.

Instead of using the money to pay down outstanding debt, Loveman plowed most of it back into expansion. Enamored with the notion that “urban casinos” were the next big thing, Caesars opened Horseshoe-branded casinos in Cincinnati and Cleveland and pushed into the Maryland market, successfully securing a license to build Baltimore’s first casino in July 2012.

On the surface, Caesars was on its way to establishing a nationwide network of casinos. But underneath the glitter there wasn’t any gold. The company hasn’t made a profit since 2009. Last year, it lost a staggering $3 billion.

Loveman still insists to reporters and state regulators that Caesars is poised for a bright future. He dismisses talk of a pending “liquidity crisis” and says a bankruptcy court filing is not in the cards.

The problem is that fewer and fewer investors believe him. As described in Parts 1 and 2 of this series, Caesars faces an array of bondholder lawsuits at a time when many of its regional casinos are struggling.

What Happened to the Lady Gambler?

Two new factors appear to be at work.

The East Coast gaming market has become saturated or at least unbalanced. Casinos in Atlantic City are closing as new “slot shops” in Delaware, Pennsylvania and Maryland drain off customers.

But perhaps more significant over the long run, Caesars is suffering from the decline of its once reliable cadre of older gamblers. The hordes of middle-aged-and-up women that had been bused to Atlantic City to play the slots dried up after the 2008 collapse.

This was the demographic that Loveman knew best. It was the market that his company’s proprietary software relentlessly mined for information on how best to induce them to spend more bucks at a Horseshoe or Bally’s.

Whether extending the Caesars brand to places like Baltimore will lure enough old customers – and attract new ones – to appease the company’s restive bondholders is a question of probabilities that will be played out in real time over the next few months and year.