The 11th District has gained a new councilman, political novice Eric T. Costello, but has lost its standing in the political hierarchy that counts in the City Council – committee assignments.

In the wake of William H. Cole IV’s resignation to become president of the Baltimore Development Corporation, the 11th District has been removed from three of the seven committees that Cole had occupied.

Most striking is Costello’s exclusion from the Taxation, Finance and Economic Development Committee. The 11th District encompasses the heart of the city (from Bolton Hill south through Mt. Vernon and downtown to the South Baltimore peninsula) with the largest tax base of any Council district.

It also brings in the bulk of the city’s hotel, entertainment, parking and related taxes by virtue of its rich array of Class A office space and as the site of Harborplace, Baltimore Convention Center, Oriole Park at Camden Yards, Baltimore (soon-to-be Royal Farms) Arena and the National Aquarium.

Business executives and developers seeking TIF or PILOT tax breaks can always go to Cole, as president of the city’s quasi-public development agency, to discuss their plans.

Where does that leave Costello? He can’t participate, with anything like his predecessor’s clout, in projects in his own district. South Baltimore has become a hotbed for development. Caves Valley Partners’ proposed $250 million “Stadium Square” is in play in Sharp-Leadenhall, and Kevin Plank is involved in the redevelopment of Port Covington.

With two years left before his term expires, Costello needs to persuade developers and other power players that a campaign contribution toward his political future is a worthy investment. 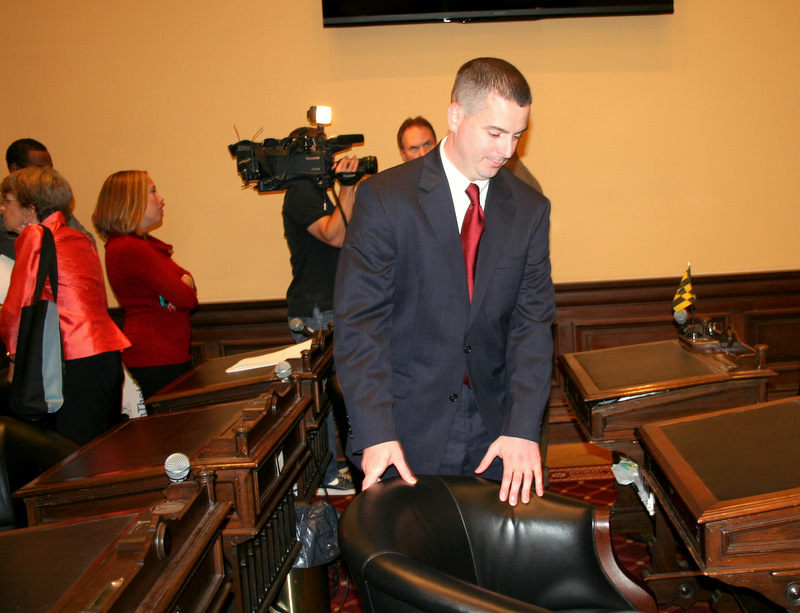 The 12 Council committees are the workhorses of the body. All proposed ordinances are assigned to committees, which either bring the legislation back to the full body for final votes or stop it in its tracks.

This week’s reshuffling of committee appointments was the work of Council President Bernard C. “Jack” Young, who engineered Costello’s selection to the 11th District vacancy, but seems to have forgotten to give him a road map to chart his course in the chamber.

Young obviously had other considerations in mind.

Placating the Council’s more ambitious members (such as Nick Mosby) was one factor in the “musical chairs” selection process. Rewarding seniority (read Helen Holton) and gratifying a close ally (Carl Stokes) were also matters high on the list.

Mosby, a first-term Councilman whose wife, Marilyn, is running unopposed in next month’s city state’s attorney race, picked up Cole’s seat on the powerful Budget and Appropriations Committee. He was also promoted to vice chairman of the Housing Committee.

Holton replaced Cole on the Taxation and Finance Committee, while Stokes was given Cole’s chairmanship of Recreation and Parks.

The four seats handed to Costello – on Executive Appointments, Health, Recreation and Parks, and Public Safety – are pretty thankless.

Public Safety, for example, hears public complaints about the police department, but mostly gets told how the Rawlings-Blake administration will handle public safety matters. When the mayor decided to close down two fire companies – including one in committee chairman Warren Branch’s own district – the panel was helpless to stop the decision.

Executive Appointments famously rubber-stamps the mayor’s appointees after five- or 10-minute sessions with a candidate. Cole had headed the committee; we can only hope that the new chair, William “Pete” Welch, remembers to go to the hearings given his reputation for skipping out on his current committee assignments.

Helen Holton’s return to the Taxation and Finance Committee amounts to a comeback for the 8th District veteran.

Two years ago, Young stripped Holton of her chairmanship of the committee after she pleaded “no contest” to the charge of asking two developers to pay for a $12,500 poll that exceeded the limits on political donations and circumvented campaign finance laws.

As the committee’s chairman, Holton had helped orchestrate tax breaks for the developers, bakery magnate John Paterakis and Ronald H. Lipscomb. Now she’s back on the five-member panel headed by Stokes.