Baltimore’s inclusionary housing program, designed to ensure that lower-income residents have housing options in new developments, has only $70,000 left in its coffers, an advisory board was told on Monday.

As a stop-gap measure, the Board of Estimates today approved a $60,000 transfer of city bond money to the fund. The money will pay for seven affordable rental units at 520 Park Avenue, a new apartment complex in Mt. Vernon, leaving the fund with the same $70,000 balance.

“We didn’t want to spend the inclusionary housing money on this and found other funding that we could use,” Cheron Porter, a housing department spokesperson, told The Brew. The source of funding was described as a discretionary housing development bond fund reserve.

The transfer underscores the scarce resources available for subsidized housing in Baltimore under a program that started off with high hopes in 2007 with a $2 million budget.

The Inclusionary Housing Act requires developers of 30 or more units that receive public subsidies, such as TIFs (tax increment financing) and PILOTS (payment in lieu of taxes), to set aside 20% as low-cost units.

The law was designed to place no financial burden on the developer or project by requiring the city to buy or rent units at market rate and make the units available to individuals who meet certain income requirements.

But with only $70,000 left in the pot, the offset fund can’t buy very much, the Inclusionary Housing Board was told on Monday.

Mark Sissman, director of Healthy Neighborhoods, who sits on the board, said, tongue in cheek, that the City Council might need to be reminded of how the offset fund works.

“Developers create units and the city [needs] money to buy the units. The units don’t come out of thin air,” he said.

As for the fund’s future appropriations, Sissman said later, speaking only for himself: “You have to ask the housing commissioner,” referring to Paul T. Graziano.

According to spokesperson Porter, the $60,000 appropriated by the Board of Estimates is “a relatively small amount. Finding large sums to spent on IH is another matter and extremely difficult.”

The board on Monday was drafting its annual report to the City Council. The report is required by law to answer several questions about the program’s success and finances, including the number of affordable housing units generated under the law and a list of waivers and variances requested (two waivers were granted this year).

According to Michael Pokorny, the housing department’s liaison to the board, only 25 affordable units have been created since the law took effect – ten in 2008, ten in 2010 and five in 2013 – and seven more when the Park Ave. units approved today are finalized. 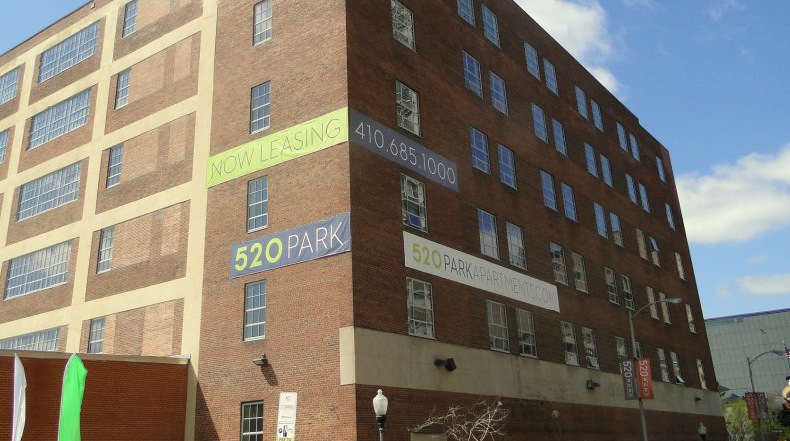 Ruth Louie, who chairs the board, said flatly, “What we have here is an ordinance that is not working.”

“How can we even accomplish this?” asked Louie, who is CEO of Baltimore Community Lending, referring to the goal of the legislation.

Laurie Feinberg, who represents the planning department, said “tell the Council the draft needs work and we need an extension.” The board requested an extension until their November meeting.

During the public comment phase of the meeting, C. Matthew Hill, a lawyer with the Public Justice Center, recommended several amendments to the law that would make it serve a larger number of lower-income people.

These included eliminating loopholes that allow the housing commissioner to exempt a given project if there are insufficient offset funds.

For example, the Park Ave. project would have required 34 inclusionary units (20% of the 171 units), if full funding were available. Last year, the city excluded Michael Beatty’s Harbor Point project from inclusionary housing – despite the project receiving $107 million in city tax incentives.

[Editor’s Note: While exempt from the inclusionary housing law, developer Beatty has agreed to voluntarily contribute as much as $3 million to the IH fund, if Harbor Point completes its projected build-out of over 1,000 residential units by the early 2020s.]

Hill also advocated for funding more units for lower-income families who earn below 30% of median area income for rentals and below 60% Area Median Income (AMI) for homeownship.

The Park Ave. rental units, according to the housing department, will go to households earning less than 100% of the AMI and will include five one-bedroom units and two efficiency units.

One efficiency will be made available to a household earning less than 80% of the AMI, which is still, comparatively, a middle-class income.

Hill also recommended increasing the decision-making power of the Inclusionary Housing Board.

“We offer advice. We don’t make decisions,” said Sissman, who added, “We all have opinions on how the law should be changed, but ultimately it’s the City Council who makes those decisions.”

Who Do You Represent?

About 40 people attended Monday’s board meeting at City Hall. Quandra Gaines, who works for the Men and Family Center in East Baltimore, asked how the board represented those who live in public housing.

“Well then, who do you represent?” Gaines asked.

The board, which was appointed by Mayor Stephanie Rawlings-Blake and has been in existence for about a year, said it has nothing to do with public housing issues.

Still, advocates for those groups made their concerns about Baltimore’s housing shortages known.

Lauren Siegel, a volunteer with Housing Our Neighbors, said the inclusionary housing law works somewhat, but primarily for middle- or lower-middle-income people – not for the poor or homeless.

“It’s not bad that a school teacher can get a place to live,” Siegel said. “But what about everyone else?”