At a meeting last night at Mercy High School about “all things water,” as City Councilman Bill Henry put it, participants asked officials about touchy topics including the storm-water runoff tax imposed by the state and new “smart meters” being installed by the city.

But the subject that generated the most interest – and toughest questions – was the water pipe protection plan the city is recommending citizens buy from a Connecticut-based company called HomeServe.

“Let’s talk about the water pipe insurance,” a woman called out, in a measured but firm tone, after an hour focused on other topics.

Addressing the audience of about 75 Northeast Baltimore residents, after presentations by the Department of Public Works and Blue Water Baltimore, a company representative stepped forward.

“How many people here have homes that are over 50 years old?” asked Myles Meehan, a HomeServe senior vice president. 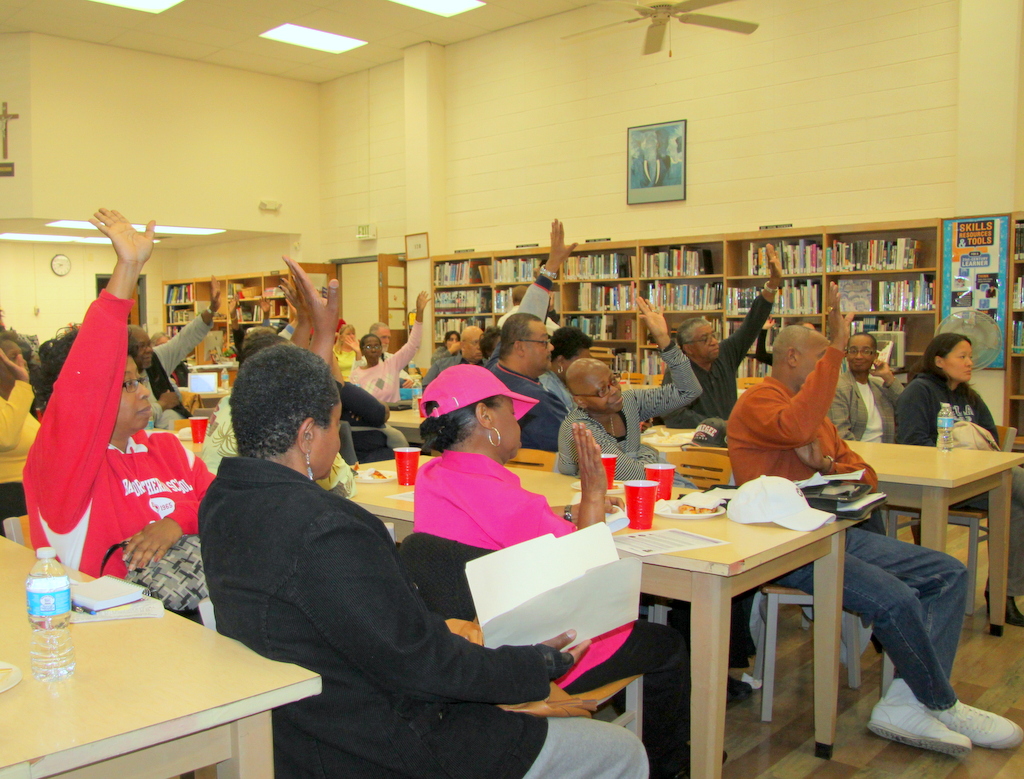 How many here have pipes over 50 years old, the HomeServe representative asked? Many raised their hands. (Photo by Fern Shen)

Hands shot up all around.

“You’d better pay attention,” Meehan said. “This is a program you’re going to want to look into!”

In the wake of constituent concern and questions about the city’s HomeServe partnership, Henry arranged for Meehan to address one of the topical town halls he periodically organizes for his 4th District constituents.

Meehan proceeded to give the kind of report that groups of citizens usually hear from city bureaucrats. He said HomeServe’s program, partnering with the city to offer the warranty protection “at a special rate,” began on September 28.

“So far, we’ve already done 31 water line replacements,” he said, adding that two of them were done this week, one in Rosemont and one in Guilford.

Meehan fielded a number of questions, some from audience members who had already signed up and others wondering if they should.

“Why does the pipe under your house break? What’s the cause of it?” a woman asked.

“Why do I need this insurance?” another asked. “Is there an alternative to it?”

“If you’re living in a house that’s 50 years old or older, you’re going to need it eventually,” Meehan said.

Meehan showed slides touting the company’s size (claiming to be providing protection plans to 1.6 million homeowners in the U.S. and Canada) and indicating the price offered in Baltimore ($5.99 per month for the first year and $8.99 per month upon renewal). 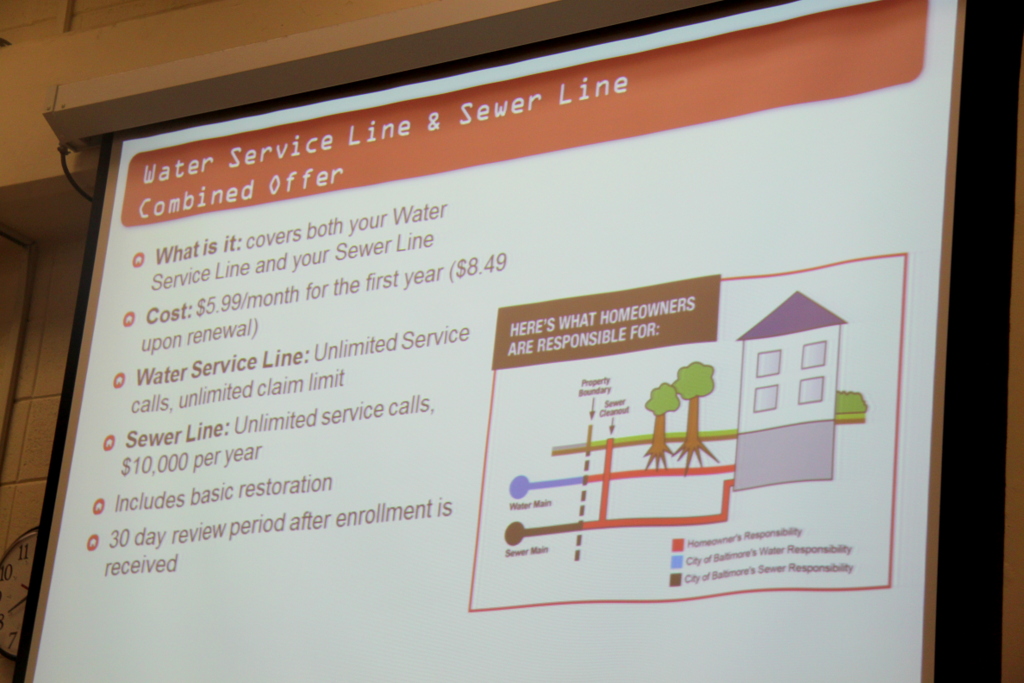 HomeServe program in partnership with Baltimore city would cost $5.99 a month the first year and increase after that. (Photo by Fern Shen)

“You’re saying if you replaced my pipes, they’d only be guaranteed for a year,” asked one person.

“Yes but if we replaced your pipes, you’re good to go, you’re set,” Meehan said.

Another questioner had signed up for HomeServe, but was left wondering what comes next.

“I enrolled, when will I receive information about what’s really covered?” the woman asked. “I mailed my check.”

Meehan said she should be receiving a “welcome kit” in about two weeks.

HomeServe Doesn’t do the Repairs

Another audience member appeared to be just grasping HomeServe’s role, providing a warranty against water pipe replacement, which can cost thousands of dollars.

“You’re not a company that actually does the work?” he asked.

Meehan explained that HomeServe identifies contractors to do the replacement job. The questioner pressed further, asking, “Doesn’t that increase the price? Because you’re like a middleman?”

Meehan said that was true. “We do increase the price.”

Some in the audience were skeptical about HomeServe but their concerns were outweighed, it seemed, by their desire for security against a costly pipe repair.

Edward T. Wilson, for instance, signed up for HomeServe even though he replaced the water lines in his home 15 years ago and “now I’ve got copper pipes.”

“I like to be safe,” he explained with a shrug.

He predicted that HomeServe’s prices will increase – just like the city’s water rates. “Every year you’ve got to renew and it will be at a higher price It’s going to get up to $20 [a month]. But by that time, I’ll be in the nursing home.”