On Friday, residents were cheering housing officials for acting quickly to stop illegal dumpers at Herring Run Park, but questioning why a police officer on the scene declined to take action, saying he had no jurisdiction.

Simply put, the officer “was wrong,” Major Richard Worley, commander of the Northeastern District, said in response to complaints from the community.

“He could have written a citation or made an arrest. Worse case scenario, he could have contacted our environmental crimes unit for guidance,” Worley wrote in an email to the Waltherson Improvement Association.

The park dumping saga took place on Thursday, when citizens saw a pick-up truck laden with old furniture, a toilet and construction debris that had gotten stuck in the park.

According to Patty Dowd, a Friends of Herring Run Park coordinator who had called police to the scene, the officer who responded didn’t cite the dumpers or write up a report and said a park ranger was needed. 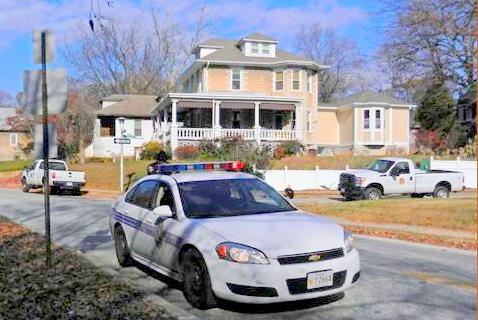 An officer responded to the scene of alleged illegal dumping at Herring Run Park, but said he had no jurisdiction to charge the dumpers. (Photo by Patty Dowd)

The Housing Department’s Code Enforcement division eventually stepped in to impound the vehicle, but the response by the police officer was confounding. (Residents identified the officer as “P. White.” Online employment records show there is a police officer named Preston White.)

“The whole incident could have been handled better,” Worley acknowledged in his Sunday email, “but it is something they don’t handle much and they should have asked for guidance.”

He told the Waltherson group, “It has already been addressed with the officers and supervisors so it won’t happen again.”

Truck Owner Turns Himself In

Thomas Waugh, chief of Baltimore Housing’s Special Investigative Unit, said the owner of the truck, whose name has not been released, came in to talk to Code Enforcement yesterday.

“I just got done interviewing the owner of the truck, who was also the driver. He will be criminally charged with illegal dumping,” Waugh said.

The charges are expected to be filed by the City State’s Attorney in District Court.

Waugh says it is unclear whether he will be charged with dumping less than or more than 100 pounds. The weight of the dumped material has not yet been determined.

“We also have the name of a possible co-conspirator who may be charged as well,” Waugh added. “I have not been able to locate the woman, who was mentioned. I believe she is the driver’s girlfriend.”

A Hold on the Vehicle

Not only has the truck been impounded, says Waugh, it has also been seized as evidence.

“We can hold the vehicle until the case goes before the judge,” he says.

Aside from losing his vehicle for the foreseeable future, the alleged dumper has to pay for any impounding, extrication, and removal fees.

GPS led me There, says Dumper

Code Enforcement officials confronted the alleged dumper about why he chose to dump in a neighborhood park when legal dumping options are within a few miles drive of Northeast Baltimore city.

“The driver said he typed in ‘Baltimore dump site’ and this is where the GPS told him to go,” explains Waugh, who was more than a little skeptical.

He noted that there is no park entrance in this spot (the dumping occurred off of Parkside Drive and Tyndale Avenue).

The park, which has had a chronic problem with illegal dumpers, is plastered with warnings about dumping.

“Basically, they drove their truck into a ravine situated between a ‘No Dumping’ and ‘No Littering’ sign,” Waugh said. “They didn’t want people to see them. They knew what they were doing.”

Neighbors said the truck, full of junk and furniture, had tried to enter Herring Run Park from two other entrances earlier that day but was turned away by residents.