While Sanchez’s involvement with Malone was characterized as “inappropriate” in a report today by Inspector General Robert H. Pearre Jr., no charges of ethical or procurement violations were leveled against the mayor’s former top aide.

Pearre also did not uncover any financial gain to Sanchez from his alleged involvement with Xerox.

Sanchez resigned as chief of staff last May and is currently COO for Goodwill Industries International in Rockville Md. A message left at his office seeking comment has not been answered.

Malone declined to discuss the matter tonight, saying, “I haven’t reviewed the report with my client.”

Mayor Stephanie Rawlings-Blake famously officiated at the wedding of Malone and Jones in May 2013 in Las Vegas, an event that attracted leading city and state elected officials. The couple are partners in the lobby firm, Harris Jones & Malone.

The disclosure of Sanchez’s role in the Xerox contract is part of a lengthy report by Pearre on the city’s problem-plagued and now-suspended Automated Traffic Violation Enforcement System (speed camera) program. 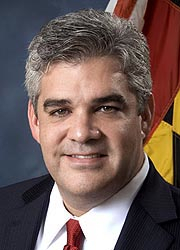 The AG said that his investigation was hobbled by the lack of cooperation by key agencies, including the Department of Transportation and Police Department, as well as from Brekford and Xerox.

“The difficulty the OIG [Office of Inspector General] experienced in obtaining required documentation, reliable data and access to key personnel for interviews from vendors and city agencies unfortunately resulted in important questions about the ATVES program that remain unanswered.”

The report does not disclose whether he interviewed Sanchez or Malone.

Regarding what Pearre called Sanchez’s “inappropriate involvement and efforts to intervene” on behalf of Xerox, the former city official “issued directives in direct contrast to the procurement team’s decisions in an apparent effort to steer the contract award to Xerox.”

The report describes numerous cell phone calls between Malone and Sanchez when it became known by Sanchez, in his position as COS, that Brekford was given higher scores by the procurement team and was in line to win the speed camera contract.

“How did they [Xerox] know?” former DOT director Khalil Zaied asked a city engineer about what was supposed to be a confidential process.

“I have no clue,” the engineer replied.

The IG says that the evidence points to the information coming from Sanchez speaking to Malone.

“Given the chief of staff’s privileged insight into the confidential bidding process, and his coinciding email and phone correspondence with city officials involved in the ATVES contract award and known Xerox representatives, the OIG believes the chief of staff used the influence of his office in an attempt to benefit the best interests of Xerox over those of the city and taxpayers,” the report states.

In the course of describing Sanchez’s efforts allegedly on behalf of Xerox, the report reveals that the chief of staff had a key insight – that the city was not ready to turn over the speed camera program to Brekford.

In a December 22, 2012 email to DOT director Zaied, Sanchez pointed out correctly that forcing Xerox to stop the program on January 1, 2013 could result in chaos.

Should the city “keep the lines of communication open with Xerox for another month,” Sanchez asked. “Seems better than an abrupt end on Jan 1, holding back payments, ensuing lawsuits and the program going dark because Brekford isn’t ready.”

His concerns were dismissed by a former DOT traffic supervisor, who instead advised, “Why don’t we just cut our loses with Xerox on 1/1?. . . The problems that Brekford will face when they take over will only be delayed.”

The speed camera program was formally suspended by Mayor Rawlings-Blake four months later.
———————————————-
UPDATE: This statement  from the mayor was released this evening via her Twitter account:

“I want to thank the Inspector General for his thorough investigation into the Baltimore City speed camera program. We will build on these recommendations to ensure Baltimore City gets it right. The recommendations from this report will be adopted to ensure our future program is transparent, reliable and accurate for the citizens of Baltimore City. The actions of my former Chief of Staff Alex Sanchez had no influence over my participation in the contract bid between Xerox and Brekford. This is evidenced by my vote at the Board of Estimates to award the contract to Brekford despite protests from Xerox. The Inspector General confirms this contention in his report, and my hope is that Mr. Sanchez will respond to the Inspector General’s request to talk through the issues raised.”