Citing the Christian value of forgiveness, officials of the Episcopal Diocese of Maryland said today that Bishop Heather Cook disclosed her 2010 drunk driving and marijuana arrest, but that they decided it should not disqualify her from consideration to serve as bishop.

“One of the core values of the Christian faith is forgiveness. We cannot preach forgiveness without practicing forgiveness and offering people opportunity for redemption,” said the statement from the director of communications for the Baltimore-based diocese.

Cook’s arrest on the Eastern Shore has been in the spotlight since the 58-year-old “Bishop Suffragan” was identified as the driver of the car that hit bicyclist Thomas Palermo Saturday. Cook initially left the scene of the crash, returning after being chased to an apartment complex by a bicyclist. Palermo was pronounced dead at Sinai Hospital.

Since the crash, diocesan officials have been peppered with questions about whether they knew of Cook’s arrest record when she was placed into consideration for, essentially, the #2 spot in the diocese. She was elected to serve as bishop in May.

“As part of the search process, Bishop Cook fully disclosed the 2010 DUI for which charges were filed resulting in a ‘probation before judgment.’ After extensive discussion and discernment about the incident, and after further investigation, including extensive background check and psychological investigation, it was determined that this one mistake should not bar her for consideration as a leader,” said the statement, which was posted on the webpage for the diocese.

Cook was sentenced to probation before judgment for the driving under the influence charges and successfully completed her probation. The drug possession and paraphernalia charges were dropped.

Today’s statement (which follows an earlier release by Cook’s superior, Bishop Eugene Taylor Sutton) acknowledges the furor that has erupted since the crash, particularly Cook’s failure to remain at the scene.

“We, too are all filled with questions for which there are still no answers, and we are all filled with anger, bitterness, pain and tears. Our thoughts and prayers right now are with Mr. Palermo, his family and friends, and the bicycling community. And, we continue to pray for Bishop Cook in this time of her tremendous grief and sorrow.”

Baltimore Police have filed no charges in connection with the fatal crash and said yesterday they are not releasing details of the incident because to do so would jeopardize their investigation. 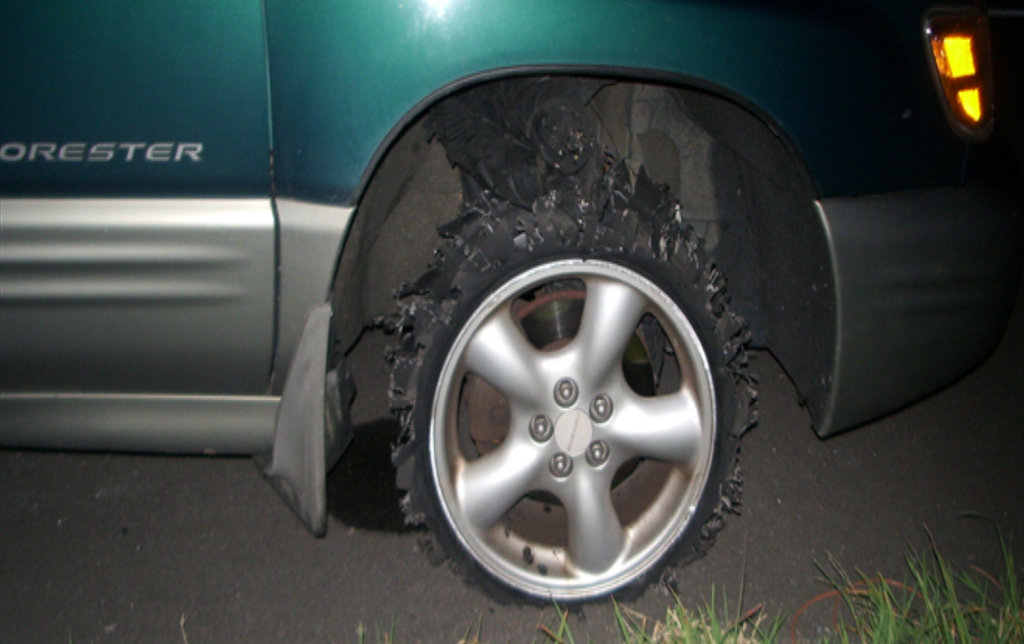 The front passenger side tire was separated from the rim, according to the 17-page police report on her arrest obtained by The Brew from the Caroline County Sheriff’s Office.

“I investigated the burned rubber smell and found the front passenger side tire to be completely shredded from the rim. (A later search did not find the tire or any parts of it) It appeared that Cook had been riding on the rim for some distance,” wrote Deputy 1st Class Justin Reibly, in the narrative included in the case report summary.

Police administered several field sobriety tests to Cook, whom police described as “mumbling” and “incoherent.” Cook failed all of them and later registered a blood alcohol level of .27.

When asked if she had been drinking, the report states that Cook told police she had stopped in Pennsylvania and had a few drinks. Bottles of alcohol (wine and Jameson whiskey) were found in Cook’s car, along with two bags of marijuana and a smoking device on the front seat.

Additionally, the report states, “Cook admitted to smoking the marijuana and drinking the alcohol while driving from Canada to her home in Hurlock, Maryland.”

Also included in the report are the original charges filed against the then 53-year-old Cook: 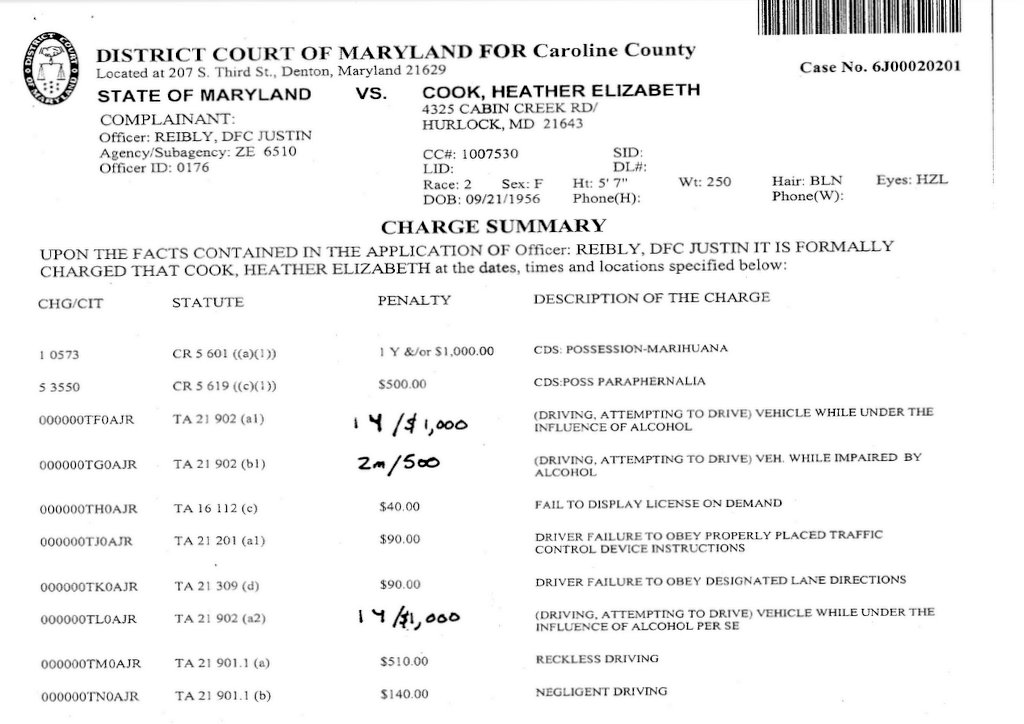