The Rawlings-Blake administration is in the early stages of developing a municipal marketing initiative that would include selling advertising on municipal properties.

• “This bathroom brought to you by Charmin” slapped on stall doors at branch Enoch Pratts?

The Department of Finance has issued a Request For Information (RFI) seeking industry feedback on “advertising alternatives that will assist the City in generating the maximum value for the City’s general fund operating budget.”

Other cities, such as Chicago, have launched similar municipal marketing ventures with varying degrees of success.

Baltimore is already engaged in small-scale municipal marketing efforts, such as the ongoing sale of advertising on Circulator buses, which the city needs to help fund the service. The city recently sold naming rights to the downtown Arena (née Baltimore Civic Center) to Royal Farms for $1.25 million.

Aside from generating revenue, the city hopes its municipal marketing program will enhance its “regional, national and international profile.” 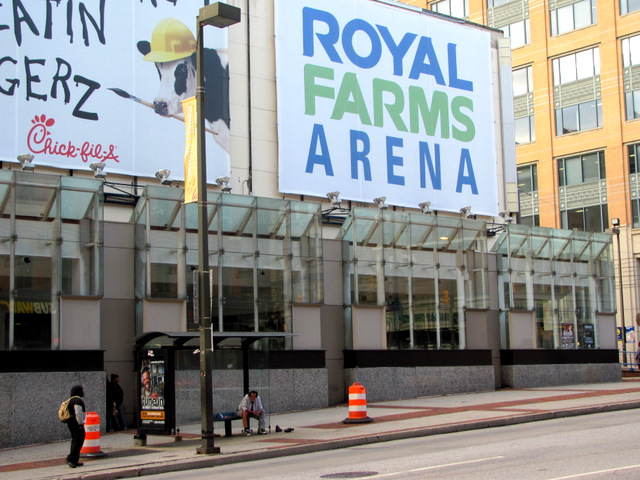 The city-owned arena features a battery of billboard advertising along its outer walls. This view is at Baltimore Street near Howard. (Photo by Mark Reutter)

The city plans to use the information gathered to suggest modifications to city zoning laws – as necessary – to issue an RFP (Request for Proposals) soliciting advertising and marketing plans from companies who have experience with municipal marketing ventures.

“The City is interested in exploring the potential for modifying (or possibly eliminating) these Zoning Code restrictions,” the document states, tentatively.

And yet, respondents to the RFI are told to assume that the city code will be modified “to allow firms to advertise on the outside of city-owned buildings.”

The document points out that the city is aware of the “social impacts” of municipal advertising and says the city will “entertain comments from citizens and community organizations about the potential effects” at a later date.

No Ads for Tobacco, Guns or Alcohol

The kinds of ads allowed on city property would be restricted.

Those of a sexual nature or ads that support or oppose political candidates would be forbidden. So would ads for alcohol, guns or tobacco products.

And certain city facilities won’t be available for marketing purposes at all, either because they are under the control of other government or commercial entities, or because “of a sensitive community or historic nature.”

Those most likely to be excluded from a future RFP include public school buildings, bus or Light Rail shelters installed and managed by the Maryland Transit Administration, the Walters Art Museum, the Edgar Allan Poe House and any property designated as historic or preserved.

According to Citibuy, Baltimore’s procurement website, a number of advertising, marketing and media companies have downloaded the RFI.

Among them, Adrian Harpool Associates, a public affairs firm owned by the former campaign manager of City Council President Bernard “Jack” Young, and Mjach Designs, which had a contract to perform marketing for the Charm City Circulator.

When the city plans on launching its municipal marketing program is not known. Several e-mails from The Brew to the mayor’s office and the Department of General Services regarding the status of Baltimore’s Municipal Marketing Initiative – such as who will be running it and when an RFP could be issued – were not returned.